Only RJD, IUML and the DMK voted against the bill, while the AIADMK, AAP and the CPI walked out 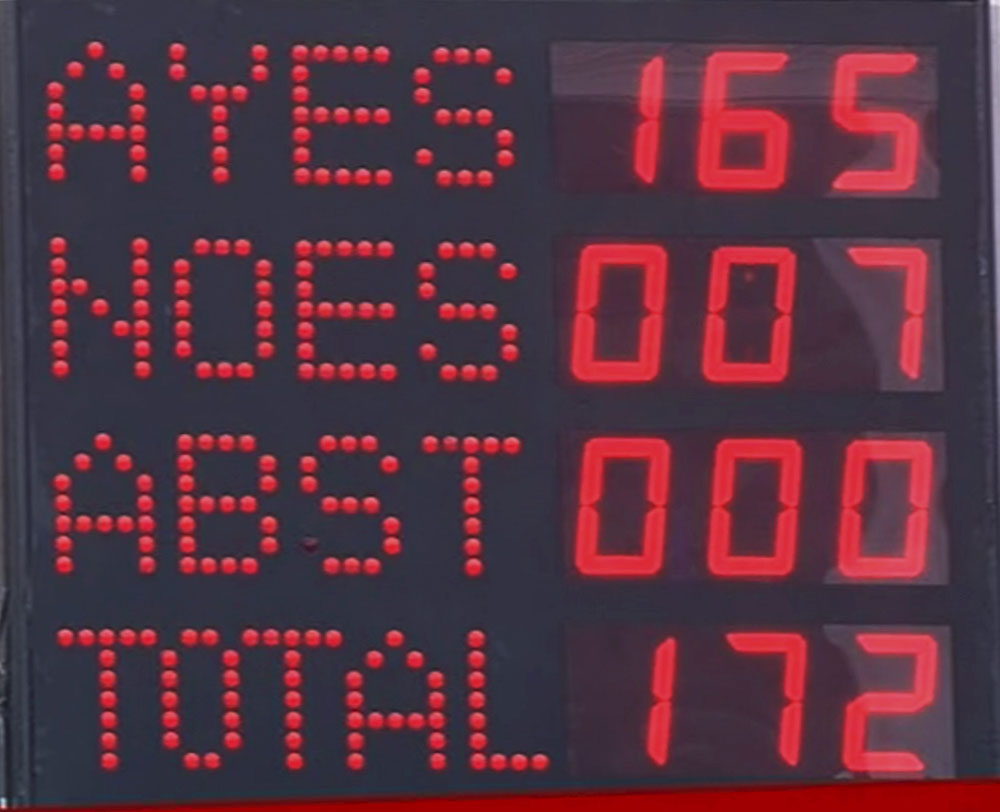 A screen displays the results of voting on the bill to provide 10 per cent reservation in jobs and educational institutions to economically backward section in the general category, in Rajya Sabha in New Delhi on Wednesday.
(PTI)
Anita Joshua   |   New Delhi   |   Published 09.01.19, 10:20 PM

The Centre on Wednesday night cleared the Rajya Sabha hurdle on the upper caste quota bill that was likened by the Opposition to “demonetisation” and triggered demands for caste-based reservation to be increased in proportion to population now that the court-imposed 50 per cent ceiling on quotas has been breached.

The bill to provide a 10 per cent quota in jobs and higher education to the economically weaker sections among the upper castes was passed with 165 votes in its favour and seven against. Only the Rashtriya Janata Dal, IUML and the DMK voted against the bill, while the AIADMK, AAP and the CPI walked out. The rest of the Opposition, led by the Congress, voted for it while questioning the haste with which it was brought.

The BSP and the Samajwadi Party said since the government had decided to increase the total reserved category to 59.5 per cent with the bill, reservation should now be proportional to the numerical strength of different caste groups.

Flagging the issue, the SP’s Ramgopal Yadav said the OBC quota was capped at 27 per cent, even though the backward classes constitute 54 per cent of the population, because of the Supreme Court order that reservation should not exceed 50 per cent.

“Now that you have broken the 50 per cent barrier, the OBCs should be given 54 per cent reservation and the quota for SCs and STs should be increased to 25 per cent to match their population,” he said.

The BSP’s Satish Mishra flagged the need to increase the quota for the historically disadvantaged castes in line with their population. He likened the government’s move to rush the bill to attempting a sixer off the last ball of a cricket match.

The bill was signed by social justice minister Thawarchand Gehlot on Monday, introduced and cleared by the Lok Sabha on Tuesday, and brought to the Rajya Sabha on Wednesday.

Congress leader Kapil Sibal candidly admitted that all parties present were driven by political considerations in supporting the bill.

Despite serious doubts about its legal validity, the Opposition parties were wary of being labelled anti-poor if they stalled the bill. Had it been brought earlier, the Opposition would have pushed to refer it to a select committee for parliamentary scrutiny.

Sibal said the bill would fail the test of constitutionality and legality and would end up like “notebandi” (demonetisation).

Trinamul’s Derek O’Brien said: “The bill is an acknowledgement of the Modi government’s guilt over failure to create jobs.”

Like the AIADMK, the RJD accused the government of tinkering with the basic structure of the Constitution.

Gehlot said the government was sincere about the move and so had brought a constitutional amendment instead of opting for an executive order as done by various governments in the past.

A bill that the Opposition can't oppose