Advertisement
Home / India / Rajnath Singh out and then in

Rajnath Singh out and then in 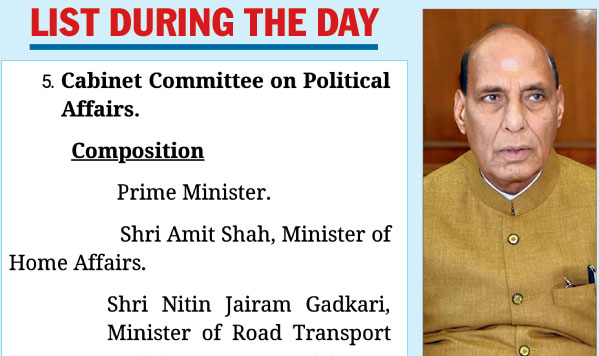 Defence minister Rajnath Singh was included in the core cabinet committee on political affairs and some other panels on Thursday night after the veteran complained about being marginalised during the day in an exercise that reaffirmed home minister Amit Shah’s dominance.

No reason was cited officially for the daylight omission and the nocturnal inclusion.

During the day, Rajnath, the technical Number Two in the government, had been included in just two of the eight cabinet committees reconstituted by the Modi government. In contrast, home minister Shah found place in all the eight committees.

Late on Thursday night, the Centre rushed to put out a “revised” list of the committees that saw Rajnath in the cabinet committee on political affairs and three others. Rajnath is now part of six, up from the earlier two, cabinet committees.

The revision, however, did not come about easily, according to sources. They said Rajnath spoke to the RSS leadership.

Another source claimed that Rajnath offered his resignation but there was no independent confirmation. “I have learnt Prime Minister Modi talked to Rajnathji and persuaded him to withdraw his resignation,” one leader said. It was after this that the “revised” list was put out, sources said.

“It was a humiliation, and Rajnathji is not a leader to take such things lying down,” a BJP leader said.

These leaders close to Rajnath, however, indicated that all was not well despite the revision. “Rajnathji is very upset,” one of these leaders said.

The two cabinet committees where Rajnath figured in the initial list itself are the committee on security, from where he couldn’t have been excluded being the defence minister, and the committee on economic affairs.

But Rajnath’s initial exclusion from the committee on political affairs reaffirmed an impression that deliberate attempts were being made to project Shah as the effective Number Two and potential successor to Modi.

It’s unusual for the political affairs committee to exclude the Number Two in the government, for it’s he or she who is expected to preside over its meetings in the Prime Minister’s absence. Rajnath is perceived to hold the technical Number Two status because he had been sworn in as minister right after Modi.

Rajnath’s omission stood out, especially against the inclusion of juniors like Nirmala Sitharaman and Piyush Goyal.

The government could not have contended that Rajnath had been excluded because the defence minister was not part of the political affairs committee in the last government. For, Sitharaman had been included in the committee after being appointed defence minister in the September 2017 shuffle.

Chaired by the Prime Minister, the committee is seen as the “core group” within the ministry, empowered to discuss and decide all the political issues the government is confronted with. It also assesses the possible political fallout of the policies the government wants to pursue.