He did not reveal details, aware that the government would come up with a better offer if he did so now 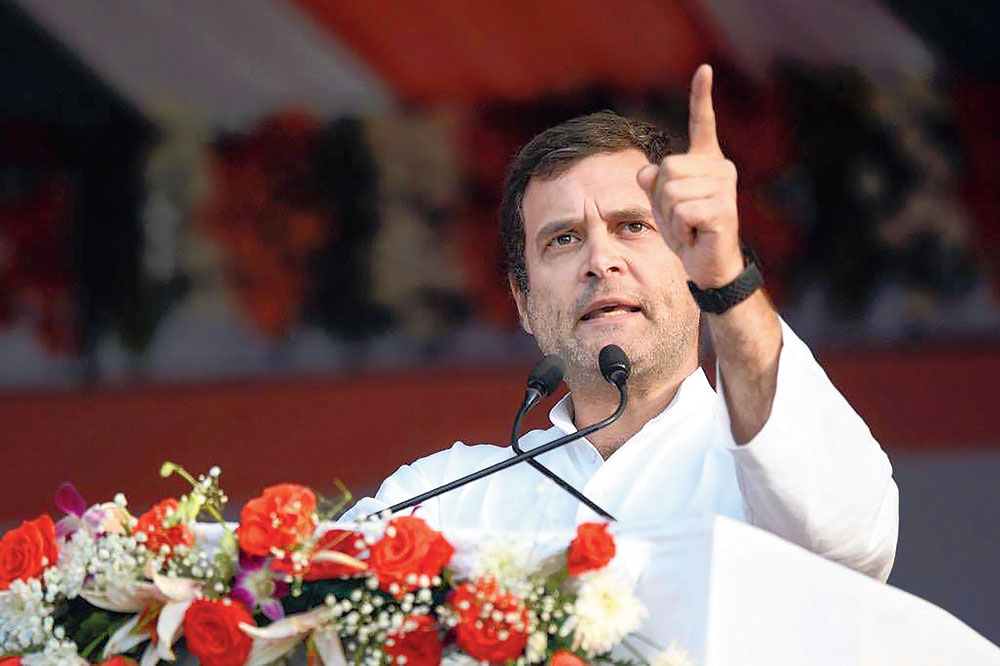 Rahul Gandhi on Monday announced that the Congress had “made up its mind” to introduce a minimum income guarantee scheme if a party-led government wrested power at the Centre, pre-empting the direct cash-transfer plan Prime Minister Narendra Modi is contemplating.

“The Congress party has made up its mind to bring a minimum income guarantee scheme,” Rahul told a rally in Raipur, Chhattisgarh.

“If our government comes (to power) in 2019, every poor will get a minimum amount in their bank account. This is a historic decision; no government in the world has so far done it.” (Some countries had experimented with a basic income scheme but not on such a large scale.)


I want to remind you that the Congress started the rights-based schemes during the UPA government’s tenure. We brought the Right to Information Act, Mahatma Gandhi National Rural Employment Guarantee Act, Food Security Act…. All these came with a legal guarantee. Now we will bring a minimum income guarantee. This exists nowhere in the world. The amount will be transferred directly to the bank accounts of the poor
- Rahul Gandhi


The Congress chief later tweeted: “We cannot build a new India while millions of our brothers & sisters suffer the scourge of poverty. If voted to power in 2019, the Congress is committed to a Minimum Income Guarantee for every poor person, to help eradicate poverty & hunger. This is our vision & our promise.”

Rahul didn’t reveal details, aware that populism was an open-ended game and the government would come up with a better offer if the Congress announced the scheme’s features now.

But by beating the government to the announcement, he has set the stage for a competitive offer of doles, keeping the option open for a better deal than the one the Modi government is set to unravel in a few days, probably in the budget session of Parliament, which starts on January 31.

The government’s scheme has been in the works for the past few weeks and the proposals are being debated in the media.

The plan has caused concern within the Opposition ranks as a direct transfer of cash to farmers or the poor is being seen as a revolutionary step, capable of evolving as a game-changer in the general election, due in summer.

Congress sources said the party manifesto would carry details of the minimum income plan, adding that Rahul’s decision to announce the plan before the Modi government unveiled its vision was aimed at avoiding the tag of a copycat.

Rahul now appears to have positioned himself well to turn the tables on the government: while he can claim credit for the scheme, he can also possibly offer something better to remain in the game of competitive populism.

The secret of TRS chief K. Chandrashekar Rao’s popularity in Telangana is said to be a set of similar schemes that ensure direct cash transfers to the bank accounts of the poor. Odisha chief minister Naveen Patnaik’s uninterrupted stint is also seen as an outcome of the effective implementation of populist schemes.

Parties like the AIADMK and the DMK too have successfully played this game in Tamil Nadu for decades.

While reports have suggested that the Modi government is working on various schemes, including the Telangana model of direct cash transfer, there is no clarity yet on the nature and contours of the final project.

Some reports had referred to a basic income scheme, but the dominant view is that the plan is to offer a farm package of Rs 4,000 an acre per season, plus interest-free crop loans of up to Rs 1 lakh for every farmer.

Rahul has steered clear of these complexities. While he doesn’t have to worry about finances at this stage, he also enjoys the flexibility of changing his plan to make it appear more lucrative than whatever the government announces.