Set up your business and think about permission after three years, the Congress chief said 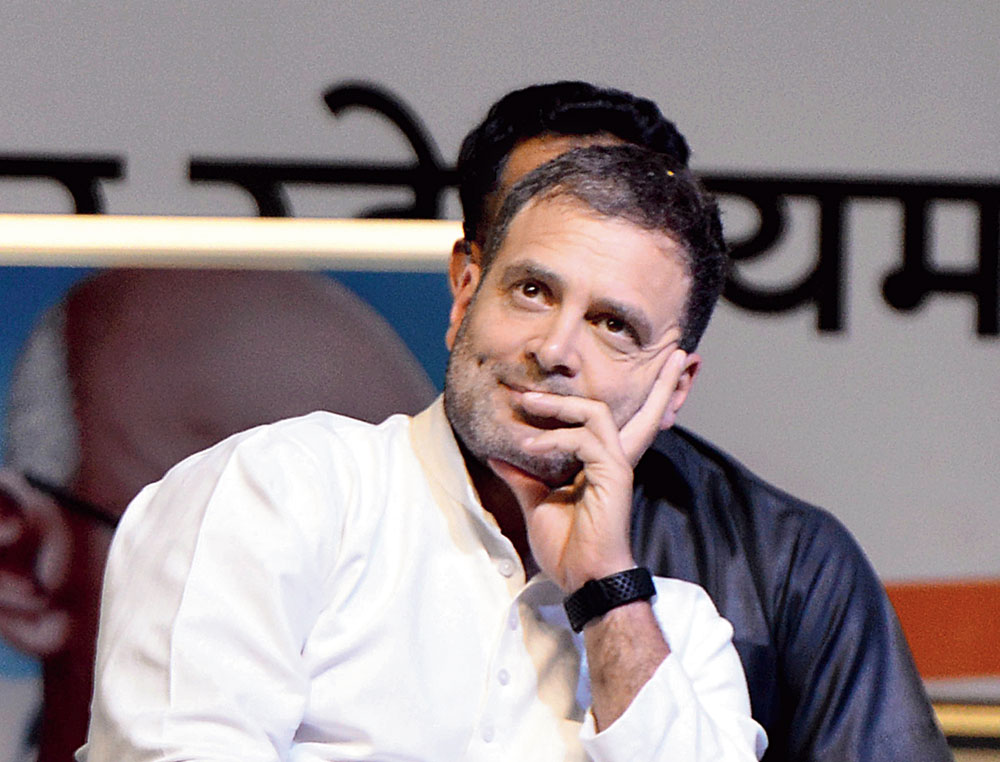 Rahul Gandhi at the national convention organised by the OBC department of the Congress in New Delhi on Wednesday.
Picture by Prem Singh
Sanjay K. Jha   |   New Delhi   |   Published 27.03.19, 10:05 PM

Rahul Gandhi on Wednesday mocked Prime Minister Narendra Modi’s attempt to make political capital out of the achievement of space scientists and went on to announce yet another lucrative scheme, this one aimed at wooing young entrepreneurs.

Addressing the Congress’s Other Backward Classes convention in New Delhi, the party president announced that young entrepreneurs would not have to take clearances from the government in the first three years of setting up small or medium-size enterprises.

This, coupled with the promised NYAY (minimum income guarantee) and right to health care schemes, will be among the major pledges in the Congress manifesto.

Rahul said: “When a youth wants to open a business, he has to seek permission from the government. Almost 50-60 clearances are needed. He has to beg for approval at several points. When our government will come, no permission will be required. Set up your business and think about permission after three years.”

Rahul took a jibe at the Prime Minister over his address to the nation on the satellite achievement. “Did you see Modi’s face when he came to make the announcement? He halted the country for 45 minutes and then came. You saw his face? Baat unke samajh mein aa gayi hai. He has understood that the Congress has started giving NYAY (justice),” the Congress leader said.

The Congress chief compared Modi’s perceived posturing with his concrete promises, saying: “I am not Modi, I don’t lie. I won’t promise Rs 15 lakh but I am giving a guarantee that every poor person will get Rs 72,000 in their accounts in a year under NYAY; Rs 3.5 lakh in five years. Modi lied. I don’t. I said farm loan will be waived; it was done in three Congress-ruled states. Now I am promising this freedom for young entrepreneurs.”

Congress research department head Rajeev Gowda explained in a series of tweets: “We promise to liberate entrepreneurs, MSMEs and start-ups from inspector raj. They will be exempt from all applicable laws and regulations (except Minimum Wages Act & tax laws) for three years.

“Our MSMEs need this healing touch after demonetisation & GST. This will spur job creation & unleash animal spirits! The Government of Rajasthan has already initiated a similar model of regulatory forbearance. We will take this nationally & unleash a wave of entrepreneurship that will transform India!”

In Rajasthan, businessmen are now able to start an enterprise on the basis of self-declarations, without inspections or approvals. According to the new provisions, an entrepreneur only has to submit a “declaration of intent” for setting up an enterprise to the nodal agency, which issues an “acknowledgment certificate”.

This arrangement spares businessmen from the urgency of approvals and inspections for three years. After three years, all necessary approvals have to be taken within the next six months.

On the satellite feat, Congress communications chief Randeep Surjewala said: “We had created building blocks for this project and they finally experimented it today. The space mission was set up by Jawaharlal Nehru and our scientists achieved several feats.”

Surjewala added: “When you are left with nothing, when the ground is slipping from beneath, when every section of the society is angry and restless, his (Modi’s) desperation can be understood. This is the same man who wants to shut down HAL, which works closely with the DRDO.”

Congress leader Priyanka Gandhi Vadra said on Wednesday that she was “very very proud of the DRDO, which is one of India’s great institutions founded by Jawaharlal Nehru”.

Priyanka said she would contest the Lok Sabha polls if her party wanted.