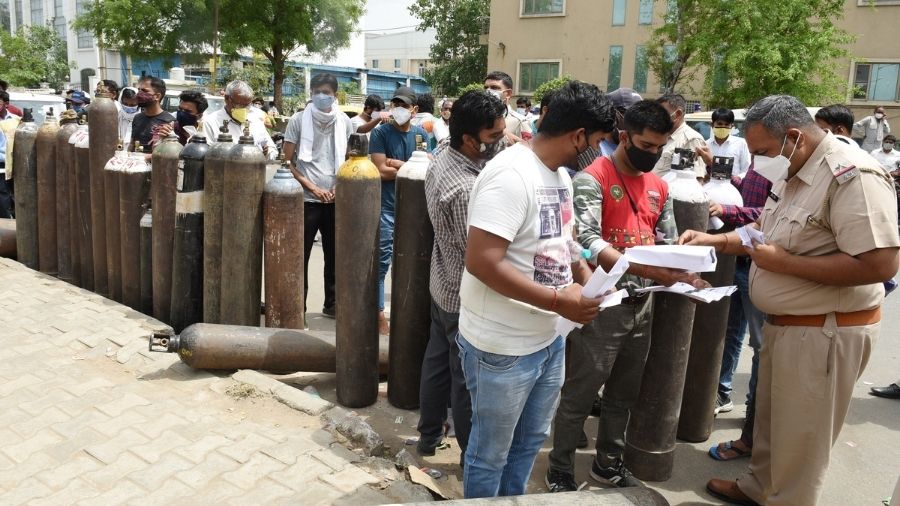 Putting officers in jail is not going to bring oxygen to Delhi, the Supreme Court said on Wednesday while it asked the Centre about the supply it has made to the national capital since May 3.

"Let us ensure lives are saved," it said.

The top court is hearing Centre's appeal against Delhi High Court's Tuesday order of issuing contempt notice and seeking personal appearance of its officials for non-compliance with the directions on supply of oxygen to treat Covid-19 patients in the national capital.

A bench headed by Justice D Y Chandrachud said that it had ordered supply of 700 MT oxygen to Delhi daily from May 3 as the pandemic in Delhi is at a very critical stage .

Putting officers in jail is not going to bring oxygen to the city, let us ensure lives are saved, said the bench which also comprised justice M R Shah.

This is not adversarial litigation. Centre, Delhi governments are elected and doing their best to serve Covid-19 patients, Solicitor General Tushar Mehta said.

"Tell us how much oxygen you have allocated to Delhi in the last three days," the bench said.

The hearing is still going on.

The Delhi High Court on Tuesday had asked the Centre why it would not issue a contempt notice against the government for failing to comply with the bench’s order of supplying the national capital the allocated amount of oxygen within stipulated time.

"You can put your head in sand like an ostrich, we will not," the high court told the central government.

"You are part of the city and seeing the situation yourself. No, you don't know. Are you living in ivory towers?," a bench comprising Justices Vipin Sanghi and Rekha Palli bench had asked.