14 pairs of special trains to remain suspended till Saturday, essentials likely to be hit 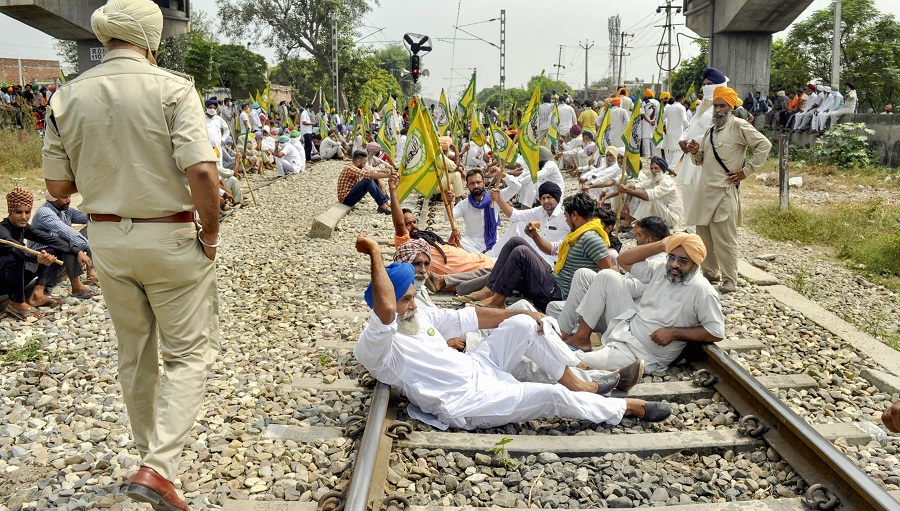 Members of various farmer organizations block a railway track during a protest against the central government over agriculture related ordinances, in Patiala on Thursday.
PTI
Our Bureau, Agencies   |   Chandigarh   |   Published 24.09.20, 03:41 PM

Farmers in Punjab on Thursday began their three-day 'rail roko' agitation to protest against the three farm bills while the Ferozepur Railway division suspended the operation of special trains due to the stir.

Railway authorities said 14 pairs of special trains will remain suspended from September 24 till 26. The decision has been taken keeping in mind the safety of passengers and protection of railway property from any damage, officials said.

At present, routine passenger train service remains suspended because of the COVID-19 pandemic.

The call for 'rail roko' agitation was given by the Kisan Mazdoor Sangharsh Committee and later, different farmers' outfits also extended their support.

Farmers under the banner of Kisan Mazdoor Sangharsh Committee have decided to squat on rail tracks near Devidaspur village in Amritsar and Basti Tanka wala in Ferozepur.

The representatives of the committee said they were getting support from several sections including government employees and labourers.

Kisan Mazdoor Sangharsh Committee president Satnam Singh Pannu said that they have appealed to representatives of political parties, ministers, MPs and MLAs not to take part in the farmers' agitation.

They vowed to gherao BJP leaders and socially boycott those who voted in favour of the farm bills.

As many as 31 farmers' outfits have given a call for the complete shutdown of Punjab on September 25 to protest against the bills.

Farmers in Punjab have expressed apprehension that the bills would pave way for dismantling the minimum support price system, leaving them at the mercy of big corporates.

The Rajya Sabha has passed the Essential Commodities (Amendment) Bill, 2020, the Farmers' Produce Trade and Commerce (Promotion and Facilitation) Bill, 2020 and the Farmers (Empowerment and Protection) Agreement of Price Assurance and Farm Services Bill, 2020.

Advertisement
Supply of essential items to be impacted

The Railways on Thursday said the agitation in Punjab is likely to severely impact loading of foodgrains and other essential goods as well as movement of passengers travelling on special trains mostly on an urgent basis.

Officials here said that Punjab loaded 990 rakes of FCI foodgrains in August this year and 816 rakes till September 23.

Thus, FCI is loading more than 35 rakes of food grains daily from Punjab.

"Punjab Rail Agitation will severely impact loading of foodgrains and other essential goods. It will hurt ordinary citizens and fast recovering Rail Freight and economy," a railway spokesperson said.