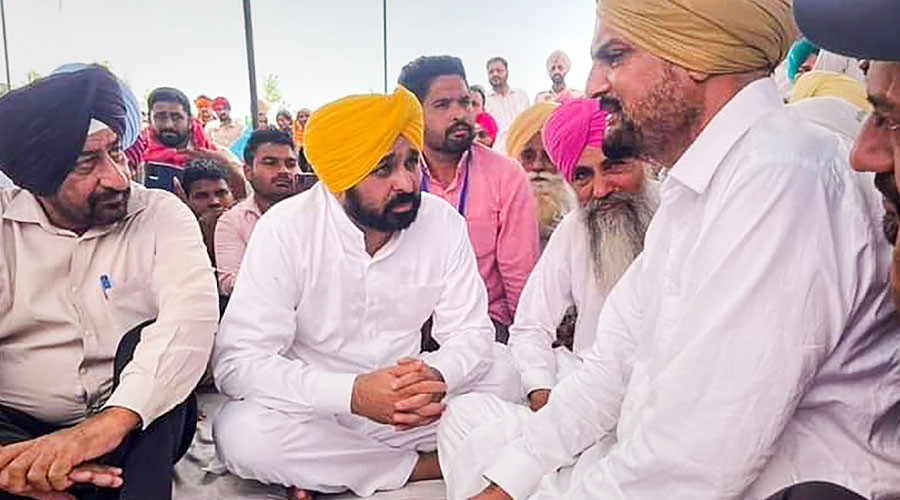 Punjab Chief Minister Bhagwant Mann visited the house of Sidhu Moosewala on Friday and conveyed his condolences to the bereaved family, days after the Punjabi singer was shot dead.

Mann reached Moosewala's house in Moosa village around 10 am and spent about an hour with the singer-politician's family. Heavy police security was deployed outside the residence of Moosewala.

The 28-year-old singer-politician was shot dead by some unidentified assailants in Punjab's Mansa district on May 29, a day after the Punjab government curtailed his security cover.

His cousin and a friend, who were travelling in a jeep with him, were also injured in the attack.

Ahead of the chief minister's visit, a few people held a protest against the Punjab Police for allegedly stopping them from entering the Moosa village by deploying heavy security.

However, the police stated that no one was being stopped from entering the village.

The protesters had also raised slogans against the state government.

"Our cars are being stopped from entering the village. Our relatives' vehicles are not being allowed to enter," a protester claimed.

The AAP accused the Congress of playing "dirty politics" over the murder of Moosewala.

The ruling party's chief spokesperson Malvinder Singh Kang alleged that some Congress leaders, including a former legislator along with supporters, were creating trouble.

"The whole of Punjab is watching them," Kang said.

On Thursday, Punjab ministers Harpal Singh Cheema and Kuldeep Singh Dhaliwal met the family of Moosewala in Mansa to condole the death of the singer.

Moosewala was among the 424 people whose security was withdrawn or curtailed by the Punjab Police on May 28 on a temporary basis.

However, the Punjab and Haryana High Court was on Thursday informed that the security cover of 424 protectees which was scaled down temporarily will be restored from June 7.

The state government had curtailed the security cover in the wake of "Ghallughara week" and the anniversary of Operation Bluestar carried out by the Army in June 1984 to flush out militants from the Golden Temple complex.

Mann has announced setting up a judicial commission headed by a sitting high court judge to probe the killing of Moosewala.