Protesters storm jail, drag out rape accused and beat him to death in Dimapur 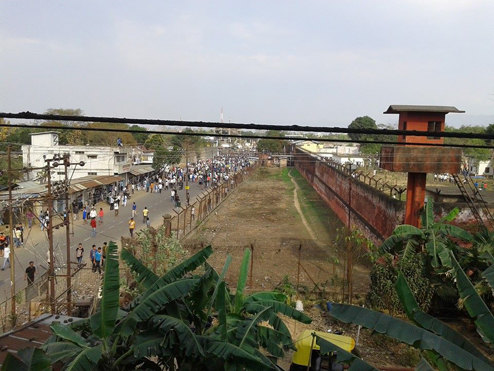 Protesters at the entrance of the Central Jail in Dimapur on Thursday. Telegraph picture

Dimapur, March 5: Hundreds of protesters today broke into a jail, dragged out a businessman accused of raping a college girl and beat him to death at the base of a clock tower in Nagaland.

One protester was killed and another injured when police opened fire near the clock tower, in Dimapur.

The rape accused, Syed Farid Khan, a 35-year-old Dimapur-based businessman, was dragged out of the jail at 4pm and taken to the clock tower, 7km from the prison, by the protesters who had gathered for a rally.

The rally was organised by the Naga Students' Federation (NSF) and Western Sumi Hoho at the clock tower around 9.30am demanding that the accused be punished.

The Nagaland cabinet met tonight to condemn the violence and form a committee to probe the lynching.

Members of Naga People's Front, Survival Nagaland and Sumi Hoho, among others, demanded that 'outsiders' be driven out from the state for alleged criminal activities, including rape. The rape accused hails from another state and deals in pre-owned cars here.

The police said the victim and the accused were neighbours and knew each other. Khan, along with the victim, allegedly checked into a hotel here on February 23.

The girl was allegedly raped several times at different locations in Dimapur on February 23 and 24. She filed a police complaintat East Dimapur police station on February 24 and Khan was arrested the same day.

Police said a person known to both the victim and Khan had allegedly helped lure the girl to the hotel. He was also arrested on February 24 and is now in judicial custody.

The police are analysing the CCTV footage in the hotel.

Yesterday, other protesters, including students from the college where the victim studies, damaged several shops owned by migrants despite heavy security. Some shops at New Market were set on fire late last evening. Shops at Hazi Park and Hong Kong Market areas were also damaged.

The district administration clamped Section 144 in the evening to control the situation. It was relaxed this morning when another rally was organised, after which the protesters headed for the central jail at 4th Mile, overpowered the security guards at the main entrance and broke open the gates in an attempt to find Khan.

The police fired blank rounds and tear gas shells and lathicharged the protesters, but could not control the crowd. Later, the jail authorities allowed the protesters to inspect the cells to identify the accused who had been shifted there from the East Dimapur police station sub-jail.

The jail houses over 500 inmates. Sources said at least three prisoners lodged there under the National Security Act fled in the melee.

This is the second time an alleged rapist has been beaten to death in Nagaland. Last year, an accused was lynched at Meluri town in Phek district, around 280km from here, for allegedly raping a girl and subsequently strangulating her to death.

Since yesterday, shops and business establishments have downed shutters. The Dimapur Chamber of Commerce and Industries convened a meeting to deliberate on the current situation.

Hokivi Sumi, the president of the organisation, said shopowners were directed to down shutters to prevent any untoward incident.

All schools remained closed today while attendance in offices was thin.