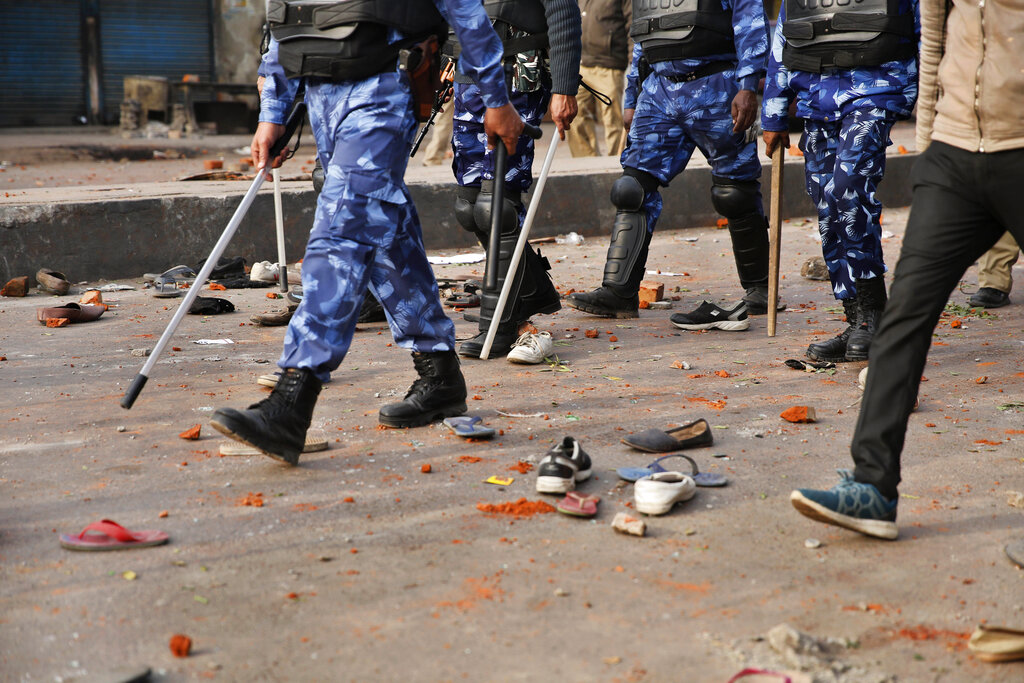 A young man died of injuries suffered during protests against the Citizenship (Amendment) Act in Lucknow on Thursday, his friends alleging a bullet hit while the police denied firing and the hospital refused specifics.

Mohammad Vakil, 25, was wounded on his right side as the protests turned violent at Parivartan Chowk in the afternoon. Demonstrators resorted to stoning and arson in several parts of Uttar Pradesh on Thursday but alleged that in every instance, the police had provoked the violence by attacking peaceful demonstrators.

Vakil died at the King George Medical University in the evening.

“A doctor stretched his wound with steel instruments and removed a bullet with a pair of forceps in front of me in the emergency room,” a fellow protester, who said he was a friend of Vakil but declined to be identified, told The Telegraph.

“He was then taken to the ICU. Three hours later, we were told he was dead.”

Hospital authorities said four men had been brought injured and one had died, but would not reveal the nature of their injuries or the cause of Vakil’s death.

A hospital source said unofficially that the other three — whom he identified as Wasim Khan, Mohammad Gilani and Ranjit Singh — had “serious injuries”.

State director-general of police Om Prakash Singh said: “The police didn’t fire on the protesters. We are probing the reason behind Vakil’s death.”

Thousands protested and hundreds were detained across the state despite the police making precautionary detentions through the previous night and confining senior political leaders, including former chief minister Akhilesh Yadav, to their homes in the morning, Samajwadi Party sources said.

Violence was reported from Lucknow, Sambhal and Varanasi, where the protests slipped out of the control of the political parties, mainly the Samajwadis and the Congress, in the afternoon.

A leaderless mob of mostly young men erupted near Parivartan Chowk in Lucknow after the police caned a peaceful march to prevent it moving towards the upscale Hazratganj Market.

“We are from various social organisations. We had planned to defy Section 144 to tell the government the protest was not confined to campuses or the Vidhan Sabha,” a young man at Parivartan Chowk, who identified himself as Anand Kulkarni, said.

“We were peaceful. The police and the RAF (Rapid Action Force) could have put up a barricade to stop us but preferred to use batons and tear gas. The law-enforcers turned violent and damaged cars and motorcycles to blame us.”

Kulkarni, who said he was a member of a human rights group, alleged that at least 12 protesters were dragged into a police van and whisked away.

Policemen were spotted preventing people from recording the incident on their mobile phones.

Parivartan Chowk looked like a battle scene for about four hours, with the police and the RAF pushing the protesters back in one street only to see many more emerging from another, hurling stones in the face of tear gas.

The protests left around 4pm after partially burning two police outposts and torching a bus, three four-wheelers and eight motorcycles.

Lucknow senior superintendent of police Kalanidhi Naithani said that at least six police officers had suffered injuries. “A few people have been detained,” he said, adding that the police were searching for more “rioters”.

DGP Singh, who was near the Hazratganj Crossing when violence erupted and was escorted out safely, said: “We appeal to parents not to allow their children to go out.”

A state home department official said that all Metro stations in Lucknow had been closed for the day. “Around 2pm, we also asked all government offices in Lucknow to close,” he said.

The official said that 200 people and 20 policemen had been injured across the state and 600 people taken into custody.

Protesters chanting “Modi murdabad” had been marching towards a ground for a rally when the police baton-charged them, provoking retaliation with stones.

“We are not being violent; it’s the police who are. They are doing it to frustrate us and blame us for everything,” a protester told reporters in Sambhal.

Chief minister Yogi Adityanath said: “We will deal with the rioters of Lucknow and Sambhal. They have burnt government property, and we will recover the cost from them.”

A group of young men organised a protest in Allahabad’s Civil Lines area but were soon outnumbered by Samajwadi members, eyewitnesses said. The police caned them and fired tear gas but the mob stayed put for three hours. Minor scuffles were reported from Dadari and Jarcha in Gautam Buddh Nagar.

“Although most of our leaders, including party president Akhilesh Yadav, were not allowed to come out of their houses in the morning, our members held marches and sit-ins at all district headquarters,” Samajwadi spokesperson Rajendra Chaudhary said.

S.P. Yadav, a former Samajwadi minister, told reporters in Balrampur that he had been under house arrest since Wednesday night but his followers had protested in the town for about six hours.

Samajwadi and Congress MLAs demonstrated in front of the Assembly building for about 40 minutes before the police pushed them inside the Vidhan Sabha.

“The idea was to openly defy the prohibitory orders. The BJP government thought the protests were confirmed to a few universities, but we have shown them that it’s a nationwide protest,” Samajwadi leader Ram Govind Chaudhary said.

State Congress president Ajay Kumar Lallu said: “The entire country is burning and the central and Uttar Pradesh governments are daydreaming that they can control the fire by force.”