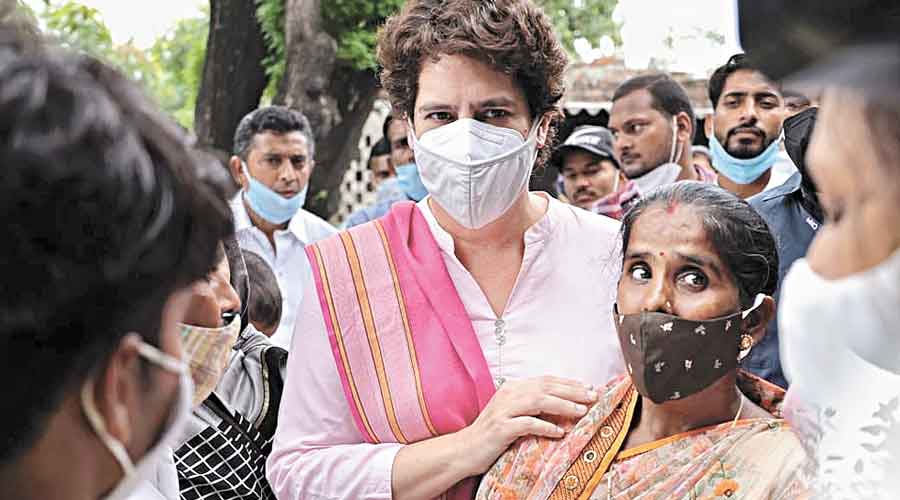 Congress leader Priyanka Gandhi Vadra on Saturday met two block development council members who were assaulted during the recent panchayat pramukh elections in Uttar Pradesh and one of whose sari was pulled allegedly by two BJP leaders, and demanded fresh polls in areas that reported violence.

Priyanka, the Congress general secretary in charge of Uttar Pradesh, extended her support to the two BDC members — a Samajwadi Party-backed Independent candidate who was prevented from contesting the panchayat pramukh election and her proposer who was seen in a viral video while her sari was being pulled.

Visiting Pasgawan in Lakhimpur Kheri district, Priyanka told reporters: “The block pramukh candidate and her proposer were assaulted. The candidate was prevented from filing her nomination. They shouldn’t fear anything. It may be that she was stopped from filing her nomination but a time will come when she will contest and win. I am with her. The women of India are with her.”

The Congress leader later said in a tweet in Hindi: “The goons of the BJP involved in the cheerharan (removal of clothes) of democracy should hear that women will become pradhans, block pramukhs, MLAs, MPs and Prime Minister, and defeat the government that gives patronage to those committing atrocities against women.

“To ensure justice to all victims of the panchayat poll violence — all my sisters and citizens — I will write a letter to the state election commission.”

The BJP has been accused of indulging in widespread violence during the panchayat pramukh elections, which chief minister Yogi Adityanath declared his party had won handsomely even before the state poll panel had announced the results. BDC members backed by the Samajwadi Party had earlier won more seats than BJP-supported members. The BDC members elect the panchayat pramukhs.

Priyanka spoke to the two women BDC members under the shade of a peepal tree and alleged that BJP leaders had insulted them at the behest of the state government. “I demand that the state election commission hold fresh elections here and all other places where violence has taken place,” she said.

The proposer, whose sari was pulled in the presence of police on July 9, later said: “Priyanka has said she will help us in future elections.”

Two BJP leaders —Yash Verma, district president of the party, and his aide Brij Singh — have been arrested over the incident.

Rekha Verma, the BJP MP of Dhaurahra who was present at the spot when the proposer was insulted, had told the media on July 10 that those seen in the video were with her. However, she had claimed that the police had lathicharged her supporters.

The panchayat pramukh candidate had alleged that she too had been assaulted inside the returning officer’s room. She had accused Verma, the police and the local administration of supporting the assaulters. The candidate had to run away without filing her nomination. Urmila Katiyar, the BJP-backed candidate and Verma’s mother, won the election.

The Opposition has alleged that the BJP had resorted to similar violence to win over 330 seats unopposed. The BJP emerged victorious in 635 of the 825 panchayat pramukh seats in Uttar Pradesh.

On Friday, Priyanka had staged a silent protest for three hours near a statue of Mahatma Gandhi in the Hazratganj area of Lucknow. She had later told reporters at the Congress office in the state capital that she had come to protest against “the Uttar Pradesh government, which is killing democracy and the Constitution while the Prime Minister endorses such activities”.

“The administration and the police spread anarchy; the state government was directly involved in intimidating and kidnapping panchayat election candidates. They attacked women candidates during the elections,” the Congress leader had said. “And the Prime Minister congratulated them for their victory and said there was vikaswad (politics of development) in the state…. Whatever happened here was patronised by the Prime Minister.”

“The government thinks we will watch such things silently but it is not going to happen. I am here to say that I will keep speaking against a government that spreads violence,” Priyanka had added.

She is in Uttar Pradesh on a three-day tour and meeting prospective candidates for the 2022 Assembly elections and party workers from across the state.

Swatantra Dev Singh, the Uttar Pradesh BJP president, said: “Priyanka is on a picnic in UP. The last time she had come was one-and-a-half years ago. I don’t need to say anything about her as the people of the state know her.”

Priyanka had, however, addressed a farmers’ rally in Saharanpur and met Nishad community members in February this year, promising them that the Congress would fight for their rights.

UP: FIR against Congress chief