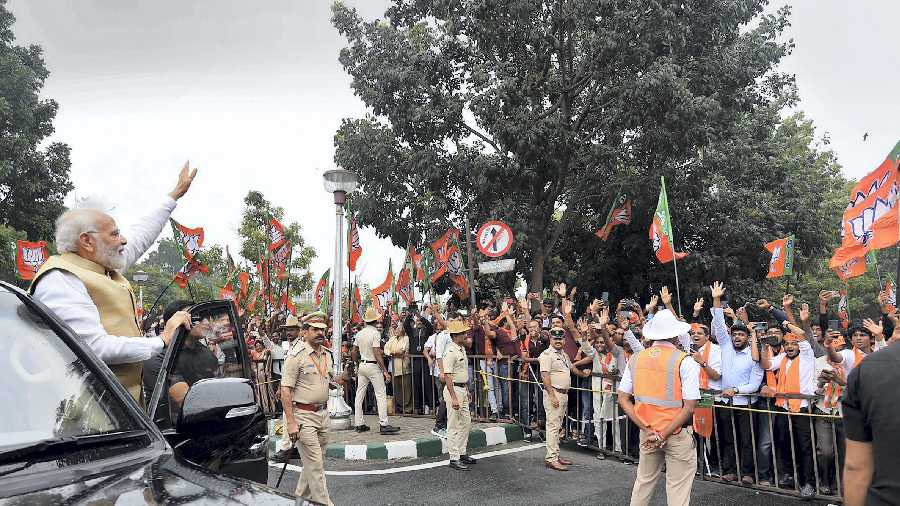 Prime Minister Narendra Modi on Friday stopped his car and waved at enthusiastic groups of party workers and supporters near the office of Karnataka Public Service Commission close to 'Vidhana Soudha' and at a key traffic junction in Bangalore.

He was on his way to the Krantiveera Sangolli Rayanna (KSR) station here to flag off 'Vande Bharat' Express and 'Bharat Gaurav Kashi Darshan' trains.

Standing on the 'running board' of his car, Modi greeted the crowd, many of whom were seen chanting 'Modi, Modi' slogans and holding aloft the BJP flags.

Later, as he proceeded to inaugurate the Terminal-2 of Kempegowda International Airport (KIA), Modi got out of the vehicle at a major traffic junction near the KSR railway station, walked towards the crowd who gathered in full strength on all sides and waved at them.

The Prime Minister is on a visit to Bangalore to flag off the trains, inaugurate the terminal-2 of KIA and unveil the 108-feet tall statue of 'Nadaprabhu' Kempegowda, a chieftain of the mighty Vijayanagara empire who founded Bengaluru about 600 years ago.

Modi's Bangalore visit assumes significance as the Assembly elections in Karnataka are less than six months away.

#KarnatakaWelcomesModiJi#Vanakkam_Modi
This is how karnataka welcomes @narendramodi Ji. #NaMo stopped his car & got down to wave . pic.twitter.com/DEWrwZ9d0o