Advertisement
Home / India / Prez poll: Next Opp meeting likely to be convened on Jun 20-21 in Mumbai by Sharad Pawar
June 20-21 is tentative schedule

Prez poll: Next Opp meeting likely to be convened on Jun 20-21 in Mumbai by Sharad Pawar

At the next meeting, the parties are expected to come up with names of leaders who could be widely acceptable 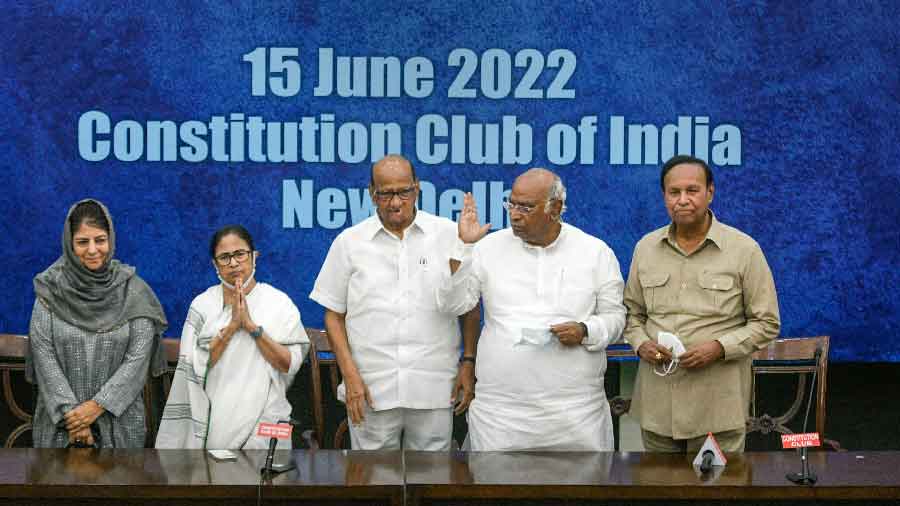 Opposition leaders at a press conference after the meeting on Presidential poll in New Delhi on Friday
PTI Picture
Our Bureau And PTI   |   New Delhi   |   Published 15.06.22, 08:15 PM

The next meeting of major Opposition parties to deliberate on a consensus candidate for the Presidential election is likely to be held on June 20-21 and will be convened by NCP chief Sharad Pawar in Mumbai, senior leaders said Wednesday.

After the first meeting called by West Bengal Chief Minister Mamata Banerjee in Delhi and attended by 17 parties, the leaders said that it has been decided that a common candidate who will "uphold the democratic ethos of the country" will be chosen as the opposition nominee.

At the next meeting, the parties are expected to come up with names of leaders who could be widely acceptable, they said.

While Mamata mentioned the names of National Conference chief Farooq Abdullah and Gopalkrishna Gandhi as other alternatives, senior opposition leaders said that the remark was made in "passing" and "not seriously".

Former West Bengal governor Gopalkrishna Gandhi was the consensus opposition candidate for the post of Vice President of India in 2017 but had lost to M Venkaiah Naidu in the election.

He is the grandson of Mahatma Gandhi and C Rajagopalachari.

Leaders of several Opposition parties at the Wednesday meeting urged NCP supremo Sharad Pawar to be the joint Opposition candidate for the presidential election, but the veteran leader declined the offer.

Leaders of the Congress, Samajwadi Party, NCP, DMK, RJD and the Left parties attended the over two-hour-long meeting called by the Trinamool Congress supremo, while the AAP, SAD, AIMIM, Telangana Rashtra Samithi (TRS) and Odisha's ruling BJD skipped it.

The nomination process for the July 18 presidential election began on Wednesday.