Advertisement
Home / India / Droupadi Murmu, India's 15th President, takes oath
'I will focus on the welfare of the marginalised' 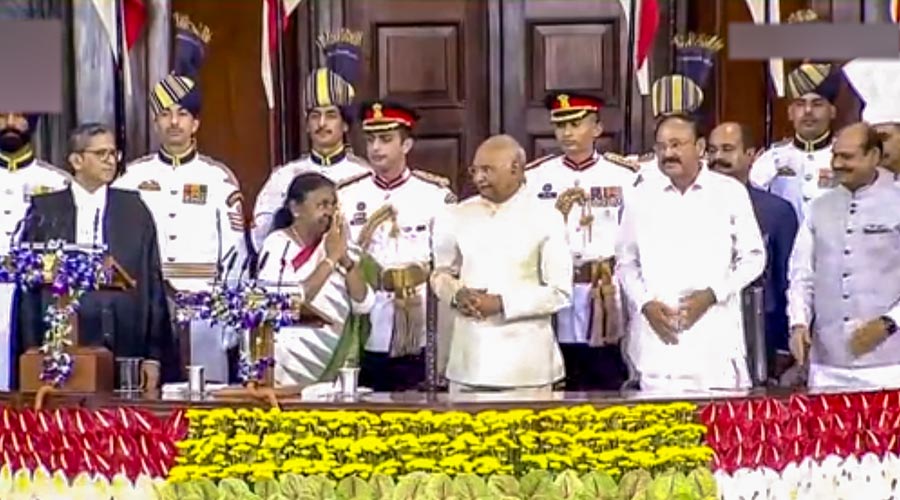 Droupadi Murmu took oath as the 15th President of India on Monday and promised to uphold the Constitution of India while expressing her full support to the youth of the country in fulfilling their aspirations.

Chief Justice of India N V Ramana administered the oath of office to her at a ceremony held at Parliament's Central Hall in the presence of former president Ram Nath Kovind, Vice President and Rajya Sabha Chairman M Venkaiah Naidu and Prime Minister Narendra Modi amongst others.

She took the oath in the name of god in Hindi.

Addressing the joint sitting of Parliament after taking the oath, President Murmu said, "My election is proof that the poor in the country can have dreams and also fulfil them."

She said getting a primary education was a dream for her and added that she would focus on welfare of the marginalised. Addressing the country's youth, she appealed to them to lay the foundation of the country's future besides building their own. "As president, you have my full support," she added.

Earlier in the day, she visited Rajghat and paid her respects to Mahatma Gandhi. She then met outgoing President Ram Nath Kovind.