3 pieces of evidence were displayed: the electronic signature of the aircraft that India had picked up, the debris of AMRAAM and photographs of debris from Pakistan 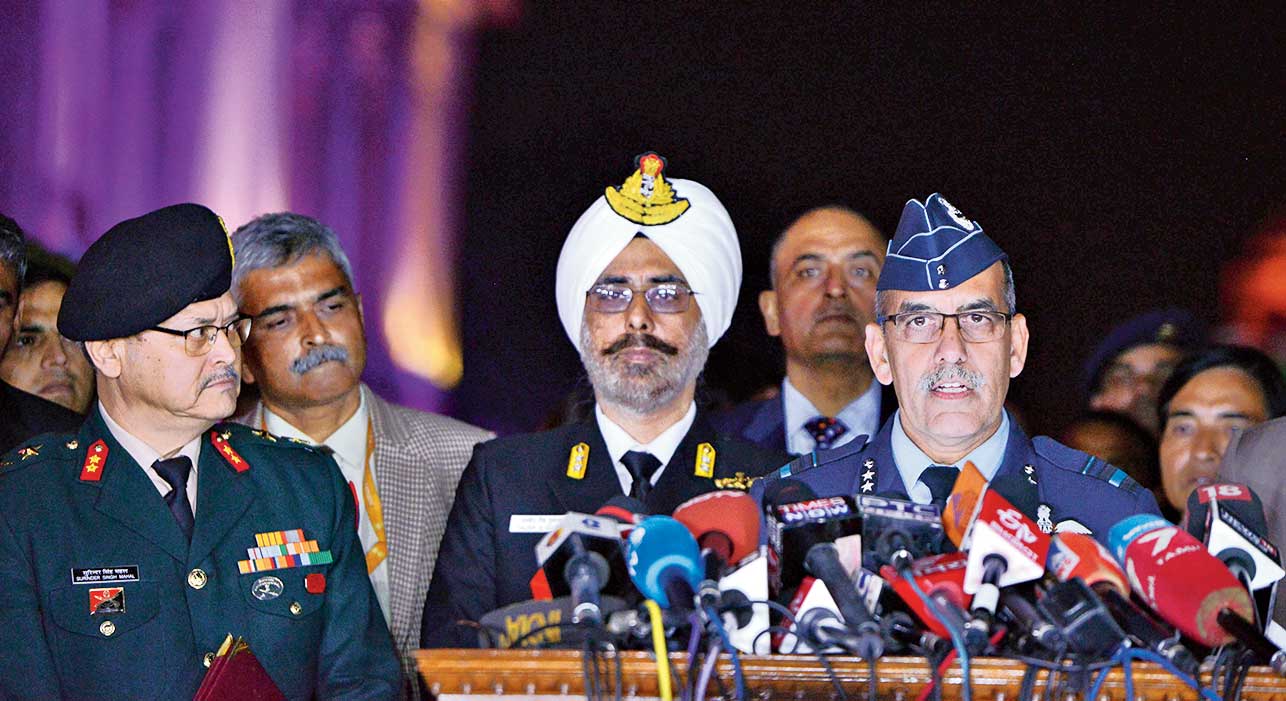 None other than the Indian defence establishment on Wednesday brought under strain the claim of “sources” in India who had put the number of terrorists killed in Balakot at a precise “325” and “25” of their commanders.

At a rare joint media conference of some of the top brass of the three wings of the military on the South Block lawns on Thursday, one question was about the damage inflicted by the Indian air strikes at Balakot in Pakistan on Tuesday.

Reporter: “Please tell us regarding the damage of the terrorist camps hit by the Indian Air Force.

Air Vice-Marshal R.G.K. Kapoor: “There is fairly credible evidence with us which proves that there was damage to the camps. We hit the intended targets and caused the damage that was intended. However, it will be premature to say what is the number of casualties we have been able to inflict on those camps and the number of deaths. Whatever we intended to destroy we have got the result.”

Reporter: “How will you establish the casualties in the Balakot terrorist camps which were destroyed in the IAF operation?”

Air Vice-Marshal Kapoor: “We have evidence. Whatever we wanted to destroy we have got that effect. Now it is up to the government and higher leadership as to when and how to give the evidence or not.”

On Tuesday, Indian foreign secretary Vijay Gokhale had said “a very large number of Jaish-e-Mohammed terrorists, trainers, senior commanders, and groups of jihadis who were being trained for fidayeen action were eliminated”.

Soon after, the “sources” went into action. Unnamed “sources” are usually senior government officials who brief reporters individually or in groups on the condition that they cannot be named.

On Tuesday, some sources said around 300 terrorists were killed. When some reporters wondered about the round figure, a break-up was offered: 325 plus 25. Since then, the figures and colourful details of the terrorist camp have grown.

On Thursday night, soon after the military media conference, the news agency Reuters, whose reporters went to the bombed site at Jaba in Pakistan and iterated earlier reports that no body had been found, reported that western diplomats in Islamabad said they did not believe the Indian Air Force hit a militant camp.

“There was no militant training camp there. It hasn’t been there for a few years — they moved it. It’s common knowledge amongst our intelligence,” Reuters quoted a diplomat as saying.

The confusion can be cleared if the Indian political leadership takes a cue from the air vice-marshal and releases the evidence.

The military did release evidence on Thursday but that related to the tit-for-tat air strike by Pakistan on Wednesday.

The officers presented evidence, including the debris of an AMRAAM air-to-air missile fired by Pakistani F-16 jets at military installations in Jammu and Kashmir’s Rajouri, to debunk Islamabad’s claim that it had not used F-16s in its aerial strike.

Three pieces of evidence were displayed: the electronic signature of the aircraft that India had picked up, the debris of AMRAAM and photographs of debris from Pakistan.

“The only aircraft Pakistan has to transport such a missile is the F-16,” Air Vice-Marshal Kapoor said, adding that Pakistan claimed that it intentionally dropped munitions in open space where there was no human presence or military posts. “The fact is that the PAF aircraft targeted military installations.”

The evidence is crucial to establishing the use of the F-16 jets in the offensive since the US, which sold the jets to Islamabad, does not allow its use against India. The F-16s are meant to be used only to combat terrorism. The wreckage of the missile was displayed as proof of “Pakistani aggression”.

Air Vice-Marshal Kapoor said a fleet of fighter jets of the PAF tried to cross the Line of Control on Wednesday and target the Indian military establishments but was effectively intercepted by the IAF’s fighter planes. He said although the PAF jets dropped bombs, they were not able to cause any damage.

The three senior officers sent a sharp message to Pakistan, saying the forces remained in a high state of readiness to respond to any provocation. “If they provoke us any further, we are prepared for exigencies,” said Maj. Gen. Mahal.

“Pakistan’s fighter jets violated Indian airspace and targeted military installations but the attempts were foiled by swift response from our side, so escalation was done by them. The Indian armed forces are prepared for any contingencies. We continue to maintain strict vigil along the Line of Control and the International Border,” Mahal told reporters.

“Mechanised formations too have been placed on standby. I wish to assure the nation that we are fully prepared and in a heightened state of readiness to respond to any provocation by Pakistan,” he said.

“Despite the present turn of events, the Indian Army is committed to maintain peace and stability in the regions and will continue to act against agencies who harbour inimical designs against India and citizens of our country.”

Air Vice-Marshal Kapoor said the Pakistani establishment had made “factually incorrect” statements on the February 27 incidents, which include initial claims that two IAF aircraft had been shot down and three Indian pilots were in Pakistan. It was later revised to one IAF aircraft and one pilot.

He said “India is happy and looks forward” to the return of Abhinandan Varthaman from Pakistan on Friday.

Asked whether India looked at the pilot’s return as a goodwill gesture, the Air Vice-Marshal said: “We are happy that our pilot, who had fallen across the Line of Control and was in custody of Pakistan, is being released. We are extremely happy to have him back. We only see it as a gesture which is in consonance with the Geneva Conventions.”