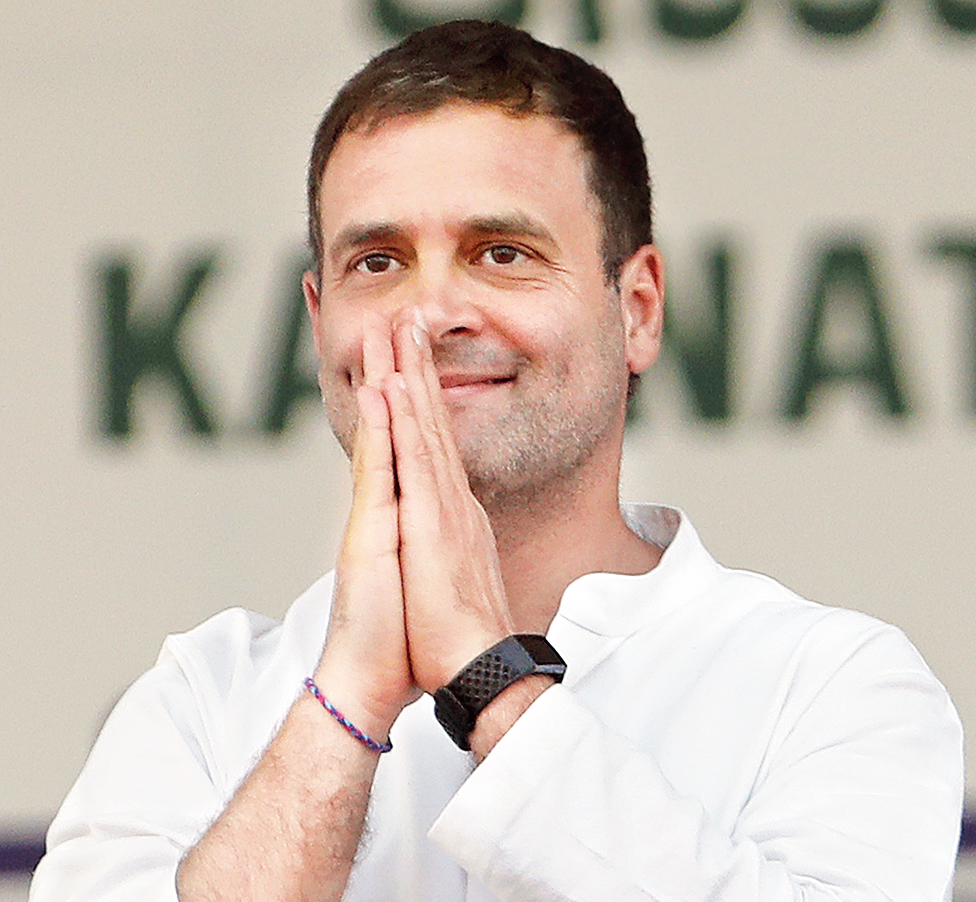 Rahul Gandhi will contest from the Wayanad Lok Sabha seat in Kerala in addition to Amethi as part of a strategy to boost the Opposition’s potential in the south and stymie the BJP’s expansion plans.

Senior Congress leader A.K. Antony announced the decision on Sunday morning, saying Wayanad was selected because it borders the states of Tamil Nadu and Karnataka, which too had invited Rahul to contest from their soil.

Antony said Rahul’s presence in Wayanad would honour the sentiments of the people of these three states.

Congress communications chief Randeep Surjewala projected the decision as a gesture of solidarity with the south at a time when, he seemed to be suggesting, the region’s culture was under threat from “divisive forces”.

“This is a befitting reply to the divisive forces trying to divide people on the grounds of colour, language and food habits. This is to reassure the southern states that they are deeply valued and that the fraternal relations will be further strengthened,” he told a news conference, attended by senior leaders Antony, Ahmed Patel and Mukul Wasnik.

“Rahulji is showing the people of the south that he will stand up for them if there is any attack on their culture.”

The Sangh parivar’s promotion of Hindi and vegetarianism has indeed created misgivings in the southern states although the BJP has tried to avoid the topics of “cow protection” or beef-eating in the south and the Northeast.

Rahul’s choice of Wayanad will “strengthen the bonding between north and south” and “espouse the aspirations of the south”, Surjewala said.

Kerala’s CPM-led ruling alliance questioned whether Rahul wanted to fight the Left or the BJP, which has hardly any presence in Wayanad, and suggested the Congress president was unsure about winning from Amethi.

The BJP claimed more stridently that Rahul’s decision was forced by the fear of impending defeat in Amethi, a suggestion that Surjewala dismissed as “childish”.

Congress sources said the move was driven by the need to stop the BJP from expanding its base in the south, and the Left should look at the broad picture instead of seeing Rahul’s entry into Kerala as a hostile gesture.

Rahul’s move comes at a time when the BJP is working diligently to improve its seat tally in the south and in eastern states like Odisha and Bengal, aware that it has already peaked in the north and the west, where its numbers can only go down.

Karnataka, Tamil Nadu, Andhra Pradesh, Telangana, Kerala and Puducherry together account for 130 Lok Sabha seats, and the Congress’s strategists believe that the BJP can be restricted to a single-digit tally from the region with a last-minute push.

Except for Karnataka, the BJP lacks any significant presence in the other southern states although it has succeeded in making issues such as the Sabarimala controversy a talking point in Kerala.

In Tamil Nadu, it has struck an alliance with the AIADMK while it depends on “hidden allies” like the YSR Congress and the Telangana Rashtra Samiti in Andhra Pradesh and Telangana.

“Rahul’s presence in Wayanad will significantly bolster our chances,” a member of the Congress core committee told The Telegraph.

“We won only 44 Lok Sabha seats across the entire country in 2014 but expect to cross that number from the south alone this time. With our allies, we can corner around 90 seats in the south.

“That will knock the BJP out from the region, making it almost impossible for (Prime Minister) Narendra Modi to offset the huge losses expected in Uttar Pradesh, Bihar, Madhya Pradesh, Rajasthan, Chhattisgarh and Jharkhand.”

He added: “In these states, the BJP and allies won roughly 180 of the 200 seats (in 2014). They cannot repeat that. We will wrest a good number of seats from Modi in Maharashtra and Gujarat too. With the south offering very little, Modi can be pulled down easily. That’s the reason for our emphasis on the south. This has nothing to do with Amethi.”

Asked whether Rahul was contesting from Wayanad for fear of losing Amethi, Surjewala said: “Did Modi contest from Varanasi because he was scared of losing Vadodara? It’s becoming difficult to answer childish questions.”

Senior leaders contesting two seats is not new. Indira Gandhi had contested from Rae Bareli and Medak (now in Telangana) in 1980, and Sonia Gandhi from Amethi and Bellary (Karnataka) in 1999.

Mulayam Singh Yadav, Lalu Prasad and Akhilesh Yadav too have contested simultaneously from two seats in the past, an option allowed under Section 33 of the Representation of the People Act.