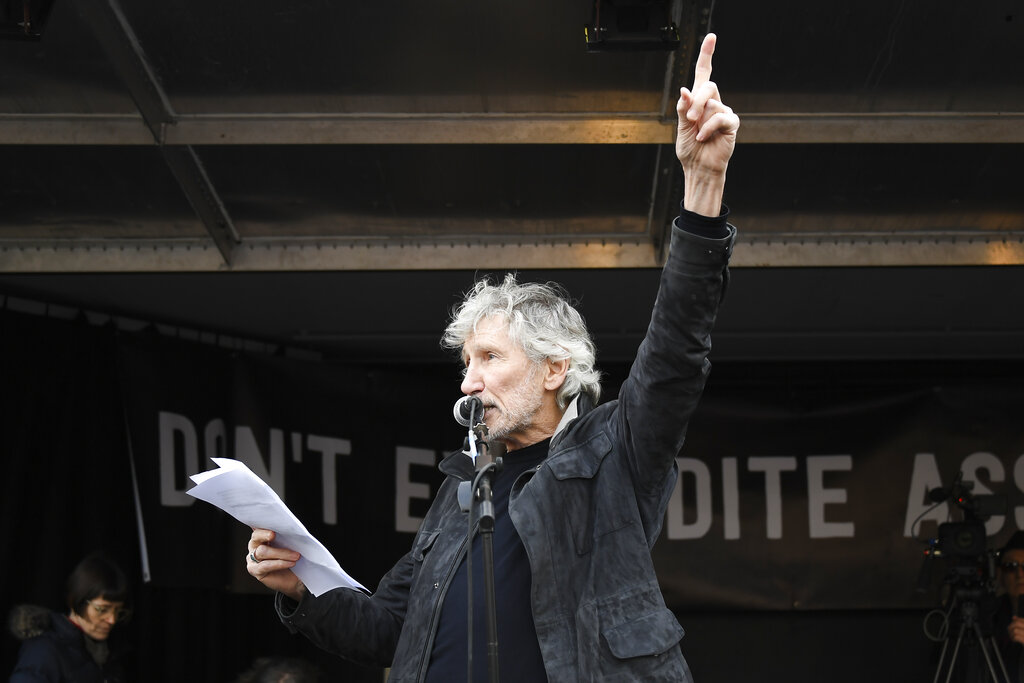 British musician Roger Waters gestures as he speaks at a rally in Parliament Square as part of the demonstration against the extradition to the US of Wikileaks founder Julian Assange in London, Saturday, February 22, 2020.
AP
PTI   |   London   |   Published 27.02.20, 10:36 AM

'Everything will be remembered, Everything recorded', Pink Floyd co-founder and legendary musician Roger Waters said recently as he read out Delhi student Aamir Aziz's poem at a protest in London and described the Citizenship (Amendment) Act as 'fascist' and 'racist'.

The 76-year-old singer-lyricist was participating in a protest last week to demand the release of Wikileaks founder Julian Assange, who has been in jail in the UK since April 2019.

A video from the protest showing Waters reciting the English version of Aziz's popular poem Sab Yaad Rakha Jayega has been circulating widely on Twitter and other social media platforms.

'This is a young man none of us know, his name is Aamir Aziz. He is a young poet and activist in Delhi. He is involved in the fight against Modi and his fascist, racist citizenship law. I will read a little bit from one of his poems,' the musician said, endorsing the anti-CAA protests and criticising the Indian Prime Minister.

He also said 'this kid' has got a future.

Waters received a resounding thumb's up from Indian Twitter users, including celebrities such as composer Vishal Dadlani and actor Richa Chadha.

"Everything will be remembered." https://t.co/ZjDoAWLhCr

Chadha posted, 'So how many foreign-nationals have been declared anti-national yet? @iamjohnoliver @rogerwaters @chrislhayes @BernieSanders'

According to the CAA, members of the Hindu, Sikh, Buddhist, Jain, Parsi and Christian communities who have come from Pakistan, Bangladesh and Afghanistan till December 31, 2014 following religious persecution there will get Indian citizenship. It leaves out Muslims.

In recent days, at least 34 people have been killed in communal violence triggered by clashes between pro and anti-CAA groups in northeast Delhi.

Aziz, a writer, actor and musician with a degree in civil engineering, first gained prominence with his protest song Achhe Din Blues. He posted Sab Yaad Rakha Jayega on YouTube in January and it has so far got 184,000 views.