PhD must for college teachers' promotion 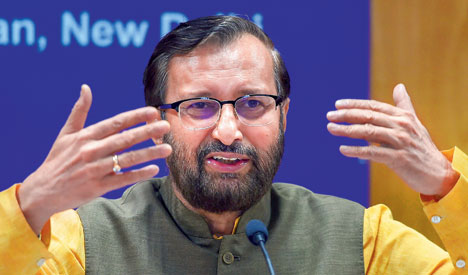 New Delhi: College teachers will no longer be bound to pursue research but must have a doctorate for promotion to the next grade within the rank of assistant professor, the government announced on Wednesday ahead of changes in rules to be notified soon.

It means that while research becomes optional for college teachers, a PhD is a must for career advancement.

Till now, college teachers who didn't have doctorate degrees could be promoted to associate professor based on their academic and research performance and interviews.

Human resource development minister Prakash Javadekar said he had approved the proposed regulations on minimum qualifications for appointment of teachers in universities and colleges and measures for maintenance of standards in higher education.

"Making research mandatory was a point of irritation... everybody cannot be a researcher," Javadekar told a media conference.

Javadekar, however, clarified that research would continue to be mandatory for those who teach in universities.

The new regulations, prepared by the University Grants Commission, would supersede the earlier rules that made it mandatory for university and college teachers to pursue research.

According to the new norms, which may be notified this month, universities will be asked to recruit only PhD degree holders as assistant professors from the 2021 session.

The mandatory requirement of a PhD degree for hiring assistant professors in universities will make the NET and the SLET irrelevant for such posts.

But the NET will come into the picture when selecting candidates for fellowship programmes, such as the Junior Research Fellowship.

The new regulations will replace the Academic Performance Indicators (API) for promotion with a teacher evaluation grading system. Under this system, every teacher will be evaluated on teaching, extension and mentoring activities and their performance categorised as "satisfactory", "good" and "very good".

Several teachers said the proposed rules amounted to a "retrograde" move. "Making research optional is a retrograde step. This will create separate cadres of college teachers and university teachers. It cannot be supported," said Rajiv Ray, president of the Delhi University Teachers Association (Duta) and the Federation of Central University Teacher Associations (FedCUTA).

Ray said that while Duta and FedCUTA welcomed the move to replace the API, there were not enough PhD degree holders from socially deprived sections like the Scheduled Castes, Scheduled Tribes and Other Backward Classes. "This decision will affect the interest of the deprived sections," he said.

"At one level the government wants PhD for promotion in colleges. Then it says research is optional. In DU, the majority of the research comes from colleges. Making research optional is a very bad move."

Jha said this might, after a few years, lead to a lower scale for college teachers compared with university teachers.

Former Duta president Aditya Narayan Mishra said many college teachers would remain stuck at level 1 in the assistant professor rank for not having a doctorate degree.

"The requirement of PhD for promotion is arbitrary. There are so many very good teachers who don't have a PhD," Mishra said.

The proposed policy has not changed the required weekly 16 hours of teaching for assistant professors and 14 hours for associate professors and professors. But those pursuing research and involved in extension activities like community-related work will get up to two hours of relaxation from the required teaching hours.

PhD holders from the top 500 global universities need not seek equivalence from the Association of Indian Universities (AIU) while applying for teaching jobs. The new policy also provides for creation of professor posts in colleges. So far, colleges only allowed promotion up to the level of associate professor.

Central universities will have to follow the proposed UGC norms. State universities have to first discuss these regulations at their academic forums but are not bound to adopt them.