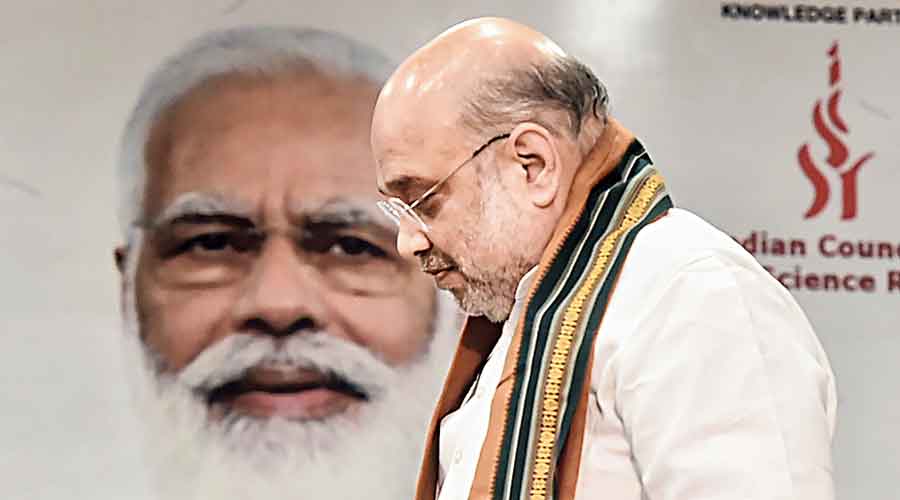 Against the backdrop of a picture of the Prime Minister, Union home minister Amit Shah at a review of two decades of Modi in government on Wednesday in New Delhi.
PTI
R. Balaji   |   New Delhi   |   Published 28.10.21, 02:07 AM

The State would not get a free pass every time the spectre of national security is raised, the Supreme Court declared on Wednesday and constituted a committee headed by a former judge to look into all the questions swirling around the Pegasus spyware controversy that the Narendra Modi government has been stonewalling.

Former Supreme Court judge Justice R.V. Raveendran will head the six-member committee that includes technical experts. The panel has been preliminarily given two months to submit its report to the court.

The terms of reference cover questions such as whether the Centre or any state government had acquired the Israeli spyware that can be bought only by State-run agencies.

The committee has also been asked to collect details of any victims affected by the spyware attack.

In July, information revealed by a media collective that included The Wire news portal and The Guardian newspaper suggested that the list of potential Indian targets covered citizens in every sphere that is expected to act as a check and balance in a democracy. Judges, politicians, journalists, social activists and industrialists were on the potential list.

Citing national security, the Modi government had so far not even acknowledged whether it had indeed access to Pegasus or not.

On Wednesday, a bench of Chief Justice N.V. Ramana and Justices Surya Kant and Hima Kohli rejected the Centre’s sustained argument that the government can neither admit nor deny the snooping charges in national interest.

The court pointed out that “national security cannot be the bugbear that the judiciary shies away from by virtue of its mere mentioning”.

The CJI said the “mere invocation of national security by the State does not render the court a mute spectator”.

“If the respondent — the Union of India — had made their stand clear, it would have been a different situation and the burden on us would have been different. Such a course of action taken by the respondent — the Union of India — especially in proceedings of the present nature which touches upon the fundamental rights of the citizens of the country cannot be accepted,” the top court said.

The bench said it was a settled position of law that in matters pertaining to national security, the scope of judicial review was limited. “However, this does not mean that the State gets a free pass every time the spectre of national security is raised,” the apex court said.

“Although this court should be circumspect in encroaching upon the domain of national security, no omnibus prohibition can be called for against judicial review,” it added.

The bench disposed of a batch of PILs filed by civil liberties activists, journalists and others seeking a court-monitored probe into the alleged illegal surveillance on electronic devices such as mobile phones and laptops with Pegasus. The petitioners had contended that Pegasus could also be used to plant incriminating materials to implicate an individual in false cases.

The court noted that in the present world of conflicts, it was an extremely uphill task to find and select experts who were free from prejudices and were independent and competent. It rejected the Centre’s offer to appoint an expert panel on its own, saying such a course would violate the settled judicial principles against bias.

The Supreme Court said it had shortlisted the committee members based on their biodata and information collected independently. The committee will have the following composition:

⚫ Prabaharan P, professor at the School of Engineering of the Amrita Vishwa Vidyapeetham at Amritapuri, Kerala.

The last four members will look into the technical aspects.

The terms of reference of the committee will be to inquire, investigate and determine whether:

⚫ The Pegasus spyware was used on phones or other devices of Indian citizens to access stored data, eavesdrop on conversations, intercept information and/or for any other purpose.

⚫ The details of the victims and/or persons affected by such a spyware attack.

⚫ What steps/actions have been taken by the government after reports were published in 2019 on the alleged hacking of WhatsApp accounts of Indian citizens using Pegasus.

⚫ Whether the Pegasus spyware was acquired by the Centre or any state government, or any central or state agency for use against Indian citizens.

⚫ If any government agency has used the Pegasus spyware on citizens, under what law, rule, guideline, protocol or lawful procedure was such a deployment made.

⚫ Whether any domestic entity/person has used the spyware on citizens, and if that was authorised.

⚫ Any other matter or aspect that may be connected, ancillary or incidental to the other terms of reference that the committee may deem fit and proper to investigate.

The committee is also expected to look into the following issues and make recommendations:

⚫ Whether a new enactment or amendment is needed to existing laws and procedures on surveillance and for improving the right to privacy, and steps that can be taken.

⚫ Whether the cyber security of the nation and its assets needs to be enhanced and improved, and how to go about it.

⚫ How to prevent unlawful invasion of the citizens’ right to privacy by State and/or non-State entities through spywares.

⚫ Whether a mechanism needs to be put in place for citizens to raise grievances about or suspicion of illegal surveillance on their devices.

⚫ If a well-equipped and independent premier agency needs to be set up to investigate cyber security vulnerabilities, threat assessment of cyberattacks and allegations of such online targeting.

⚫ Whether the Supreme Court needs to make an ad hoc arrangement as an interim measure to protect citizens’ rights till such time Parliament initiates relevant steps.

⚫ Any other ancillary matter that the committee may deem fit and proper.

The committee is authorised to:

⚫ Devise its own procedure to effectively implement and answer the terms of reference.

⚫ Hold such enquiry or investigation as it deems fit.

⚫ Record statements of any person in connection with the enquiry and call for the records of any authority or individual.

Justice Raveendran is at liberty to take the assistance of any serving or retired officer, legal expert or technical expert. He shall fix the honorarium of the committee members in consultation with them. This amount will have to be paid by the central government.

The Centre, all state governments, as well as the agencies and authorities under them have been directed by the Supreme Court to extend all facilities to the committee.

Virender Kumar Bansal, officer on special duty who is the Supreme Court registrar, will coordinate between the committee and the government.