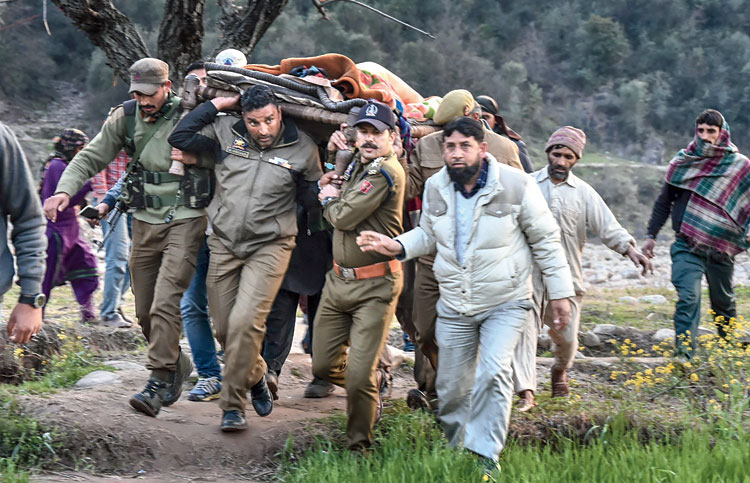 A person injured in Pakistani shelling being taken to hospital along the LoC on Thursday
PTI
Our Special Correspondent   |   Srinagar   |   Published 28.02.19, 08:56 PM

Pakistan shelling on Thursday claimed the life of a woman in the border district of Poonch in Jammu, making it the first fatal casualty in a ceasefire violation after the fresh round of hostilities began on Tuesday.

Officials said Pakistan violated ceasefire at eight places across the Line of Control in Jammu, during which Aamina Kousar, who hailed from Chajjala of Mendhar, lost her life and a jawan was injured.

An official said ceasefire violations had been continuing on the LoC for the past seven days but escalated after the Indian air strikes. He said 31 violations had taken place during the past three days.

The Pakistani fire drew heavy retaliation from the Indian side but it could not be ascertained whether there were any casualties on the other side, the official said.

A defence spokesperson said the Pakistani army continuously resorted to unprovoked ceasefire violations along the LoC in around six sectors, including Sunderbani, Mankote, Khari Karmara and Degwar sectors in Poonch and Rajouri.