As many as 22 patients seen turning blue, admits doctor in video 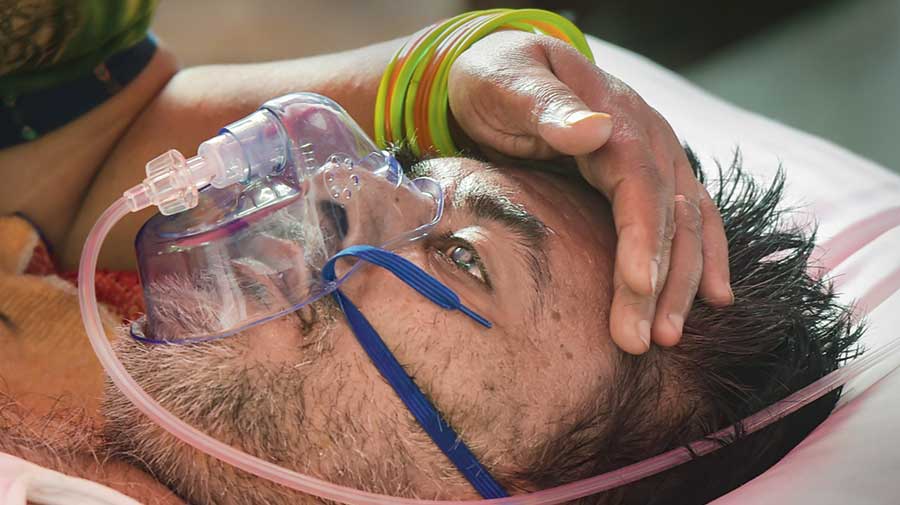 In the April 28 video, Dr Arinjay Jain allegedly claims that there was acute oxygen shortage at the hospital during the second wave of coronavirus.
Representational file picture
Our Bureau, Agencies   |   Agra   |   Published 08.06.21, 05:17 PM

The Agra administration on Tuesday ordered an enquiry after a video clip surfaced in which the owner of a private hospital here is purportedly heard saying that he conducted a "mock drill" in which oxygen supply was cut off for Covid patients for five minutes.

In the video which went viral on social media on Monday, the owner of Shri Paras Hospital is also heard saying that the bodies of some patients started turning blue after the oxygen supply was cut off.

District Magistrate Prabhu N Singh told reporters that action will be taken against the owner under the Pandemic Act. He said the hospital will be sealed and patients will be shifted to other hospitals.

In the April 28 video, Dr Arinjay Jain allegedly claims that there was acute oxygen shortage at the hospital during the second wave of coronavirus.

"Start discharging people, there is no oxygen availability anywhere, even the chief minister cannot get you oxygen. Modi Nagar is dry," he said.

"We talked with families of the patients but no one was ready to discharge their patients. So we decided to conduct a mock drill so that we could segregate the critically ill patients. After shutting off the oxygen supply for five minutes, bodies of 22 patients started turning blue," Jain said.

He said that families of the remaining 74 Covid patients were asked to arrange for oxygen cylinders.

However, the district magistrate said there wasn't a scarcity of oxygen at the hospital and that no patient died due to oxygen shortage at the hospital.

Talking about the deaths of Covid patients at the hospital, he said four patients died on April 26 while three succumbed to the infection on April 27.

"Shri Paras Hospital had enough oxygen and it is not true that 22 patients died there due to oxygen shortage. However, the video that is being circulated will be examined and the required action will be taken," the DM said.

Chief Medical Officer, Agra Dr R C Pandey told PTI that a team has been sent to the hospital to investigate the matter.

When contacted, the owner of the hospital was not available.