Over to Rahul Gandhi for chief minister selection in 3 states 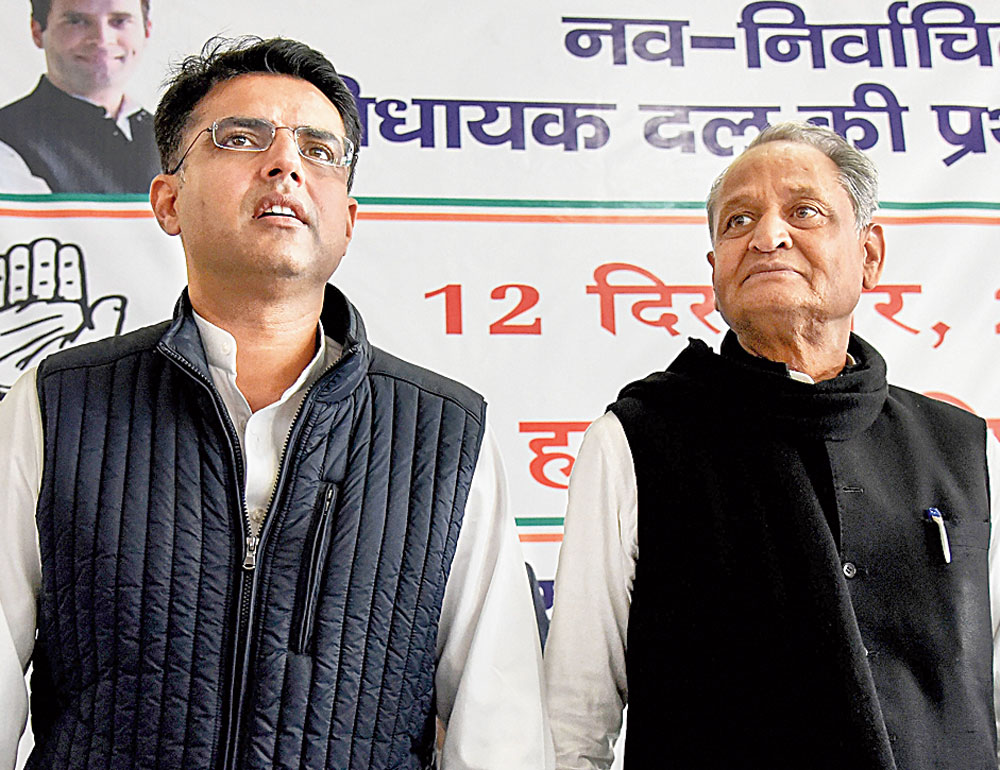 Kamal Nath appears set to become the next chief minister of Madhya Pradesh as the other contender, Jyotiraditya Scindia, might not get the backing of the majority of Congress legislators, controlled by the principal behind-the-scenes operator, Digvijaya Singh.

Ironically, in Rajasthan the young Sachin Pilot may not get the mantle although the majority of the newly elected legislators support him.

Sources said the support of MLAs and charisma would not be the decisive factor in choosing the chief ministers as the task of preparing the party for the 2019 parliamentary polls was the overriding concern.

Legislators from Madhya Pradesh and Rajasthan have authorised Rahul Gandhi to pick the head of government. In Chhattisgarh, too, the opinions of MLAs are divided and the decision has been left to the high command. Some announcements are likely on Thursday.

Unlike in Chhattisgarh where there are four contenders — Bhupesh Baghel, Tamradhwaj Sahu, Charan Das Mahant and T.S. Singh Deo — Rajasthan and Madhya Pradesh appear stuck in a generational tussle. While Scindia and Nath are the main contenders in Madhya Pradesh, Ashok Gehlot and Pilot are locked in a fierce struggle in Rajasthan.

The majority of MLAs aggressively backed Pilot’s leadership at the Congress Legislature Party meeting in Jaipur on Wednesday. The high command acknowledges Pilot’s contribution as he ceaselessly toiled in the state for four years to rebuild the party from ruins. His popularity and merit are also indisputable, but many senior leaders feel he can wait as the requirements of the hour are different.

Gehlot has much more experience and having been chief minister for two terms, is considered more adept at consensual politics and crisis management. The Congress has only 99 seats in the Assembly of 200 and MLAs from other parties and Congress rebels have to be handled with care. The dominant view in the central leadership is that Gehlot should be allowed to lead the government at least till the Lok Sabha elections.

Pilot is also considered to be a shrewd politician, mature beyond his 41 years, and Rahul would like to install him as chief minister. Pilot is expected be an integral part of the future Congress leadership and his experience in running a big state would be useful in bigger assignments.

But all this may not influence the decision-making now as Gehlot is seen as the better bet in terms of political management for the Lok Sabha elections.

In Madhya Pradesh the situation is far more complex as the charismatic Scindia is not only a victim of factionalism but also seen as unable to take everybody along.

Detractors point to his perceived arrogance and inaccessibility, arguing that the “Maharaj needs to show greater maturity before he leads the state”. But there is no doubt that voters have an emotional connect with Scindia and saw him as the probable chief minister during the campaign.

Scindia’s main problem is that Digvijaya has a clear preference for Nath and most of the MLAs are loyal to Digvijaya.

Scindia did very well in the Gwalior-Chambal region, which is in his control, winning 26 of the 34 seats, but may not have the backing of the majority of the MLAs.

Many leaders feel factionalism in the state will increase if Scindia is made chief minister and there is no need to run the risk of antagonising senior leaders before the Lok Sabha elections.

Nath, 72, is expected to play a vital role in the management of the 2019 polls. Scindia, 47, is also no greenhorn — he has been a central minister for 10 years and has earned respect in the state through hard work over the past couple of years. Still, he appears set to wait.