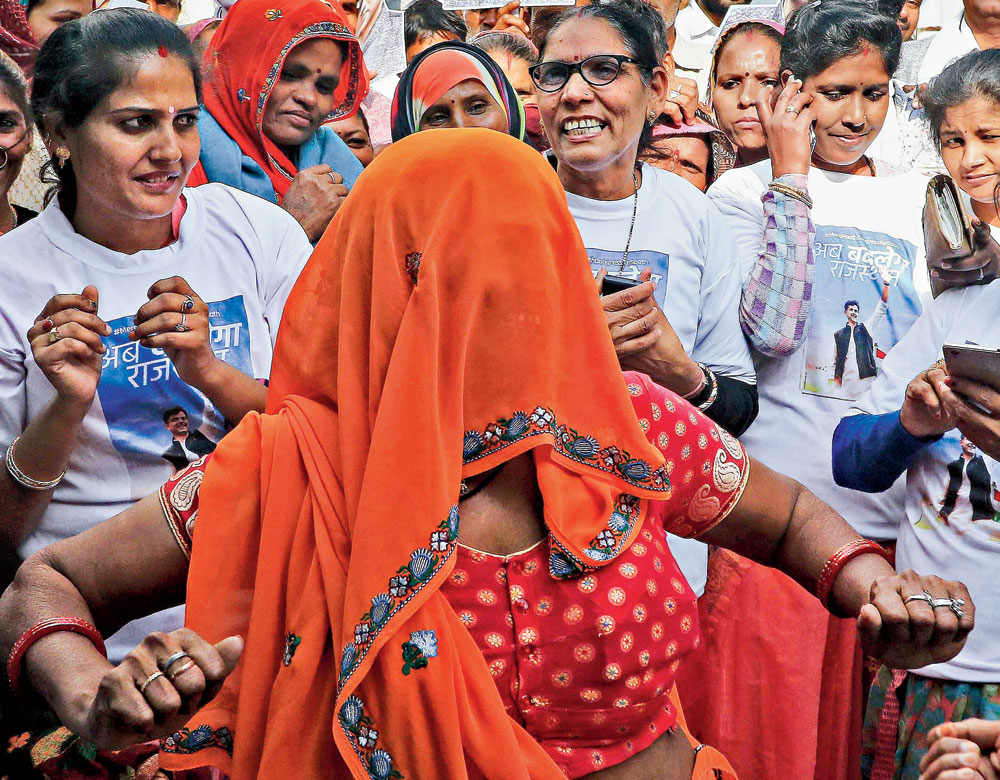 It’s the cup that cheers but not inebriates.

The Congress has snatched all three critical Hindi heartland states from the BJP in a spectacular comeback.

While this explodes the myth of Narendra Modi’s invincibility, the slender margins of victory in Madhya Pradesh and Rajasthan have ensured the Congress doesn’t lose its head — the leadership will have to put its nose to the grindstone to optimise the gains in the 2019 parliamentary elections.

Chhattisgarh, where the Congress didn’t have a credible leadership and faced an unforeseen hurdle in the form of the Ajit Jogi-Mayawati front, the outcome was an astounding sweep.

If that reflected the ground reality in a region contiguous with Madhya Pradesh and having similar issues of rural distress and high-level corruption, the outcome is baffling, exposing the inadequacies of the Congress’s election management.

The Congress cannot wallow in the comfort of victory as voters have punished the incumbent governments for failures and follies but didn’t cut the cables with the BJP.

Despite significant swing in the bigger states of Madhya Pradesh and Rajasthan, the vote shares of the BJP and the Congress are almost similar, setting the stage for a tough battle a few months later in the parliamentary polls.

Top Congress leaders admit privately that the outcome in Madhya Pradesh and Rajasthan had fallen far below expectations but insist the ouster of the BJP will dramatically change the political dynamics in the coming months.

Arguing that the core message from this round is that the Congress is in ascent while the BJP is adrift, most leaders insist the party will be able to turn an inch into a mile through good governance.

While the dominant feeling is that Rahul Gandhi’s crusading spirit had been rewarded and that the local leaders and workers fought valiantly against the exceptional deployment of money and muscle by the BJP, there are whispers of wrong candidate selection in Rajasthan and some strategic flaws in Madhya Pradesh.

The Waraseoni seat in Madhya Pradesh is a case in point: the leadership projected chief minister Shivraj Singh Chouhan’s brother-in-law Sanjay Singh Masani as a prize catch and gave him the ticket ignoring strong contenders. Congress worker Pradeep Jaiswal rebelled and won as an Independent, using Indira Gandhi’s photographs in his campaign. Masani got merely 12,000 votes and came fourth.

The Congress has now persuaded Jaiswal and three other rebels to return. Late on Tuesday night, the party sought time from Madhya Pradesh governor Anandiben Patel to form the government as soon as the results are officially declared. In the letter, state unit president Kamal Nath said the Congress had emerged as the “single largest party with majority support”. All the Independents had assured the party of their support, he added.

Many Congress leaders feel that the display of a little more wisdom in candidate selection could have pushed the tally beyond 130 — the majority mark is 116. Even in Rajasthan, the Congress will easily form the government with the help of Independents, BSP, CPM and the Bharatiya Tribal Party but the failure to get majority on its own will hurt.

Most leaders acknowledge that Chhattisgarh is the true reflection of unrest in the villages and the results in both Madhya Pradesh and Rajasthan had exposed the party’s inability to match the RSS-BJP’s last-minute mobilising skills.

“In both states the BJP salvaged its position using RSS networks and massive resources. We will have to drastically enhance our capabilities to translate our potential into success,” a key Congress strategist said.

He added on condition of anonymity: “This change has largely been induced by disgruntled villagers. We have got a credible and strong leader in Rahul Gandhi but that’s not enough. Telangana showed that the Congress does not have a local organisational structure. Mizoram’s message is that we aren’t adept at dealing with anti-incumbency as well as the BJP does.”

Congress strategists know in their heart of hearts that the hostile political climate in Rajasthan and 15 years of accumulated anti-incumbency in Madhya Pradesh called for better results.

A young Rahul aide said: “These two states were coming to us on a platter. We appear to have messed it up so badly that we just managed to squeeze past — bruised and battered. People are angry but are we there to encash that anger?”

The tussle among senior leaders in Madhya Pradesh and Rajasthan during ticket distribution might have spoiled the Congress’s chances in at least a dozen constituencies in each state. While rebel management was pathetic in Rajasthan, lack of coordination and unity of purpose among top leaders cast a shadow on electioneering in Madhya Pradesh.

There was a false perception that Digvijaya Singh had been sidelined even as he played a crucial role in Madhya Pradesh and no attempt was made to address that damaging whisper campaign. Some people pointed to a flawed communication strategy — greenhorns were given prominence while seasoned spokespersons were ignored.

The cliffhanger in Madhya Pradesh and Rajasthan may force the party leadership to go back to the drawing board to analyse its overall electoral tactics for the Lok Sabha polls.

While this so-called semi-final has given the much-needed psychological boost to Congress workers, sincere soul-searching can help the party refurbish its organisational set-up and sharpen its communication strategy.

But the big gain is what the party is obsessed with — Rahul’s emergence as the demolition man. The party knows the exit signs that might have unnerved the BJP may also herald perception changes in the minds of people about Rahul’s ability to confront Modi.

While the results bear testimony to the diminishing power of Modi’s acerbic rhetoric and manoeuvring skills, they also imply Rahul has established himself as the ready alternative.