6000 individuals rescued with the help of army, NDRF and BSF, efforts being made to rescue another 1950 people stranded in flood hit areas 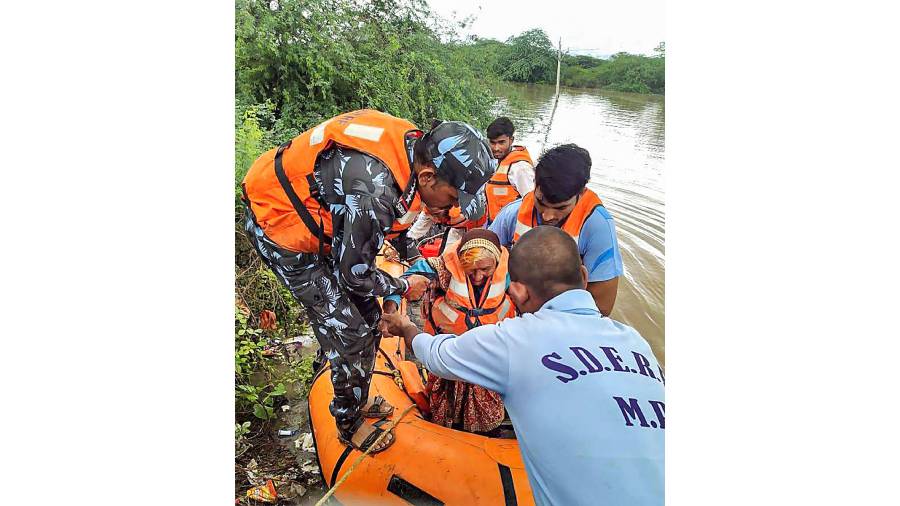 The flood situation was "grim" in north Madhya Pradesh where over 1,200 villages were affected by the deluge following heavy rains and 5,950 people were shifted to safer places with the help of the Army, NDRF, BSF and state agencies, Chief Minister Shivraj Singh Chouhan said on Wednesday.

He said 1,950 people were still stranded in the flood-hit areas and efforts were on to rescue them.

Rail services between Shivpuri and Gwalior and telecom services in Morena district were badly affected due to the monsoon fury, the CM told reporters.

The rescue operations using helicopters resumed again on Wednesday, after being affected due to the bad weather on Tuesday.

The CM undertook an aerial survey of the flood-hit areas on Wednesday afternoon.

"Four columns of the Army, BSF, NDRF teams and 70 teams of the SDRF have been deployed for the rescue work. More teams of the NDRF are coming...five helicopters of the Air Force, including four in Gwalior and one in Shivpuri, have also been pressed into the rescue operations, the CM said.

But, it is a matter of relief that the water level is coming down in some places, he said.

Some villages in Sheopur district were completely submerged, but the people stranded there were safe. The Army was reaching those villages for the rescue operations, he said.

The Army also reached Datia, where 1,100 people were rescued from 36 villages, he informed.

Some people were airlifted from a place in Datia districts where all the main roads are shut due to inundation, he said.

Two bridges in Datia district collapsed due to flooding. A crack emerged on a bridge over the National Highway no. 3, hence it has been closed as a precaution, he said.

Nearly 3,000 people were shifted to relief camps in Gwalior, where 46 villages were affected. In Shivpuri, 800 people were rescued from 22 villages, the CM said.

Chouhan further said there was a danger of flooding in Bhind and Morena districts as the water level of the Chambal river was rising due to heavy showers.

The level will further go up in these districts as water was released from a barrage over the Chambal river, he said.

People from low-lying villages in these districts were being evacuated, he added.

Chouhan also said that the infrastructure was completely damaged at several places in these districts.

The telecommunication infrastructure in Morena and other places was completely destroyed due to the floods. I have spoken to officials of the Union telecom ministry in this regard, he said.

Train services between Shivpuri and Gwalior were halted as the rail infrastructure was badly damaged on the section, he said.

Chouhan said he spoke to Prime Minister Narendra Modi and Union Home Minister Amit Shah on Wednesday and informed them about the flood situation in the state.

Earlier in the day, after holding a meeting with officials in the state capital Bhopal, Chouhan left for Gwalior to undertake an aerial survey of the flood-hit districts.