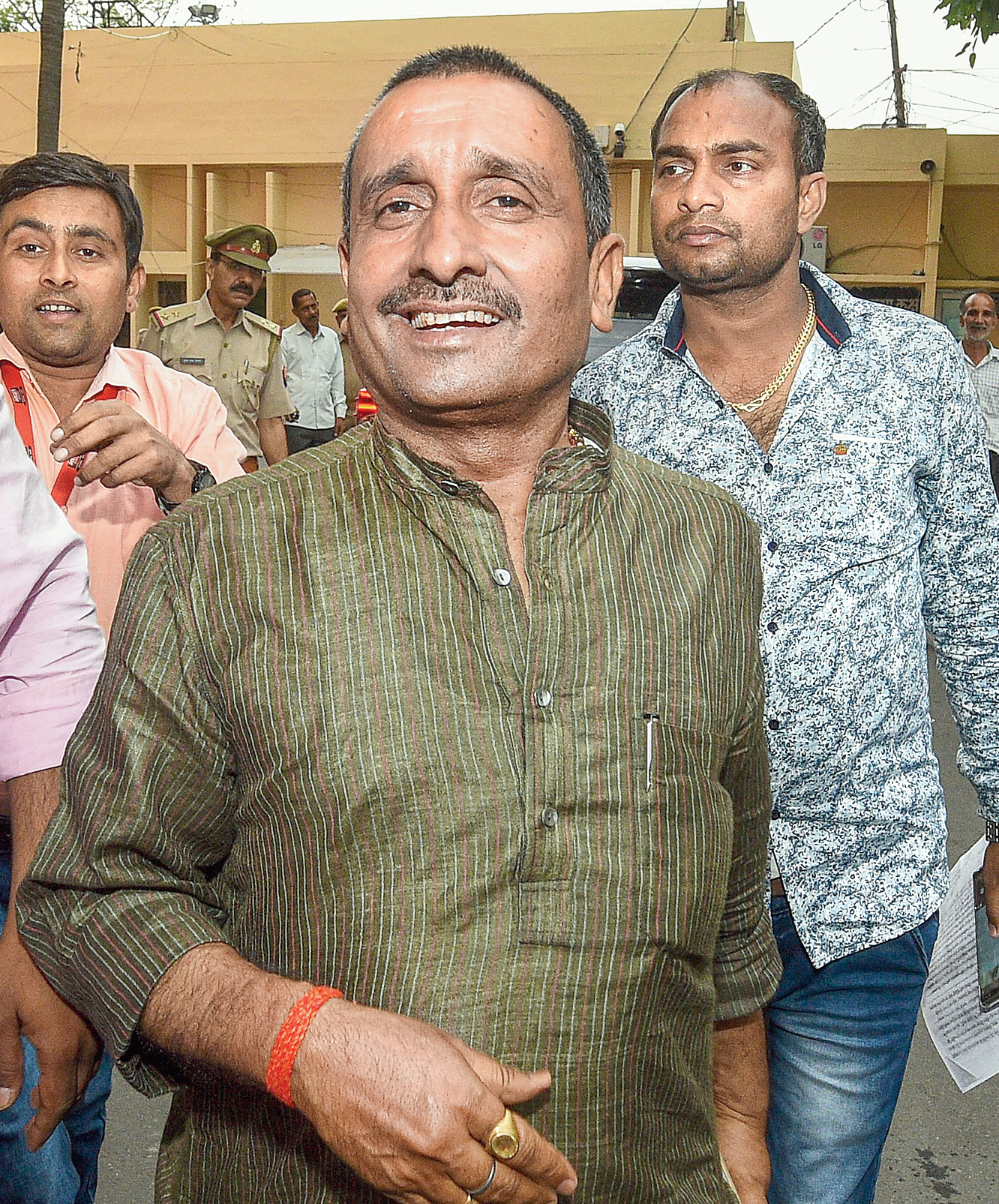 The truck with its number plate blackened at the site of the accident on Sunday.
(PTI)

The BJP has sought to address mounting outrage in the country by suspending Kuldeep Singh Sengar, the rape-accused MLA, from the party.

The jailed MLA is back at the centre of a storm after the rape victim and her lawyer were critically injured and two of her aunts died in a road collision on Sunday.

The suspension followed chief minister Yogi Adityanath’s recommendation on Monday for a CBI probe into the collision. On Tuesday, PTI reported that the Centre had handed the probe to the CBI, which is already probing the rape case. On Sunday, a truck with a blackened registration plate had cut across the road and rammed the car the woman and her relatives were travelling in.

Uttar Pradesh BJP chief Swatantra Dev Singh, however, claimed that Sengar had been suspended “much before” but didn’t specify when.

“He was suspended from the party much before and his suspension would continue till the probe is on,” Singh told reporters in Lucknow around 2pm.

Party sources, however, said a formal letter on the lawmaker’s suspension had been issued at 10am on Tuesday.

Asked if the party had written to the Speaker to suspend Sengar from the Assembly, Singh walked away without replying.

Demands have been rising to sack Sengar, who represents Bangermau in the Assembly, for what many saw as a plot to kill the rape victim, now on life support in a Lucknow hospital.

“What is the BJP waiting for?” Congress general secretary Priyanka Gandhi Vadra had tweeted on Monday evening with the hashtag BJPsackSengar. “Why has this man not been expelled from their party even when his name is in the latest FIR in the Unnao Rape Case?”

Priyanka followed it up with more tweets on Tuesday, addressing Prime Minister Narendra Modi directly: “For God’s sake, Mr. Prime Minister, divest this criminal and his brother of the political power your party is giving them. It’s still not too late.”

Police had on Monday charged Sengar, his younger brother Manoj Singh Sengar and associate Rinku Singh with murder, attempt to murder and criminal conspiracy on the basis of a complaint by an uncle of the rape victim.

Uttar Pradesh police have constituted a special investigation team to probe the collision.

Doctors at the KGMU Trauma Centre in Lucknow said the rape victim and her lawyer were on ventilator.

Her family members sat on a dharna outside the hospital, demanding parole to her uncle Mahesh Singh, who is in jail for allegedly possessing an illegal weapon, for the last rites of his wife. The dharna ended on the intervention of Samajwadi Party president Akhilesh Yadav. A court granted short-term bail to Mahesh Singh to attend the cremation on Wednesday.

On Tuesday, a senior police officer claimed that Devendra Kishore Pal, the owner of the truck that hit the car, belonged to a family of Samajwadi members.

Dwijendra Tripathi, the Congress spokesperson in Uttar Pradesh, responded: “Even Sengar was SP MLA from 2007 to 2017 before joining the BJP. His supporters had also joined the BJP with him before the 2017 Assembly polls.”

“The police theory reconfirms the involvement of Sengar and his aides in the case,” Tripathi added.

Tripathi and hundreds of Congress members staged a dharna outside the BJP office in Lucknow, demanding the resignation of chief minister Adityanath.