Opposition to take out march over suspension of Rajya Sabha MPs 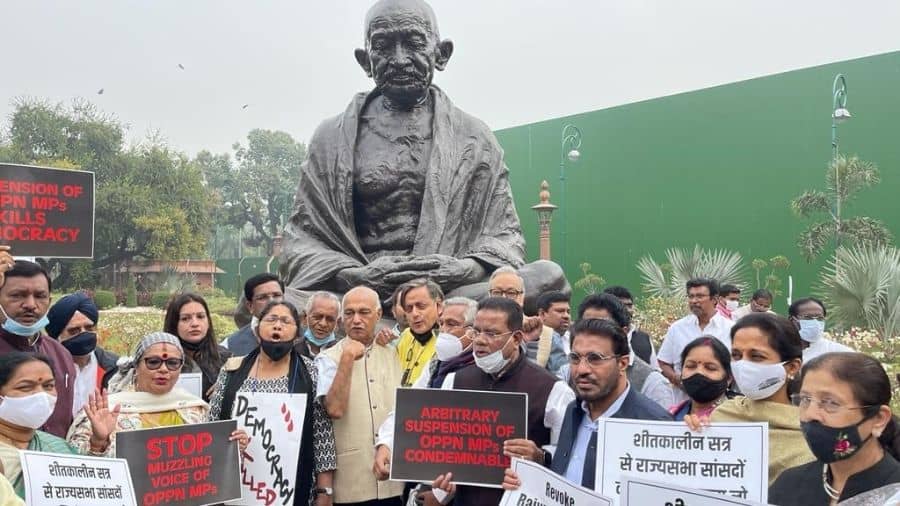 Opposition parties on Tuesday decided to take out a protest march in support of their demand for revoking the suspension of 12 Rajya Sabha MPs and sacking of Union Minister Ajay Mishra whose son has been arrested in the Lakhimpur Kheri violence case.

Leaders of several Opposition parties on Tuesday met in the chamber of Leader of Opposition in the Rajya Sabha Mallikarjun Kharge and discussed their further strategy.

Opposition MPs in the Lok Sabha and Rajya Sabha will take out the march from Gandhi statue in Parliament premises to Vijay Chowk at 1 pm.

Opposition parties have been protesting against the suspension of MPs, which they have termed as undemocratic and against the rules of the House. Proceedings of the Rajya Sabha have been disrupted repeatedly on the matter.

Eight people, including four farmers, were killed in the Lakhimpur violence on October 3.

"I have given a suspension of business/notice under Rule 267 to discuss the recent SIT report on the manslaughter of Lakhimpur. We demand that MoS Ajay Mishra be immediately removed from his position to ensure a free and fair trial," Kharge said on Twitter.

"In order to ensure a free and fair trial of the murder case of innocent farmers, the Mos, who is father of the accused, must immediately be removed from his position," Kharge said in his adjournment notice under Rule 267.

The notices were, however, disallowed by Chairman M Venkaiah Naidu.