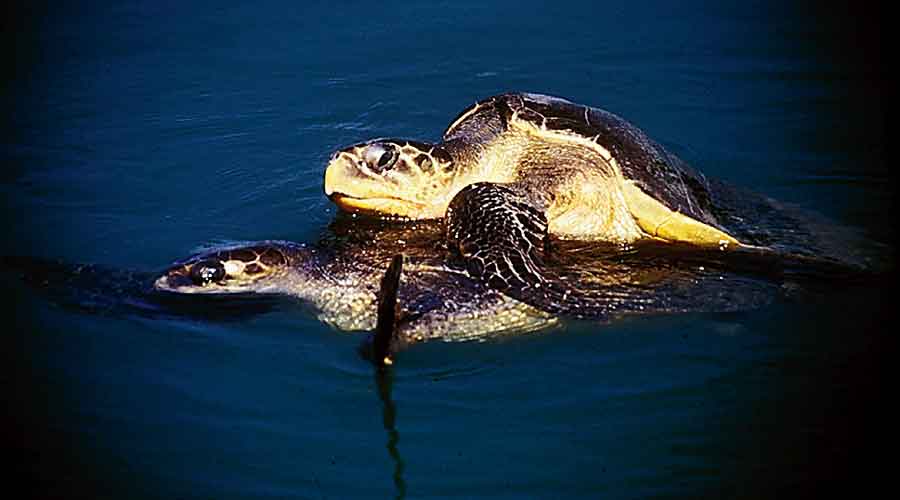 Though no damage has so far been reported to property in Odisha because of the rainfall triggered by cyclonic storm Asani, lakhs of eggs laid by the endangered olive ridley sea turtles were washed into the sea by the high tidal waves caused by the storm in southern Odisha.

Berhampur divisional forest officer (DFO) Amlan Nayak told The Telegraph: “Nearly 5.5 lakh olive ridley turtles come for nesting on the beaches in Ganjam district. Each one lays 100 eggs. Nearly 15 to 20 per cent of eggs have been destroyed. We are yet to count the exact numbers. A clear picture will emerge on May 14 after the cyclonic storm passes away.”

Nayak said every year 10 to 15 per cent of eggs get destroyed because of various factors such as sea erosion and subsequently the eggs get exposed to various outside actors.

“But this year, the number of eggs destroyed is more because of the high tide caused by cyclone Asani,” Nayak.

Director general, India Meteorological Department (IMD), Mrutyunjay Mohapatra, told Odia news channels that: “We are not expecting any structural damage in Odisha under the impact of cyclonic storm. Squally wind speed reaching 40-50 km per hour gusting to 60 kmph is likely to continue along and off coast till Thursday.”

West Godavari and Visakhapatnam bore the brunt of the super cyclonic storm Asani, most of the places in Odisha witnessed light to moderate rainfall for a few hours on Wednesday.

A red alert has been issued for districts in coastal Andhra, including Guntur and Krishna, Srikakulam, Vizianagaram and Godavari districts.

A strange looking gold colored chariot was seen floating in the Bay of Bengal coast near Sunnapalli Sea in the north coastal Andhra Pradesh on Tuesday, generating curiosity among people to know from where it had drifted away to the Andhra Pradesh coast. Andhra Pradesh police seized the gold coloured chariot.

“The cyclonic storm is very likely to move nearly northwards for next few hours and recurve slowly north-northeast wards along Narsapur, Yanam, Kakinada, Tuni and Visakhapatnam coasts  and emerge into west central Bay of Bengal off North Andhra Pradesh coasts by night. It is likely to weaken gradually into a depression by May 12 morning,”  the IMD said in its latest bulletin.

Heavy rain is expected on Thursday under the influence of Asani in Koraput, Gajapati, Ganjam, Malkangiri and Rayagada districts.