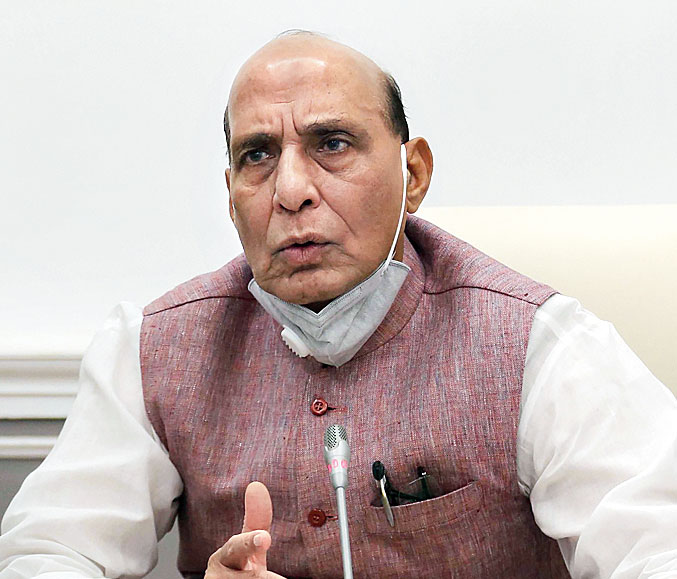 Defence minister Rajnath Singh had on Tuesday broken the government’s silence on the standoff and said that a “sizeable number” of Chinese troops had moved into eastern Ladakh and that India too had taken steps to deal with the situation.
(PTI)
Our Special Correspondent   |   New Delhi   |   Published 03.06.20, 08:49 PM

The northern army commander, Lieutenant General Y.K. Joshi, is camping in Ladakh to review the ground situation along the Line of Actual Control (LAC) ahead of the June 6 meeting between top military leaders of India and China to resolve the border standoff, government sources said.

Defence minister Rajnath Singh had on Tuesday broken the government’s silence on the standoff and said that a “sizeable number” of Chinese troops had moved into eastern Ladakh and that India too had taken steps to deal with the situation.

Rajnath’s statement was the first official confirmation of the Chinese build-up as the Centre had maintained a studied silence on the “alarming” situation in eastern Ladakh where the troops of the two countries have been locked in a face-off in areas such as the Pangong lake, the Galwan valley, Demchok and Daulat Beg Oldie since early last month.

“Lt Gen. Joshi reached Ladakh on Tuesday and has been camping there to review the prevailing situation on the ground. He is expected to send a detailed report to the army headquarters ahead of Saturday’s crucial meeting between the military commanders of the two countries,” said a defence ministry official.

Joshi, the official said, is holding meetings with local commanders.

According to reports, significant numbers of Chinese troops have been camping in the Indian side of the LAC in the Galwan valley and on and near the Pangong Tso.

“Several rounds of talks have taken place between local commanders over the past three weeks but so far no concrete solution has been achieved. The ground situation remains the same as both sides have refused to back off,” the official said.

As recent as on Tuesday, major general-level commanders of India and China had met at the LAC in a bid to defuse the tension but no breakthrough was achieved, the official said.

Lt Gen. Joshi’s visit to Ladakh assumes significance as he is well aware of the area and the disputed territories along the LAC. This is his second visit to Ladakh amid the growing tension between the two armies. On May 22, he had accompanied army chief M.M. Naravane during a visit to Ladakh.

The flashpoint between the two sides in this sector is said to have been triggered by New Delhi’s move to construct a road within Indian territory near the lake and the Chinese People’s Liberation Army’s objection to it.