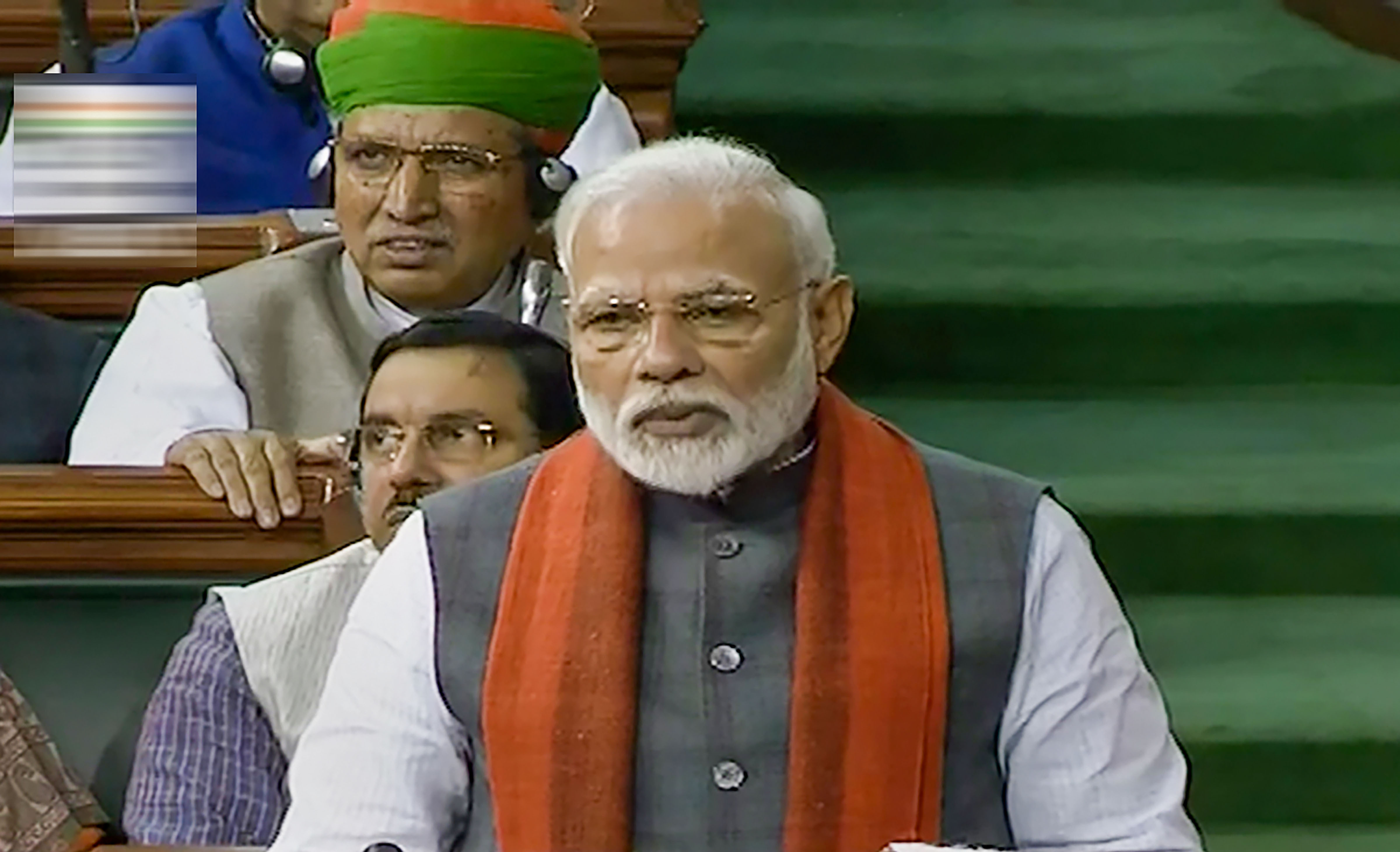 Prime Minister Narendra Modi announces the formation of a trust for the construction of a Ram Temple in Ayodhya in the Lok Sabha, during the ongoing Budget Session of Parliament in New Delhi, Wednesday, February 5, 2020
PTI
Agencies   |   New Delhi   |   Published 05.02.20, 12:23 PM

Hours after Prime Minister Narendra Modi announced that the Union cabinet has given its nod to the formation of a trust to construct a Ram Temple in Ayodhya, the Election Commission has clarified that its approval was 'not required' for the government to make the announcement.

Responding to questions on whether the government required a clearance from the poll panel to announce the trust as the model code was in place in Delhi, an EC spokesperson said the nod was 'not required'. Delhi is set to go to polls on Saturday.

On the allegations of poll violations due to the announcement, Union minister Prakash Javadekar said it would be incorrect to link the decision of the Union cabinet with the Delhi Assembly polls.

'This is the decision taken for the temple in Ayodhya. (It has) Nothing to do with Delhi. The whole country is not under elections. Let us not confuse the situation,' he told reporters at the briefing of decisions taken by the Union cabinet.

He was asked why the decision was announced on Wednesday and not on Sunday after the Delhi elections.

Earlier in the day, making a statement in the Lok Sabha soon after the meeting of the Union cabinet, Modi said, “We have readied a scheme for the development of Ram Temple in Ayodhya. A trust has been formed. It is called 'Shri Ram Janambhoomi Teertha Kshetra.”

Since Parliament is in session, the government decided to inform the House on the important decision taken by the Cabinet.

The Prime Minister said that after the verdict on the Ram Janmabhoomi issue came out, the people of India displayed remarkable faith in democratic processes and procedures.

“Let us all support construction of a grand Ram Temple in Ayodhya,” he said, amid “Jai Shri Ram” slogans from the treasury benches.

'It was mandatory for the government to implement the decision. I congratulate Prime Minister Narendra Modi for taking steps to implement the court's decision,' Shiv Sena's Rajya Sabha member Sanjay Raut tweeted Thackeray as saying.

Leader of Opposition in the state Assembly Devendra Fadnavis also hailed the Centre's announcement as 'historic'.

'The wait for a grand temple of Lord Ram will be over soon,' he tweeted.

Historic decision to set up Shri RamJanmaBhumi Tirth Trust !
Many many thanks to Hon PM @narendramodi ji for fulfilling the aspirations of crores of RamBhaktas around the world !
The wait for a grand temple of Lord Shri Ram will be over soon ! #MandirWahinBanayenge #JaiShriRam https://t.co/JVhnPxVwgE

Hailing the decision, MNS chief Raj Thackeray hoped the process to construct the temple would be expedited.

'The central Cabinet has given a go-ahead to form 'Shri Ram Janambhoomi Tirtha Kshetra' assigned in the task building of the Ram Mandir. We thus, expect the process of building the Ram Mandir to be expedited and we wholeheartedly applaud the decision of the entire Cabinet,' he tweeted.

The Central Cabinet has given a go ahead to form a trust ‘Shri Ram Janambhoomi Tirtha Kshetra’ assigned in the task building of the Ram Mandir.
We thus, expect the process of building the Ram Mandir to be expedited and we wholeheartedly applaud the decision of the entire Cabinet

The Supreme Court had directed the government to form the trust within three months and the deadline was ending on February 9.

It has also been decided to transfer 67.703-acre land to the trust, he said, adding that the Uttar Pradesh government has agreed to give five acre of land to the UP Sunni Wakf Board, as directed by the Supreme Court in the Ayodhya matter.

Later in the day, the Uttar Pradesh government allotted five acres of land in Ayodhya district to the Sunni Central Waqf Board as directed by the Supreme Court.

The land is in Dhannipur village in tehsil Sohawal in Ayodhya on the Lucknow highway, about 18 kilometres from the district headquarters, state government spokesperson Shrikant Sharma told reporters.

The decision was taken at a cabinet meeting chaired by Uttar Pradesh chief minister Yogi Adityanath on Wednesday morning.

'The state government had sent three alternatives for land to the Centre. This one was accepted by the Centre and state cabinet has approved its allotment. There is a good transportation facility to reach here and communal amity and law and order are also good,' Sharma added.

During his address in the Lower House, Modi said in India, be it Hindus, Muslims, Sikhs, Christians, Buddhists, Parsis or Jains, everyone is a part of one “broad family”.

“Development must take place for every member of the family. Our government is moving forward with the mantra of 'sabka sath sabka vikas' so that everyone is happy,” he said.

Seeking to emphasise the importance of the announcement, Modi repeated twice “Aayee Aayee” (Come come) before urging all members to support in one voice the construction of the Ram Temple.

A permanent provision that one of the 15 trustees will be from the SC (scheduled caste) community shows the inclusive approach of the BJP led government, he said.