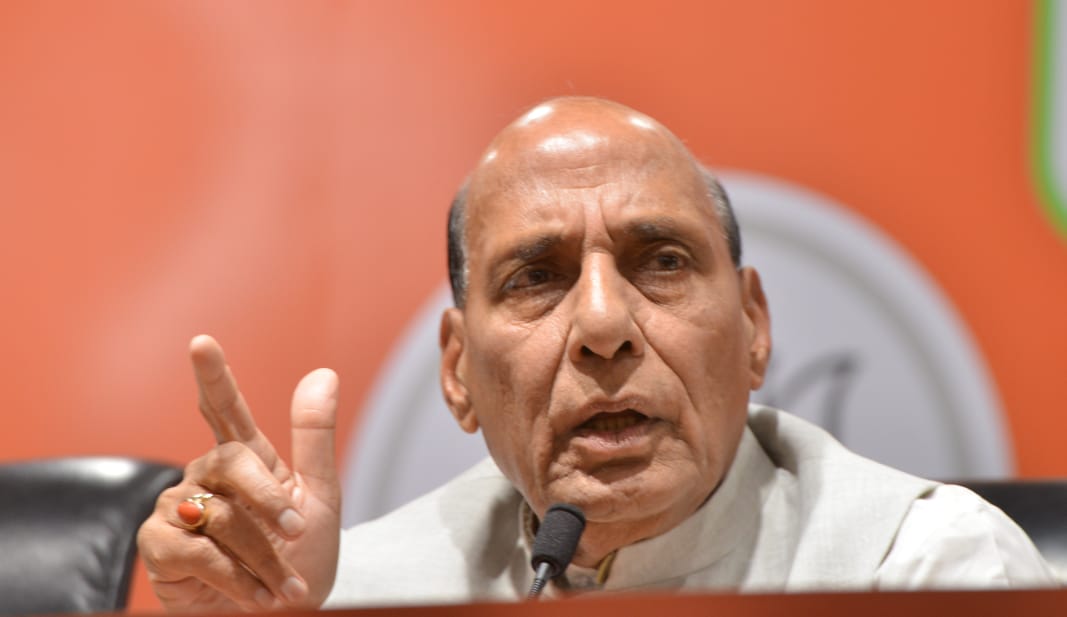 “Pokhran is the area which witnessed Atal Ji’s firm resolve to make India a nuclear power and yet remain firmly committed to the doctrine of ‘No First Use’. India has strictly adhered to this doctrine. What happens in future depends on the circumstances,” Rajnath tweeted
(Prem Singh)
Imran Ahmed Siddiqui   |   New Delhi   |   Published 16.08.19, 10:10 PM

Defence minister Rajnath Singh on Friday said the future of India’s “no-first-use” (NFU) policy on nuclear weapons would depend on circumstances, injecting a degree of ambiguity into a core national security doctrine formally announced by the Atal Bihari Vajpayee government 16 years ago.

The statement came amid escalating tensions between India and Pakistan over the amendment of Article 370 and hours before a related UN Security Council meeting.

“Pokhran is the area which witnessed Atal Ji’s firm resolve to make India a nuclear power and yet remain firmly committed to the doctrine of ‘No First Use’. India has strictly adhered to this doctrine. What happens in future depends on the circumstances,” Rajnath tweeted after visiting Pokhran to mark the first death anniversary of former Prime Minister Vajpayee under whose government India had conducted nuclear tests in 1998.

Pakistan, which had said previously it needed to develop small nuclear weapons to deter a sudden attack by India, does not have an NFU policy for its nuclear arsenal.

India and China are the only countries that possess nuclear weapons and have declared NFU doctrines.

At least one defence official said Rajnath’s tweet signalled a rethink but sections of nuclear and strategic affairs specialists said it was in line with what others had contended but did not mark a policy change yet.

“Rajnath Singh’s statement signals a rethink on our commitment to not be the first to launch a nuclear strike in the event of war, considering Pakistan’s continued support to infiltrators in Kashmir and its regular nuclear blackmail,” an official at the army headquarters told The Telegraph.

Another official said the defence minister was in sync with the Narendra Modi government’s muscular policy on national security and drew attention to the Prime Minister’s campaign speech in April.

In 2003, India had formally announced its nuclear command and control system, saying it would respect the NFU doctrine and carry out a nuclear strike only if a nuclear, chemical or biological attack was launched on its forces.

The then defence minister, George Fernandes, had said India would not be the first to launch a nuclear strike if war broke out.

In its manifesto for the 2014 Lok Sabha polls, the BJP had said it would “study in detail India’s nuclear doctrine and revise and update it to make it relevant to challenges of current times”. Till now, no such study has been publicly announced.

In 2016, the then defence minister, Manohar Parrikar, had said: “Why a lot of people say India has no-first-use policy…. Why should I bind myself? I should say I am a responsible nuclear power and I will not use it irresponsibly. This is my personal thinking.”

Following an uproar, the defence ministry had issued a statement saying it was his personal opinion and not the official position.