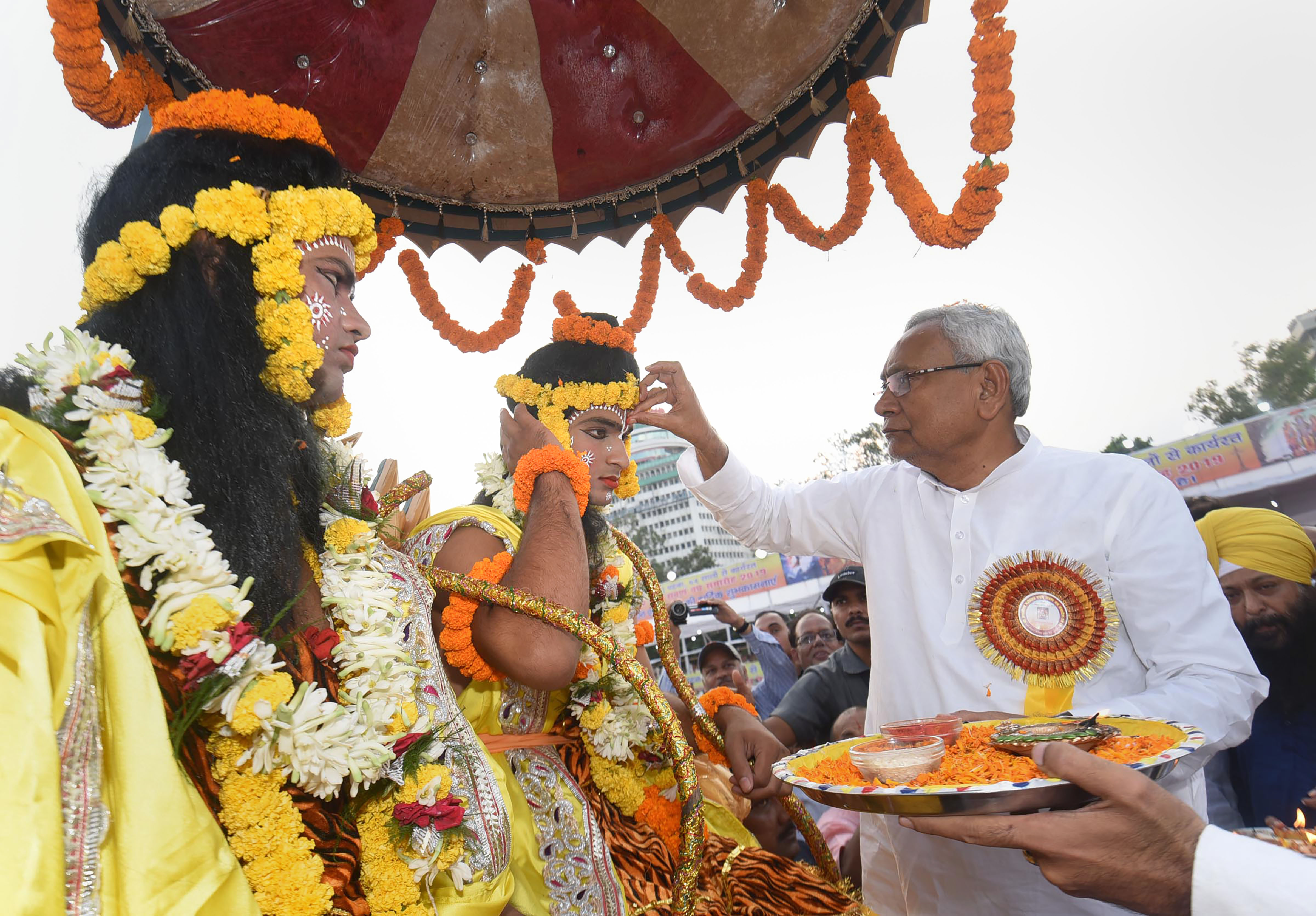 Huge cutouts of Ravana, his brother Kumbhakarna and son Meghnad were burnt on Dussehra in Patna on Tuesday with traditional fanfare, but BJP leaders were conspicuous by their absence at the ceremony presided over by Bihar chief minister Nitish Kumar, triggering fresh speculation of rift within the NDA in the state.

The turnout at the historic Gandhi Maidan which has been the venue for 'Ravana Vadha' since ages was thinner than usual, understandably because of the destruction wrought upon the city by heavy rainfall that has left many localities waterlogged.

On the previous day, the cutout of Ravana, the largest among the three, came down crashing apparently because of the ground lacking firmness to hold its weight. It was later erected with the help of machines and supported with huge bamboo sticks to make it stand tall till the next day.

Nevertheless, the chief minister flanked by senior political figures like Assembly speaker Vijay Kumar Chaudhary and state Congress president and MLC Madan Mohan Jha took to the dais erected for the festivities at the assigned hour and kicked off the ceremony by lighting lamps.

After rendition of songs and performance of dances depicting the epic battle in which the ten-headed monster was slain by Ram and his army, the cutouts laden with firecrackers burst into flames amidst chants in praise of the king of Ayodhya who took on the mighty emperor of Lanka to secure the release of his abducted wife Sita.

All eyes, however, lingered on the empty seats on the dais which were supposed to be occupied by deputy chief minister Sushil Kumar Modi, Union minister Ravi Shankar Prasad, who is also the local MP from Pataliputra, MP Ram Kripal Yadav and state minister and local MLA Nand Kishore Yadav, among others.

The development came close on the heels of a week-long spat between leaders of the BJP in particular its firebrand Union minister and Begusarai MP Giriraj Singh and the Janata Dal (United) which is headed by Kumar over the state government's handling of the inundation of large parts of the Bihar capital after torrential rainfall battered the city late last month.

The war of words was seen as a precursor to the aggression with which the BJP might approach the Assembly polls in Bihar next year, unwilling to remain content with its status as a junior coalition partner in the wake of the near hegemonic status it has come to enjoy by virtue of its brute majority in the Lok Sabha and the resourcefulness which was on display when it managed to get bills on triple talaq and reorganization of Kashmir passed in the Rajya Sabha, steamrolling the JD(U)'s ideological protestations.

However, when asked about the BJP leaders' absence at the Dussehra function, the party's state spokesman Nikhil Anand asserted 'it would not be proper to view the absence of BJP leaders at the event as a sign of some discord between the NDA allies.'

'The National Democratic Alliance (NDA) is rock solid and the acrimony that was seen recently is a thing of the past. The BJP is more concerned about winning the Assembly polls in Maharashtra and Haryana besides the by-elections in Bihar, which we are contesting in alliance with the JD(U),' Anand told PTI.

'It may be recalled that Ravi Shankar Prasad had announced some time ago that he will not be celebrating Dussehra this year since, as the local MP, he felt bad that many residents of the city would be deprived of enjoying the festivities because of the disruption of normal life they have suffered. Similar is the sentiment of other party leaders,' he said.

'All BJP leaders who could not be seen at the Dussehra function had, notably, stayed away from the Durga Puja celebrations as well. Not because we are sulking, but because the idea is to tell the people of Patna that the party, which they have been voting for long, is with them in their hour of adversity,' he added.