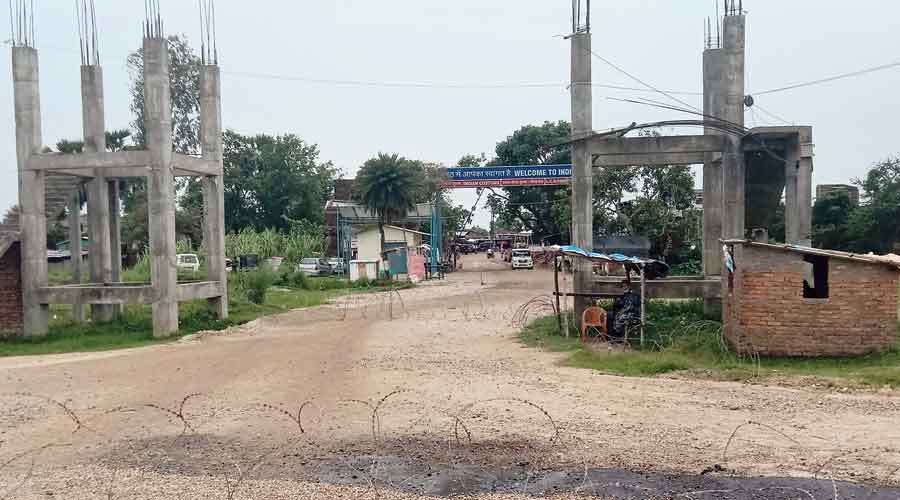 The road whose construction has been stopped lies behind the Indian customs checkpost at Sitamarhi in Bihar
Sanjay Choudhary
Dev Raj   |   Patna   |   Published 09.07.20, 01:25 AM

Nepal has stopped the construction of a branch of an Indian national highway along the international border in Bihar’s Sitamarhi district claiming it had encroached on no-man’s land, further straining the ties between the countries.

The neighbouring country’s move enraged those engaged in the road-laying project and also locals on the Indian side, following which security personnel from both countries intervened. Sashastra Seema Bal (SSB) personnel pacified the residents and brought the situation under control.

“Nepal officials and its armed police force, which acts as border guards, objected to the construction of a branch of National Highway 104 going up to no-man’s land at the Bhitthamore border on Tuesday. They said a portion of the around 250m offshoot of the national highway was encroaching on no-man’s land,” an SSB officer told The Telegraph.

“The Bihar government’s road construction department was doing the job. It had to be stopped and it is yet to resume. Work can now begin only when the land dispute is settled,” he added.

The SSB officer denied that there had been any fracas between the security personnel of the two countries, but said the force’s 51st battalion had written to the Sitamarhi district magistrate requesting her to facilitate the measurement of the land.

District magistrate Abhilasha Kumari Sharma said she was monitoring the situation and was in constant touch with her counterpart in Nepal’s Mahottari district.

“A team led by an additional district magistrate, of which the area’s circle officer is a part, is at the spot. Officials from the Nepal side are also present. The land measurement is being done jointly. There is friction, an interaction is going on and both sides are cooperating with each other. The matter will be sorted out amicably,” she said.

The road tussle is the latest episode in the souring of ties between the two countries after Nepal last month approved a new map with three territories held by India.

On June 13, Nepali border guards had shot dead a civilian from Sitamarhi district.

In East Champaran district, 110km from Sitamarhi, Nepal had on Tuesday put up a signage on a bridge between the two countries to indicate that its border started from there. However, the signage was removed after the SSB and local officials objected on the ground that border demarcation had not been done in that area.

Nepal has also not allowed since June the repair and strengthening of a 4.1km-long embankment on the Lalbakeya river flowing along the border close to East Champaran district. With rainfall above normal this monsoon in Bihar and heavy rain in Nepal, the district is staring at the possibility of a flood, which could be aggravated if the embankment is not completed.