Nearly 25 per cent polling till noon in Haryana Assembly elections

As many as 1,169 candidates, including 105 women from various political parties, are contesting the election. 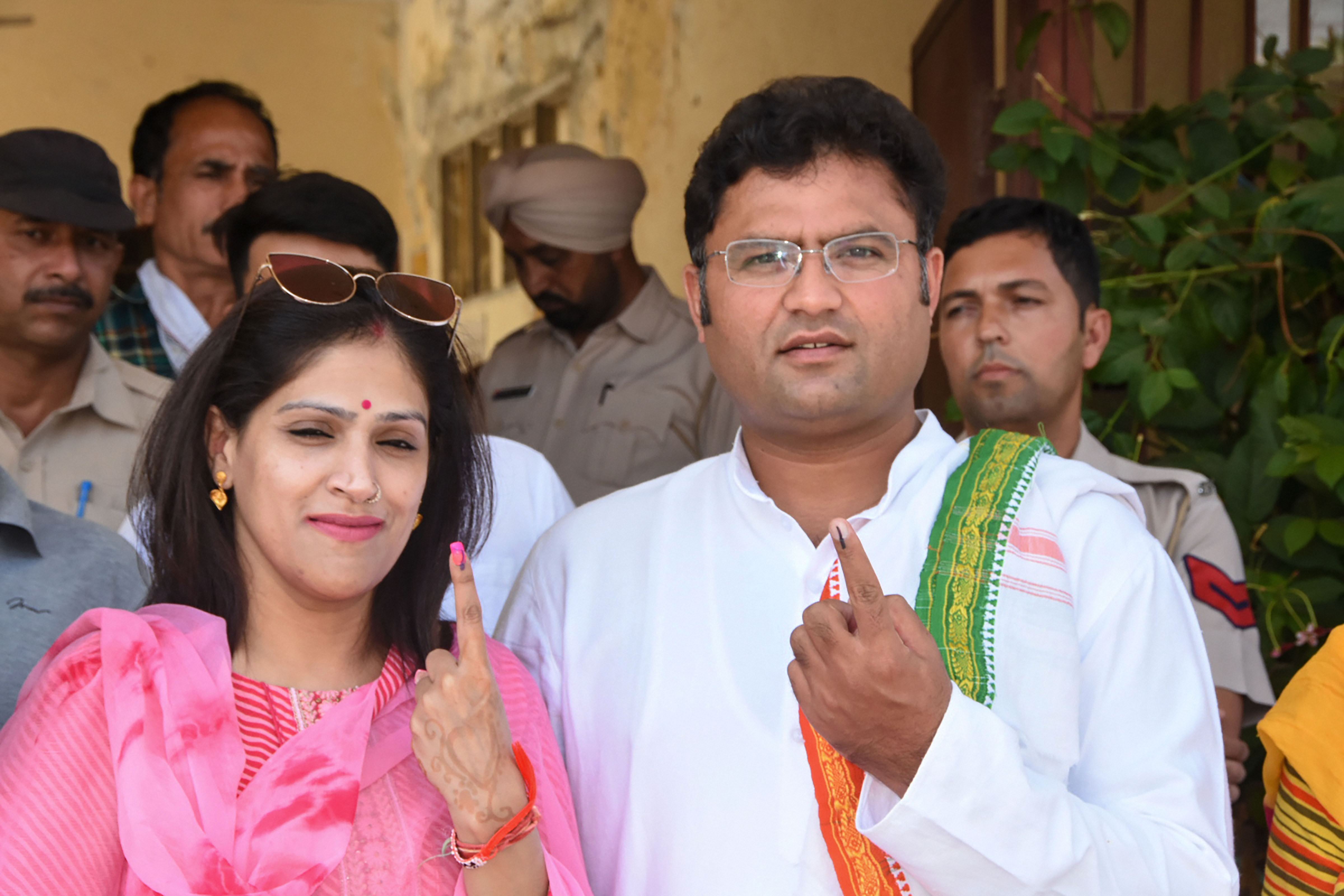 Haryana has recorded a polling percentage of nearly 25 per cent by noon as voting began on Monday morning in 90 assembly constituencies of the state amid tight security.

Polling began at 7 am and will continue till 6 pm, officials said.

As per the Election Commission data, brisk polling was going on in many districts and around noon close to 25 per cent voters had exercised their votes.

Assembly segments, where moderate polling was witnessed by noon included Baroda (23 per cent), Garhi Sampla-Kiloi (25.40 per cent), Punhana (25 per cent) and Adampur (25.37 per cent).

Among the segments where polling was comparatively less included Gurgaon (14.30 per cent), Faridabad (12.26 per cent), Panchkula (19.20 per cent) and chief minister Manohar Lal Khattar's home constituency Karnal (16.10 per cent).

As many as 1,169 candidates, including 105 women from various political parties, are contesting the election.

Haryana's lone woman minister Kavita Jain, along with her husband and BJP leader Rajiv Jain and their two children, both first time voters, were among the early voters to cast vote in Sonipat.

Khattar travelled by a Jan Shatabdi train from Chandigarh to cast his vote in Karnal from where he is seeking re-election.

Upon reaching Karnal, he rode a bicycle to reach the polling booth and urged people to try and make use of cycle to commute at least short distances as it will help protect the  environment.

Dushyant Chautala rode a tractor to reach the polling booth in Sirsa along with his wife Meghna and MLA-mother Naina Chautala to cast their votes.

Congress leader Bhupinder Singh Hooda cast his vote along with his family members in his constituency in Garhi Sampla-Kiloi in Rohtak.

Before exercising his vote, the two-time former chief minister and his family members offered prayers at a temple. He was accompanied by his wife Asha Hooda, son and former MP Deepender Singh Hooda and daugther-in-law Sweta Mirdha.

While Khattar claimed that BJP will easily achieve its target of winning over 75 seats, Hooda claimed that Congress will make a comeback in the state.

Congress leader Randeep Singh Surjewala along with his wife Gayatri exercised their right to franchise in Kaithal while Haryana Congress chief Kumari Selja cast her vote in Sirsa.

Wrestler-turned-politician and BJP candidate from Dadri Babita Phogat also cast her vote from her native village in Bhiwani along with her father Mahavir Phogat and sister Geeta Phogat.

Some other contesting candidates including Surjewala also offered prayers at temples and other places of worship before casting their votes.

The BJP led by Khattar has set a target of winning 75 seats, while the Congress is hoping to make a comeback following a change in guard in the state.

Currently, the BJP has 48 members in the state assembly.

As many as 19,578 polling stations have been set, including 13,837 in rural areas, chief electoral officer, Haryana, Anurag Agarwal, said.

Tight security arrangements have been made and over 75,000 security personnel have been mobilised for the polls, DGP Manoj Yadava said earlier.

Over 1.83 crore voters are eligible to vote that includes 85 lakh women, over one lakh service voters and 252 transgenders.

This time, out of the total eligible voters, over 89 lakh young voters are under 40 years of age and there are over 3.82 lakh voters, many of them first-timers, who fall in the age group of 18-19 years.

As many as 27,611 Voter Verifiable Paper Audit Trail (VVPAT) machines are being used for the polls.

Agarwal said that webcasting would be done at 3,100 'critical and vulnerable' polling stations in the state.

In the polls, Dushyant Chautala-led Jannayak Janta Party (JJP), a breakaway faction of the Indian National Lok Dal (INLD), is hoping for an improvement in its prospects following the debacle in the recently-concluded Lok Sabha election, in which Bharatiya Janata Party had won all the 10 seats in the state.

The JJP had emerged on the scene following a feud in the Chautala clan in December last year.

Prestige of families of Haryana's famous 'Lals' – Devi Lal, Bansi Lal and Bhajan Lal, who were former chief ministers – is also at stake.