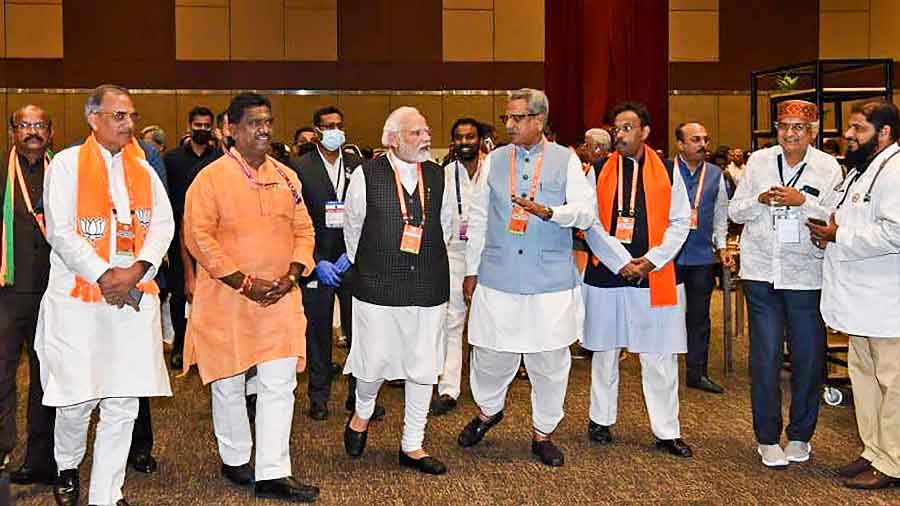 Prime Minister Narendra Modi on Sunday said the NDA government at the Centre has been trying to bring positive change in every Indian's life and make people's life easier during the past eight years.

Addressing a massive public meeting titled 'Vijay Sankalp Sabha' at Parade Grounds here, he said the people of Telangana yearn for a 'double engine growth' and asserted this will be fulfilled when the BJP comes to power in the state.

Elections are due in Telangana next year.

'Double engine' government or growth is a reference made by Modi and BJP of progress in party-ruled states with the aid of the NDA government at the Centre.

"During the past eight years we tried to bring positive change in every Indian's life. We are working tirelessly on how to make people's lives easier, and how to take the fruits of development to every person and region, Modi said.

Once the BJP government comes to power in the southern state, being ruled by the K Chandrasekhar Rao-led Telangana Rashtra Samiti (TRS) since 2014, the pace of development will be faster, Modi said.

During the COVID-19 pandemic, a disaster after 100 years, his government tried to support every family in Telangana, the PM added.

Modi further said the BJP held its two-day national executive meeting on July 2 and 3 here keeping in mind the love of people of Telangana for the party.