The programme aims to contribute to the education, development and empowerment of around 700 million children 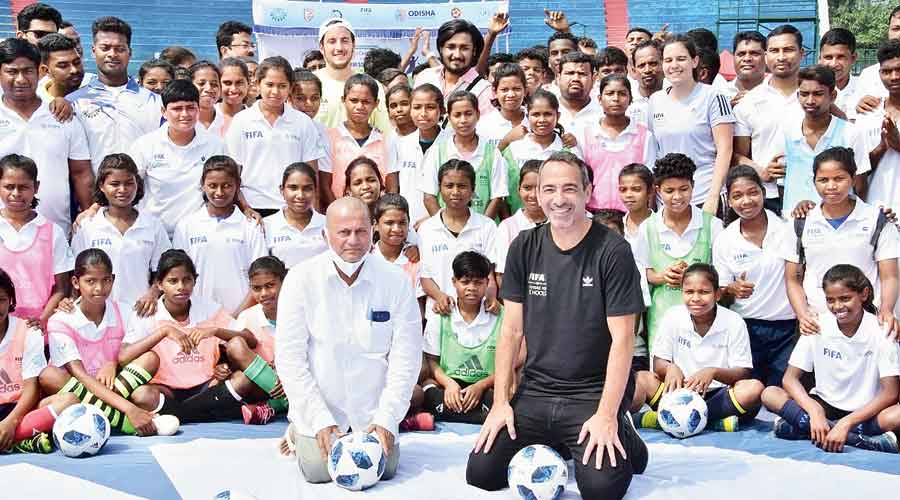 Achyuta Samanta, Youri Djorkaeff and budding football players during the launch of the Fifa Football for Schools programme in the KIIT campus in Bhubaneswar on Wednesday
Telegraph picture
Our Correspondent   |   Bhubaneswar   |   Published 28.10.21, 01:24 AM

Football for Schools (F4S) is a worldwide programme run by the Fifa, which aims to contribute to the education, development and empowerment of around 700 million children. It seeks to make football more accessible to both boys and girls across the globe.

The chief minister congratulated the KIIT (Kalinga Institute of Industrial Technology) and KISS for sustainably creating a conducive ecosystem in channelising passion for sports and nurturing sporting talent and promoting it for the last two decades.

Achyuta Samanta, founder, KIIT and KISS, had been in touch with Fifa president Gianni Infantino for the last one and a half years for bringing the Football for Schools programme to India, officials said.

The launch ceremony was virtually attended by Nik Gugger, Switzerland member of Parliament, and Infantino.

In his virtual address, Gugger said: “Odisha, under the leadership of Naveen Patnaik, has been promoting sports in a big way and has created an example for the whole country.”

Commending Samanta’s contributions to sports, he said: “Dr Samanta has created unparalleled sports infrastructure and invested in sports and sportspersons that is now yielding returns.

“This first-ever initiative of the Football for Schools programme by Fifa in the world is an outcome of his relentless contribution in the field of sports.”

Infantino said: “We are delighted to see Football for Schools launching in India today, one of the first countries in the world in which it has been introduced. Football for Schools is a programme which unites football and education. It has been created to support schools and teachers in inspiring children to learn life skills through fun football sessions.”

In his address, Samanta said: “Under the visionary leadership of Naveen Patnaik, Odisha has become a sports hub and Bhubaneswar a sports capital. He has not forgotten to nurture sports at the grassroots.”

The revolutionary initiative of the Fifa president will make football accessible to all boys and girls in India, he said, while promising all support from KIIT and KISS for implementation of the programme.

In the run-up to the launch of the programme, a three-day capacity-building workshop — “Train the Trainer” — was conducted by Fifa at the KISS from October 25. As many as 100 physical education teachers from all Odisha districts and over 100 football players from KIIT and KISS participated in the training programme, which included both classroom as well as field sessions.