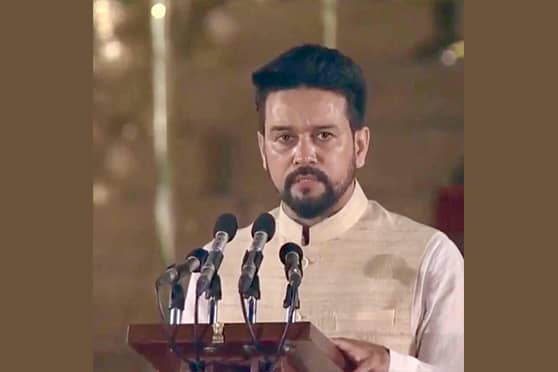 Union minister Anurag Thakur on Tuesday alleged that Congress is trying to stall investigation in the National Herald case by staging protests as the Enforcement Directorate raided the newspaper's office here.

Are Congress leaders above any probe? Does the law of the land not apply to Congress leaders? Is the Gandhi family above law, the Information and Broadcasting Minister told reporters here as Congress workers staged protests against the ED action.

The crocodile tears Congress is shedding is an attempt to stall the investigation, the senior BJP leader said.

The ED on Tuesday raided the head office of National Herald newspaper here and 11 other locations as part of an ongoing money laundering investigation, officials said, a week after it questioned Congress chief Sonia Gandhi.

The searches were carried out under the criminal sections of the Prevention of Money Laundering Act (PMLA) to "gather additional evidence with regard to the trail of funds and they are against those entities who were involved in the National Herald-linked transactions", the officials said.

Thakur also slammed the Congress for being stuck in the slavery of one family and ignoring the interests of the people.

Why have Congress leaders limited themselves to saving the Gandhi family instead of raising the issues of the people? This is the reason why the party is fast losing ground across the country. They have lost elections and their numbers have reduced in the Lok Sabha and the Rajya Sabha, Thakur said.

He said the National Herald scam was the biggest example of grabbing land worth thousands of crores of rupees.

Despite running a campaign for women's empowerment, Priyanka Gandhi remained silent on the insults directed at the President, who hails from a tribal community. Sonia Gandhi also chose to remain silent, the I&B minister said.

And now to hide their own acts of corruption, they were encouraging Congress workers to stall the investigation, he said.