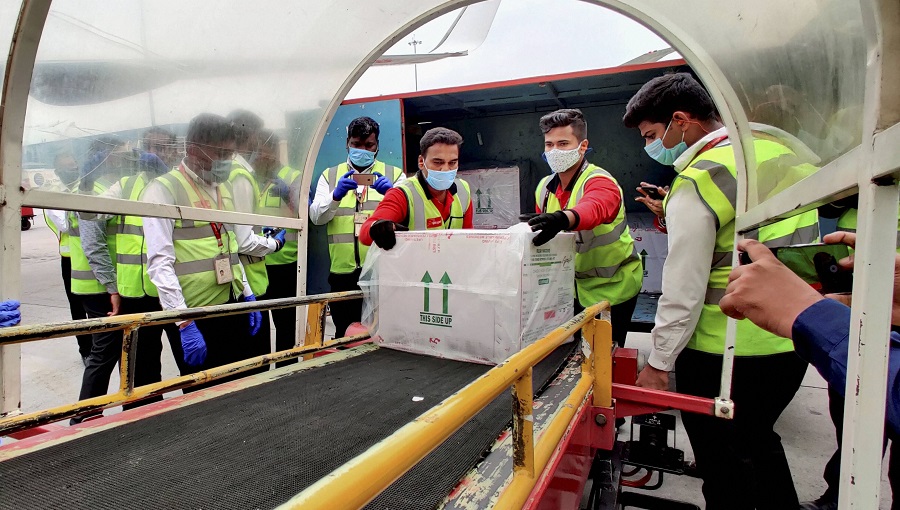 The Centre said 54.72 lakh Covid-19 vaccine doses have been received at designated national and state-level stores till Tuesday afternoon, and all the shots -- 1.1 crore from the Serum Institute of India and 55 lakh from Bharat Biotech -- will be received by January 14.

A massive pan-India inoculation drive against Covid-19 was set in process with Covishield vaccine leaving Pune for 13 cities across India early in the morning, four days before vaccination is scheduled to begin on January 16.

Apart form the 1.1 crore doses of Covishield being procured from the Serum Institute of India, 55 lakh doses of indigenously developed Covaxin were being obtained from Bharat Biotech, Union Health Secretary Rajesh Bhushan said at a press conference.

Bhushan said there are four Central Government Medical Stores Depots at Chennai, Karnal, Kolkata and Mumbai where the Oxford Covid-19 vaccine, Covishield, doses are being received.

Besides this, all states have at least one regional vaccine store. Some big states have multiple stores. Uttar Pradesh has nine such stores, Madhya Pradesh and Gujarat four each, Kerala has three such facilities, Jammu and Kashmir, Karnataka and Rajasthan two each, he said.

"As we speak, 54,72,000 doses have already been received till 4 pm at these vaccine stores, while 100 per cent doses, 1.1 crore from Serum Institute and 55 lakh from Bharat Biotech, will be received by January 14 in all states and Union Territories," the health secretary added.

NITI Aayog member Dr V K Paul, Covishield and Covaxin have been tested on thousands of people. "They are the safest and there is no risk of any significant side effect."

Bhushan said that Zydus Cadila, Russia's Sputnik V, Biological E and Gennova are the other vaccines which are in advanced stages of clinical trials in India.

"In the coming days some of these vaccines too may be approaching the drug controller for emergency use authorisation. There will be sequential roll-out of COVID-19 vaccination.

Giving a scenario of the price of vaccines available round the world, Bhushan said each dose of the vaccine developed by Pfizer-BioNTech costs Rs 1,431 per dose, Moderna Rs 2,348 to Rs 2,715, Sinovac Rs 1,027, Novavax Rs 1,114, Sputnik V less than Rs 734 and the one developed by Johnson and Johnson at Rs 734.

About the effectiveness of the vaccines, Bhushan said those can be observed only after 14 days. "So we urge people to keep following COVID-appropriate behaviour."

The health secretary said the five key principles for anti-coronavirus vaccination are to ensure people's participation, utilise the experience of elections and universal immunisation programme, making no compromise on scientific and regulatory norms and neither on existing healthcare services.

Noting that the COVID-19 situation is worrisome around the world, he said even though daily new cases are declining in India, there should not be any laxity in following COVID-appropriate behaviour.