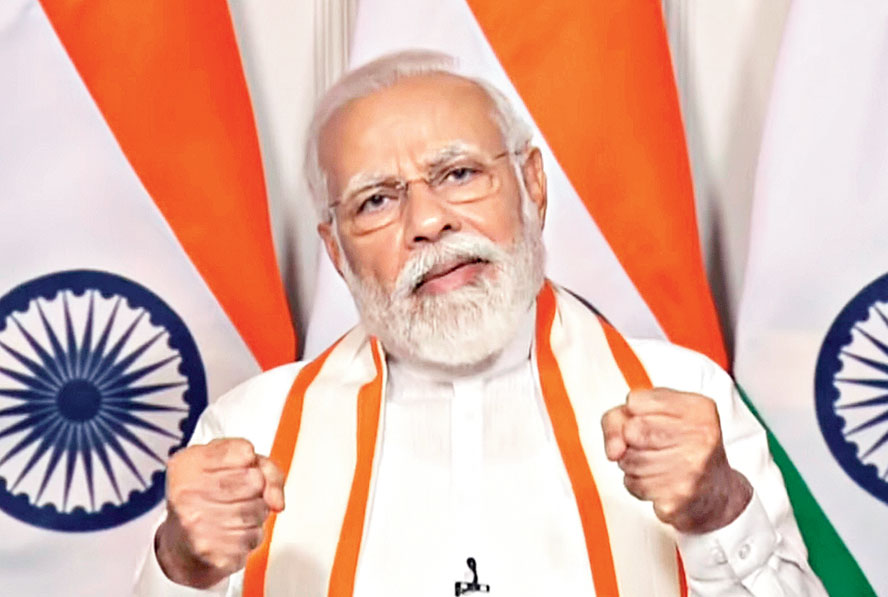 Prime Minister Narendra Modi continues to live in a bubble of his own making.

On Tuesday, Modi sent out another feisty message to Indian industry, promising structural reforms and urging business barons to plug into his dream of creating a self-reliant India — an Atmanirbhar Bharat — while choosing to gloss over the shock of Monday’s sovereign credit downgrade by Moody’s Investors Service.

Moody’s had downgraded India’s long-term credit rating to Baa3 — the lowest investment grade in its rating scale. The highest grade is Aaa.

The Prime Minister also did not comment on the dire forecasts of a contraction of the Indian economy this fiscal by a scrum of pundits, including Reserve Bank of India governor Shaktikanta Das.

“We will get our growth back. India will get its growth back,” the Prime Minister said in a video-linked message to the 125th annual session of the Confederation of Indian Industry.

“Take a vow to make India atmanirbhar,” he added. “The government is standing with you; you need to stand with the goals of the country.”

“The Indian industries have a clear path (before them) — the way to an Atmanirbhar Bharat; the path of self-reliant India. Self-reliant India means we will become stronger and embrace the world,” Modi said.

It wasn’t immediately clear how the business shoguns reacted to another rallying cry designed to whip up nationalistic fervour in corporate boardrooms.

Last month, the Modi government announced a Rs 20.97 lakh crore stimulus package that promised big-ticket reforms but hugely disappointed industry since it did not back it up with a credible plan to stoke demand in an economy that has ground to a halt after a prolonged, pandemic-induced lockdown.

Modi’s talk of growth rang hollow as he refused to address the barrage of criticism that his government has been facing for its ham-handed approach to reignite the faltering economy.

Several economists and analysts have already suggested that India will see growth shrink by 3 to 5 per cent. Last Thursday, rating agency Standard and Poor’s said India’s economic growth would contract 5 per cent this fiscal as the country transitions to a post-Covid-19 world.

On Monday, Moody’s expressed little confidence in the country’s policy-making institutions’ ability to “mitigate the risks of a sustained period of relatively low growth, significant deterioration in the general government fiscal position and stress in the financial sector”.

On Tuesday, the US-based credit rating agency went a step further and downgraded the deposit ratings of four banks, including State Bank of India and HDFC Bank, the largest lender in the private sector, as well as seven infrastructure companies.

It cut the ratings of eight non-financial companies, including TCS, Infosys, ONGC and Indian Oil Corporation. It, however, reaffirmed Reliance Industries Ltd’s long-term rating at Baa2 — a notch above the sovereign’s — but revised the outlook to negative from stable. RIL is India’s largest private conglomerate.

Instead of rebutting those criticism, the Prime Minister stuck to his patter.

“We have taken tough steps to fight the pandemic; we have also taken care of the economy…. We have to save the lives of citizens while also stabilising the economy and speed up growth,” he said.

His solution was simple.

“We have to invest in the robust local supply chains that can strengthen India’s participation in the global supply chain. There is a need to create products that are Made in India and Made for the World,” he said.

“To get back on the growth path, the country needs to focus on 5 Is (coining a new buzzword) — intent, inclusion, investment, infrastructure and innovation,” he said.

Modi spoke glowingly of the plans to free farmers from the tyranny of the mandis (wholesale markets), throw open agri-business opportunities for the corporate sector, reserve government contracts up to Rs 200 crore for small and medium businesses, shovel funds into the stressed sectors, permit commercial mining and introduce labour reforms in order to increase employment opportunities.

“Reform for us is not a random or scattered decision. It is a systematic, planned, integrated, interconnected futuristic process. Reform for us is daring to take decisions and take them to logical conclusions,” he said.

The Prime Minister’s gung-ho optimism about a distant future provides little comfort to banks that have been sitting on a pile of cash and remain reluctant to lend because of the fear of ramping up their stack of pre-existing bad loans. Equally, industry has shown no appetite for new investments when all their energies are focused on marshalling resources to deal with the Covid-19 crisis.

“The Covid-19 outbreak and resulting lockdown has impacted adversely the real economy, businesses, individuals, government and the financial sector. While the government is facing the risk of a higher fiscal deficit, the banking sector urgently needs recapitalisation to the tune of Rs 3-4 lakh crore to meet its lending requirements,” said Uday Kotak, incoming president of CII.

The CEOs emphasised the need to bridge between policy articulation and implementation. “We need to move faster on implementation by strengthening institutions, invest in brand building and address growth,” said Ajay Piramal, chairman of the Piramal Group.

He expressed fear that “if the growth is not brought back urgently then social issues may come up”.

He added that the concept of Atmanirbhar Bharat was good but it had to be aggressively promoted like the Swachh Bharat Abhiyan.

“To revive the manufacturing sector in India, we need to put in place more enablers as only quality infrastructure can help create world-class manufacturing,” Rajnish Kumar, chairman of State Bank of India, said.

For the record, the National Statistical Office (NSO) reported last Friday that growth in gross value added in the manufacturing sector contracted by 1.4 per cent in the fourth quarter of 2019-20 (January-March) against a 2.1 per cent expansion a year ago.

Worse, the country’s economic growth tumbled to a 12-year low of 4.2 per cent in 2019-20 — and the prospect of a severe contraction looms this year.