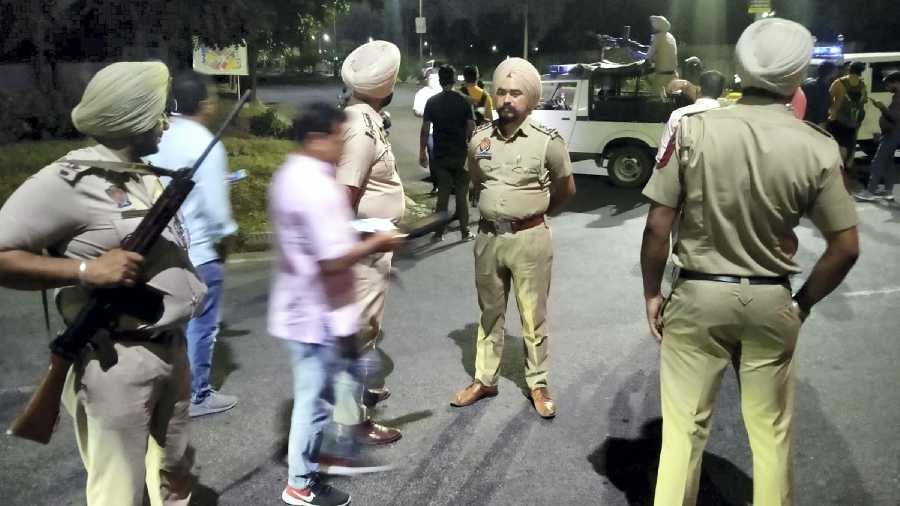 Police personnel cordon off the area after a blast outside the Punjab Polices intelligence department office in Mohali
PTI picture
Our Bureau, PTI   |   Chandigarh   |   Published 13.05.22, 06:16 PM

The Punjab Police has arrested five people in connection with the RPG attack at its Mohali office and pointed at the nexus of militant outfit Babbar Khalsa International and Pakistan's spy agency ISI.

Addressing a press conference here on Friday, Director General of Police V K Bhawra said a sixth accused is in police custody in a separate case.

The plot behind the incident has been traced and a nexus between militant outfit Babbar Khalsa International and gangsters at the behest of Pakistan's ISI has come to the fore, he said.

Rinda is believed to be in Pakistan.

Bhawra said the five arrested include those who provided shelter, logistic support and the weapon to those who carried out the explosion.

The three people involved in firing the rocket-propelled grenade (RPG) are still wanted, he said.

The DGP said Tarn Taran resident Nishan Singh, an accused in the case, is already under the custody of the Faridkot police in some other case. He will be arrested in this case too, he said.

Nishan Singh is facing several criminal cases, including one related to attempt to murder and another under the Narcotic Drugs and Psychotropic Substances Act.

In an audacious attack on Monday, a rocket-propelled grenade was fired at the state police's intelligence wing headquarters in Mohali's Sector 77.

Windowpanes on one of the floors of the building were shattered because of the explosion. No one was injured in the incident.