The Supreme Court was “shocked” to discover on Thursday evening that the Centre’s e-governance spearhead had appended to all the court’s outgoing emails a picture of Prime Minister Narendra Modi and his “sabka saath” slogan, court sources said.

After the matter came to the attention of Chief Justice N.V. Ramana, who is also the top court’s administrative head, the National Informatics Centre (NIC) was told to remove Modi's image and the slogan immediately and all its senior officials were pulled up, the sources added.

“It complied within an hour of the directive being issued on Friday morning,” one of the sources told The Telegraph.

The source added: “The National Informatics Centre, which provides the email services to the apex court, was directed to drop that image from the footer of the emails originating from the Supreme Court. It was also asked to use the picture of the Supreme Court of India, instead.”

“The NIC has since complied with the directions of the SCI,” said the source.

Other sources said Justice Ramana had sought a report on the issue so that appropriate action could be taken.

The NIC, which operates under the ministry of electronics and information technology, manages the Supreme Court’s official website and almost all its digital networking infrastructure.

The sources said some people had alerted the apex court registry that, over the past couple of days, all the court’s outgoing mails were displaying Modi’s picture and the slogan “Sabka saath, sabka vikas, sabka vishwas, sabka prayas (Together with all, development of all, trust of all and effort by all)”.

“Fortunately, we came to know within two or three days that our mails were carrying the slogans and the photograph of the Prime Minister. We immediately directed the NIC to delete all such endorsements and advertisements from our emails,” a source said.

The sources said the display of political slogans or images of public figures on Supreme Court mails was unacceptable as it would send out an erroneous message that the top court endorsed the ruling party's political manifesto or agenda. 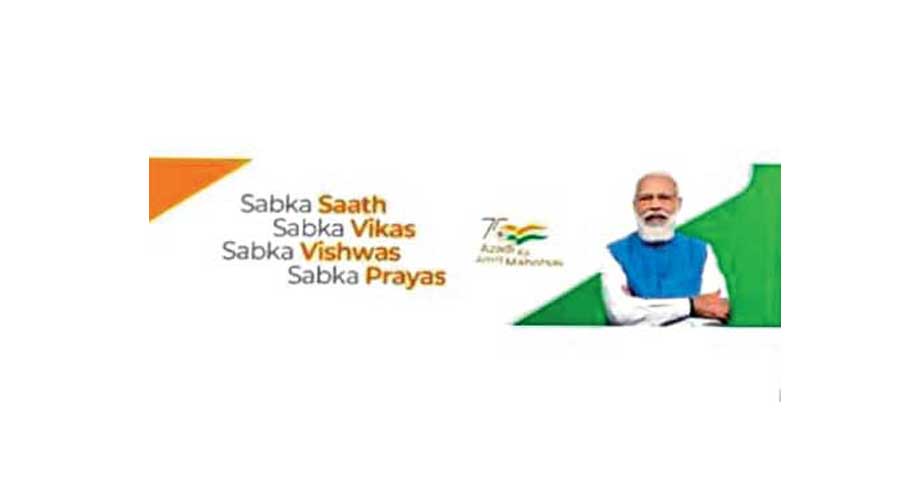 Besides, it would damage perceptions about the judiciary's independence from the central government, which is the biggest litigant before the top court, they said.

An official said the NIC was earlier allowed to display certain messages of public interest, for example those relating to social distancing and other Covid-19 protocols, on apex court emails.

It had previously used the "Swachh Bharat" slogan with the portrait of Mahatma Gandhi in the background, and also a slogan urging polio vaccination.

All these were accompanied with a visual of the Supreme Court building in the background. However, this visual was missing from the mails carrying the "sabka saath" slogan and the Prime Minister's photograph.

The government's penchant for using Modi's picture on official documents appears to have already earned it ridicule abroad. According to media reports, Modi's photo on Covid vaccination certificates had caused merriment at foreign airports after baffled immigration officers initially accused Indian travellers of fraud because the faces didn't match.

The NIC was established in 1976 to provide technology-driven solutions to central and state governments in various fields.