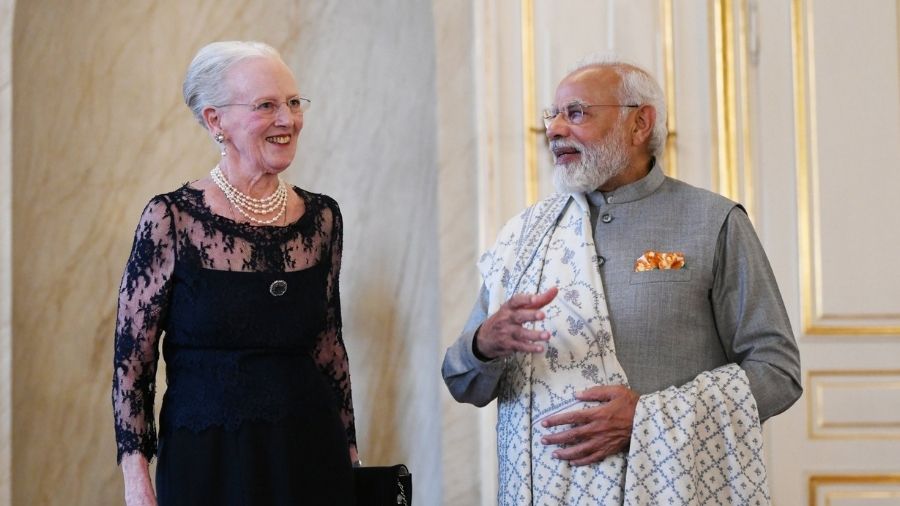 Prime Minister Narendra Modi with Queen of the Kingdom of Denmark, Margrethe II
Twitter/@narendramodi
Our Bureau And PTI   |   Copenhagen   |   Published 04.05.22, 08:30 AM

Prime Minister Modi felicitated the Queen on the occasion of the Golden Jubilee of her reign, Ministry of External Affairs (MEA) spokesperson Arindam Bagchi said on Twitter.

The 82-year-old Queen has been Denmark's reigning monarch since 1972. The Danish monarchy is one of the oldest in the world.

Her Majesty, the Queen of the Kingdom of Denmark, Margrethe II extended a warm reception to PM @narendramodi. Prime Minister felicitated Her Majesty on the occasion of the Golden Jubilee of her reign, Bagchi said in a tweet.

Her Majesty, the Queen of the Kingdom of Denmark, Margrethe II extended a warm reception to PM @narendramodi.

Prime Minister felicitated Her Majesty on the occasion of the Golden Jubilee of her reign. pic.twitter.com/7DGqMz0n2j

The Royal House Kongehuset, in a statement issued on April 27, said that after the Queen receives Prime Minister Modi in audience, Her Majesty will host an official dinner afterwards in Christian VII's Palace at Amalienborg. The Crown Prince Couple will be present at both the reception and the dinner.

It will be the first time in 20 years that an Indian prime minister has made an official visit to Denmark, the Royal House added.

Modi, who arrived here from Germany on the second leg of his three-nation Europe trip, was welcomed by Frederiksen upon his arrival at Marienborg - the official residence of the Prime Minister of Denmark - for talks. As a special gesture, Frederiksen earlier received Modi at the airport.

"The two Prime Ministers held extensive discussions on the full range of bilateral cooperation as also on matters of regional and global interests," Kwatra told reporters while briefing about the meeting.

He said a Letter of Intent was signed on smart water management, on green shipping, and an announcement was also made about the launch of ministerial energy dialogue between the two countries. "These three outcomes would strengthen the Green Strategic Partnership between our two countries," he added.

The two leaders also expressed their commitment to expedite the discussion and conclusion of the India-EU Free Trade Agreement.

There were also discussions on bilateral cooperation in the Arctic region, he said, adding that an important outcome was a joint declaration of intent on migration and mobility that would further strengthen our cooperation, including through expansion in trade and services.

Both the Prime Ministers reviewed progress of the India-Denmark Green Strategic Partnership, the Ministry of External Affairs (MEA) said in a press release.

Both leaders lauded the expanding people-to-people ties between the two countries, it added.

Frederiksen gave a tour of her official residence to Modi and showed the painting he gifted her during her last India visit. It is a Pattachitra painting from Odisha.

Pattachitra style of painting is one of the oldest and most popular art forms of Odisha. It is the state's traditional art form.

It is Prime Minister Modi's first visit to Denmark.

Ahead of his visit, Modi had said that his visit will "provide an opportunity to review the progress in our unique Green Strategic Partnership' with Denmark, as well as other aspects of our bilateral relations.

India-Denmark: A Green Strategic Partnership' was established during a virtual summit in September 2020. This partnership was translated into a result-oriented five-year action plan during Frederiksen's India visit in October 2021.

Modi also attended the India-Denmark Business Roundtable and interacted with the Indian community in Denmark on Tuesday.

More than 60 Indian companies in Denmark, mainly in the IT sector, are further cementing bilateral business-to-business ties.

Denmark is home to a robust Indian diaspora of 16,000 people.

Later in the evening, Modi met Queen Margrethe II of Denmark and felicitated her on the occasion of the Golden Jubilee of her reign.

"The Summit will focus on subjects like post-pandemic economic recovery, climate change, innovation and technology, renewable energy, the evolving global security scenario and India-Nordic cooperation in the Arctic region," Modi had said.

The summit will focus on economic engagement, green partnership and mobility and cooperation in the Arctic region.

On the sidelines of the Summit, Modi will also meet the leaders of the other four Nordic countries and review the progress in bilateral ties with them.

Responding to a question, Kwatra said the India-Nordic summit focusses on the elements of bilateral cooperation which essentially fall in three to four major clusters - trade and investment ties; the digital and innovation partnership; the green partnership; and other areas of economic cooperation.

On a question on Kim Davy - the prime accused in the Purulia arms drop case, he said it's an issue which is a subject matter of legal process between the two countries and those processes are currently underway. "It would be incorrect for me to make any comments with regard to those processes," he said.

The case relates to the dropping of arms and ammunition by an AN-26 aircraft in West Bengal's Purulia district on the night of December 17, 1995.