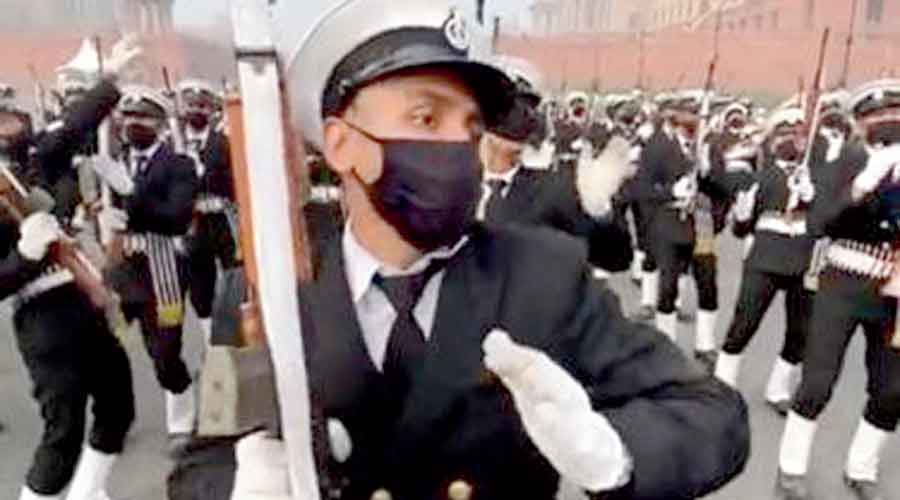 Screenshot from the video on MyGovIndia shows Indian naval personnel dancing to the Bollywood song during the Republic Day parade rehearsals.
The Telegraph
Imran Ahmed Siddiqui   |   New Delhi   |   Published 23.01.22, 01:57 AM

The Narendra Modi government has dropped the Christian hymn Abide With Me, known to be a favourite with Mahatma Gandhi, from the Beating Retreat ceremony this year.

The controversial move comes at a time a video tweeted from the government handle, MyGovIndia, has shown Indian naval personnel dancing to a Bollywood song during the Republic Day parade rehearsals.

What a sight! This video will definitely give you goosebumps!

Are you ready to witness the grand 73rd Republic Day celebrations with us? Register now and book you e-Seat today! https://t.co/kJFkcXoR2K @DefenceMinIndia @AmritMahotsav pic.twitter.com/3WZG30DWQ0

The chorus Monica, O My Darling could be heard. The band plays a song from Once Upon a Time in Mumbai (2010) that mixes two songs of R.D. Burman — Duniya mein logon ko from Apna Desh and Piya tu ab toh aaja from Caravan.

Defence ministry sources could not confirm whether the film song would be part of the Republic Day parade.

Abide With Me has been played every year since 1950 at the annual Beating Retreat ceremony at Vijay Chowk on the evening of January 29, marking the end of the nearly weeklong Republic Day celebrations.

But an official list of the 26 tunes to be played at the ceremony this year, released on Saturday, does not mention Abide With Me.

The snub to the hymn comes a day after the government erased another emotive heritage of the republic that symbolised its military’s sacrifices. It controversially extinguished the “eternal flame” at the Amar Jawan Jyoti at India Gate, “merging” it with the flame at the National War Memorial built by the Modi government around 400 metres away.

A defence ministry official said Mahatma Gandhi’s love for Abide With Me was the reason it had been included in the ceremony in 1950.

An official at army headquarters told The Telegraph: “It’s a shocker that the hymn has been dropped. It’s a moving hymn and has nothing to do with any particular religion. It’s a part of our legacy: through it we remember our fallen soldiers.”

Earlier in 2020, Abide With Me had initially been dropped from the list of tunes to be played at the Beating Retreat ceremony. It was later restored following social media protests that slammed what many users saw as a “non-inclusive approach”.

Gopal Krishna Gandhi, the Mahatma’s grandson, had expressed pain in January 2020 when the government initially planned to drop Abide With Me.

“Who does the verse affront? What does it offend? Has anyone been, can anything be, hurt by a song that is about the healing of hurt?” he had written.

“I don’t believe the authorities can be so impervious to the song’s aesthetic, spiritual and human appeal, so insensitive too to the feelings of those who love the hymn. Gandhi loved it.”

Defence ministry sources said the Beating Retreat was a centuries-old military tradition, going back to the days when troops disengaged from battle at sunset. As the buglers sounded the retreat, soldiers stopped fighting, sheathed their arms and withdrew from the battlefield.

The hymn was written by Scottish poet Henry Francis Lyte and is most often sung or played to the tune Eventide by William Henry Monk.

Forty-four buglers, 16 trumpeters and 75 drummers from six bands will perform the Beating Retreat ceremony, with the exit marked by Sarey Jahan Se Achchha.

Military veterans have expressed outrage at a video tweeted from MyGovIndia that shows personnel wearing naval uniforms and holding rifles dancing to a Bollywood number, with the Rashtrapati Bhavan in the background.

“What a sight! This video will definitely give you goosebumps! Are you ready to witness the grand 73rd Republic Day celebrations with us? Register now and book you (sic) e-Seat today!” the text accompanying the video says.

Sharing the video, Colonel (retd) Ajai Shukla tweeted: “This @narendramodi Govt appears to be hell bent on destroying the dignity and sobriety of the three services; and replacing it with some bastardised Bollywood culture. How embarrassing this ‘Navy nautanki’ is! Are the service chiefs going to shut their eyes and acquiesce?”

This ⁦@narendramodi⁩ Govt appears to be hell bent on destroying the dignity and sobriety of the three services; and replacing it with some bastardised Bollywood culture

How embarrassing this “Navy nautanki” is! Are the service chiefs going to shut their eyes and acquiesce? pic.twitter.com/e3CZFgpgkp

Responding to Shukla’s tweet, Lieutenant General (retd) H.S. Panag said: “We seem to have run out of ideas!”