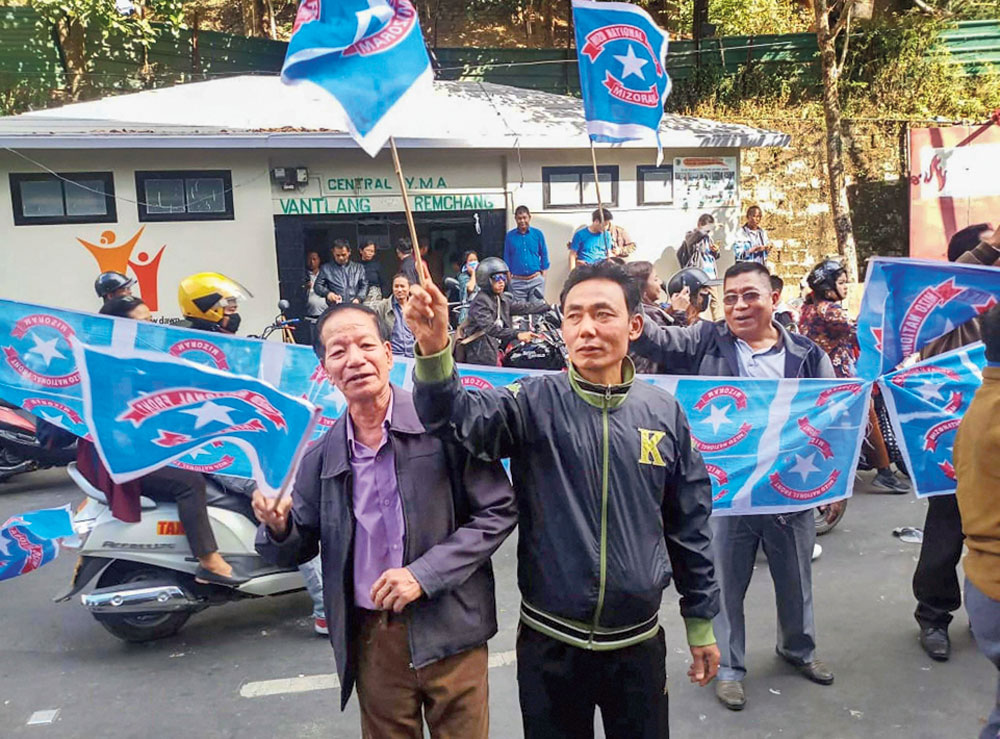 The Congress on Tuesday lost its last bastion in the Northeast with its arch-rival, the Mizo National Front (MNF), sweeping the Mizoram Assembly polls by winning 26 of the 40 seats.

The MNF elected Zoramthanga as the leader of its legislature party and in the evening staked claim to form the government.

He declared that his party would impose total prohibition in Mizoram as promised. Liquor was banned in the state till the then Congress government lifted it in 2015. The Church in the Christian-majority state, where many people have died because of liquor consumption, favours prohibition.

The Congress, which had been in power since 2008 and bagged 34 seats in the last Assembly elections in 2013, secured only five this time. The Zoram People’s Movement (ZPM), an alliance of six parties, won eight seats, while the BJP opened its account for the first time by winning in the Chakma-dominated Tuichawng.

Lal Thanhawla, 80, who became chief minister for the fifth time after the 2013 Assembly polls, submitted his resignation to governor Kummanam Rajasekharan in the evening.

Zoramthanga made a comeback after losing two consecutive Assembly polls in 2008 and 2013. He defeated his nearest opponent, K. Sapdanga of the ZPM, by a margin of 2,504 votes at Aizawl East-I.

The BJP, which has contested Assembly elections in Mizoram five times since 1993, opened its account this time. MLA Buddha Dhan Chakma, who quit the Congress and joined the BJP, defeated his nearest opponent, the MNF’s Rashik Mohan Chakma, by 1,594 votes.

Among the five Congress legislators and ministers who had resigned and joined other parties, former home minister R. Lalzirliana and Lalrinliana Sailo won from Tawi and Chalfilh, respectively, on MNF tickets.

None of the 18 woman candidates won. The outgoing government had just one woman minister, Vanlalawmpuii Chawngthu, who lost.

Zoramthanga expressed happiness at the victory: “Even though the figure was not up to the mark, as we had expected between 25 and 30 seats, we are satisfied with the result.”

He said anti-incumbency, the liquor law, bad roads and the MNF’s socio-economic development policy were the factors that helped his party win the Assembly polls.

Accepting defeat, Lal Thanhawla said anti-incumbency and the liquor law led to the Congress defeat. He attributed the loss not to bad performance but “the desire of the people to test a new government”.