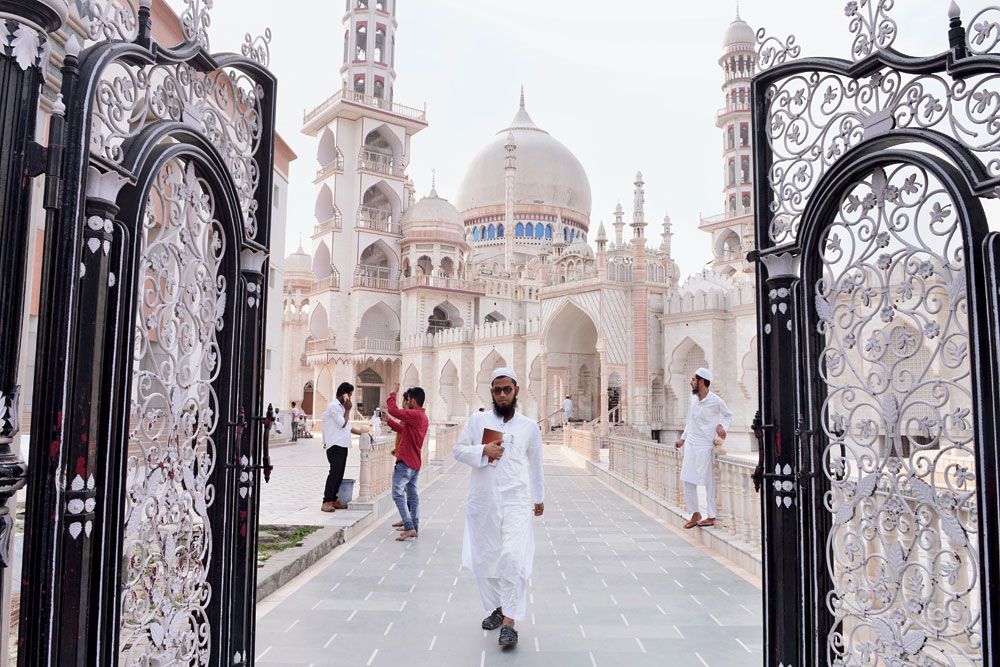 Ashraf Qasmi, a garment trader in Deoband, around 176km north of Delhi, is trying to undo what he believes is the Opposition’s failure to mount a strong and single challenger to the BJP’s Raghav Lakhanpal, the sitting MP of the Lok Sabha constituency, Saharanpur.

Sitting next to his shop opposite Darul Uloom, the country’s oldest Islamic seminary, Qasmi spoke to some local Muslim and Dalit youths and asked them to spread his message to all voters: Don’t make the same mistake as 2014.

An estimated 16 lakh voters of Saharanpur in western Uttar Pradesh are witnessing a three-cornered fight with the Congress repeating 2014’s Imran Masood and the BSP-SP-RLD Mahagathbandhan fielding Fazlur Rahman.

Qasmi’s message to the youths is simple: “Can we afford to have two candidates against Lakhanpalji? No. Please tell this to everyone you know, talk to them, plead with them, send them WhatsApp messages. In the interest of the country and our community, ask them to vote only for Fazlur Rahman, not Imran Masood.”

As a Mahagathbandhan candidate, Rahman is expected to draw support from large sections of Dalits in addition to Muslims. The minority community constitutes around 42 per cent of the constituency’s population. The Dalits make up around 22 per cent, and there are large pockets of Gujjars.

“The Opposition parties have been a disappointment. They talk of fighting Modi together but field two Muslim candidates from the same seat to help BJP win by splitting minority votes,” said Amit, a Dalit. He, along with local Muslim groups in Deoband, have been at the forefront of the campaign to ensure there is no split in votes.

He said Dalits and Muslims have joined hands in asking people to vote tactically. “Our survival is at stake. Muslims and Dalits have suffered a lot under the Modi government and this time the two communities have joined hands to throw out BJP from western Uttar Pradesh. It is possible only if there is tactical voting,” Amit said, emphasising that his leader Mayawati also warned Muslims in the first Mahagathbandhan rally against division of their votes.

Many residents of the area spoke about the meaninglessness of violence and highlighted development as the agenda for the polls.

The worst memories of the communal riot of September 2013 in nearby Muzaffarnagar in the run-up to the 2014 parliamentary polls seemed to have faded and the dominant Jats recalled old days of co-existence between the majority and minority communities. Development, unemployment and agrarian issues, jobs, health facilities dominated conversations.

“In the last Lok Sabha election, the BJP won all eight seats in western UP because of extreme polarisation in the wake of the riots but things are different this time. Farmers are very unhappy with the Modi government’s unfulfilled promises. Demonetisation made lives miserable for small traders and many of us had to shut shop,” said Mange Ram, who belongs to the Saini caste.

Muslims account for 20 to 49 per cent of the electorate in the eight seats of western UP that vote on Thursday. The Congress has fielded candidates in six of these seats.

“The Modi wave is missing in this election,” said Rakesh Shama, an IIT student from Roorkee (Saharanpur campus). “The country’s employment crisis has deepened and educated youths are struggling to find jobs. Farmers are in distress. There is uncertainty everywhere. The poor are the worst sufferers.”

The BJP’s formula in UP revolves around Narendra Modi, mobilisation of OBCs, especially the non-dominant castes such as Kashyap and Saini, a division in minority votes and a pitch for a muscular India. In Saharanpur, the BJP is pinning hopes on a split in the Muslim votes.

“Modiji is doing a lot for the country and we need to give him another chance. Other parties are only concerned about Muslims,” said Rahul Sharma, a Brahmin landowner.

Sarwan, who works on Sharma’s agriculture field, nodded in agreement. “Last month I got Rs 2,000 as part of PM-Kisan (scheme). I will vote for Modiji,” said Sarwan, who belongs to the Kashyap caste.

The BJP is banking on its traditional votes of Brahmins, Thakurs, a section of Gujjars, and non-Yadav backward castes such as Kashyaps and Sainis.

“This election is only about Modiji. We are sure to get all our traditional votes. All we need is a split in Muslim votes to sail through,” said Roshanlal Singh, in charge of the campaign team for Lakhanpal.

Local BJP leaders said RSS cadres and volunteers have been campaigning door to door across western UP, helping the BJP reconnect with its traditional voters.

Local Muslims believe if there is no tactical voting, the Congress may end up eating into the minority votes. In some pockets of Saharanpur, Muslims seemed unsure which candidate can defeat the BJP.

The Darul Uloom, which has considerable influence among Muslims in Uttar Pradesh, has not made any public announcement of support to any political party.

“Ours is an educational institution and we have nothing to do with politics,” said a teacher at the 152-year-old seminary. “Both Hindus and Muslims should vote for secular parties to protect the idea of India.”