Mayawati-Akhilesh alliance is strong, but so is Prime Minister's brand of muscular nationalism 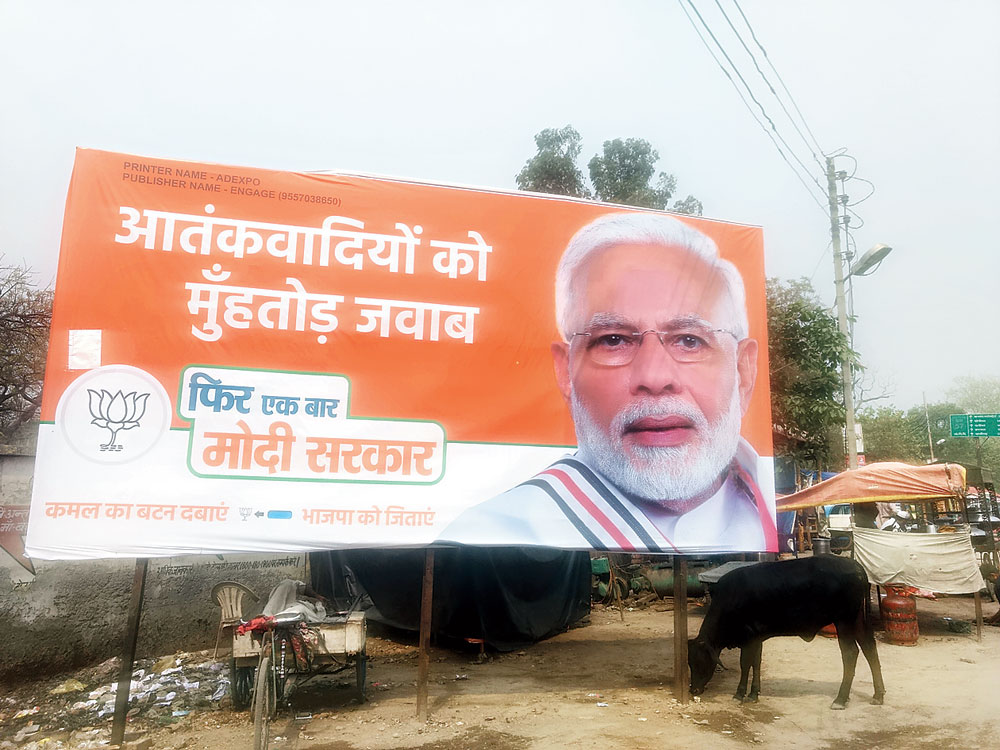 Alam, glued to the TV set at Sharma’s Rama Hotel, a small eatery in Baraut market, had been listening to the live telecast of Mayawati’s speech in Saharanpur, western Uttar Pradesh.

He clapped the moment the Bahujan Samaj Party chief said the “gathbandhan” — the alliance she has formed — would oust not only the Narendra Modi government at the Centre but also the Yogi Adityanath government from Uttar Pradesh.

“The ‘gathbandhan’ is going strong. It will defeat the BJP in most seats in this region,” Alam said.

Sharma laughed. “Take it from me, even Jayant Chaudhary will lose here (Baghpat),” the young hotel owner, who identifies himself as a “pandit” (Brahmin), said. “Everyone wants Modi again.”

The battle lines appear sharp in the Baghpat Lok Sabha seat and across other western Uttar Pradesh constituencies that vote on April 11, when the seven-phase general election gets under way.

The voters seem divided between the “gathbandhan” — the popular word for the BSP-Samajwadi Party- Rashtriya Lok Dal alliance — and Modi or “phul” (the BJP’s lotus symbol).

The “gathbandhan” nominee from Baghpat is the RLD’s Jayant, grandson of former Prime Minister and farmer leader Charan Singh, still a revered name here nearly 32 years after his death.

Jayant and his father Ajit Singh claim leadership of the agrarian Jat community that has a substantial presence in many seats in western Uttar Pradesh.

Father and son had both lost the 2014 polls and this time are banking on alliance partners BSP and Akhilesh Yadav’s SP to see them through.

The BJP’s nominee is Union minister Satyapal Singh, also a Jat, who had defeated Ajit in Baghpat with a huge margin in 2014.

Jayant had lost in Mathura to the BJP’s Hema Malini.

Satyapal, a former police commissioner of Mumbai, is again banking on the Modi factor to help him past the gathbandhan’s formidable caste arithmetic in this straight contest. The Congress has not fielded any candidate here.

The Jats, who are mostly rooting for Jayant, feel Charan Singh’s grandson will win but at the same time say “ladai tagda hai” (the contest is stiff) and the margin of victory would be slender.

The reason is the division among the Jats, propelled by the Modi chemistry and the narrative of a muscular nationalism that the BJP has been harping on.

As one enters Baghpat and travels through the Jat-dominated Baraut and Chhaprauli segments, the division strengthens in favour of Jayant but it exists. It starts from 60:40 (RLD:BJP) and reaches 80:20.

The Jats accuse Modi of betraying promises made to farmers, point towards mounting sugarcane dues from mills, high electricity and fertiliser prices and — the biggest one — the menace of stray cattle.

But a worrying factor for Jayant is that the Jats, despite rooting for the gathbandhan and holding Modi responsible for their woes, want to see him as the Prime Minister again.

“We are supporting Jayant and he will win too but Modi only will become the Prime Minister,” said Pradip Maan, playing cards with other villagers in Sadikpur-Sinauli. “Who else is there?”

A “khichdi” (a pejorative term for a coalition) government, he added, will not be good for the country.

He and other Jats also highlighted what they called the growing threat of terrorism and referred to the Balakot air strikes to justify their preference for Modi.

The Congress and other Opposition parties, they said, have been soft towards Pakistan-sponsored terrorism.

The BJP is banking on Jats being ideologically closer to the saffron party, hoping the Modi chemistry would corrode the gathbandhan’s caste arithmetic and see it through with a thin margin.

The Jats have traditionally been anti-Congress and, in the past, have swayed towards the BJP.

A section of Jats, most of them young voters, have taken to the BJP’s muscular brand of nationalism, swayed also by communal passions.

“There is no water in the RLD’s hand pump. The country needs Modi. He only can give a fitting reply to Pakistani terrorists,” said Gautam Singh, a first-time voter.

Other castes, particularly the minor backwards or Other Backward Classes, appeared to be tilted towards Modi and the BJP. Minor OBCs like the Saini, Kashyap, Dhimar and Jogi, who make up nearly 23 per cent of the electorate, said they preferred Modi as Prime Minister.

They had turned towards the BJP in 2014 and it appears they are sticking with the party.

While the Muslims and a large section of the Dalit Jatavs, who are firm supporters of Mayawati and the BSP, are certain to back Jayant, the possibility of a sizeable division among Jat voters, though unlikely, keeps alive the prospect of a surprise result.

Sharaab? Then it’s OK to slur your speech