Migrants in river-mouth battle for farmland 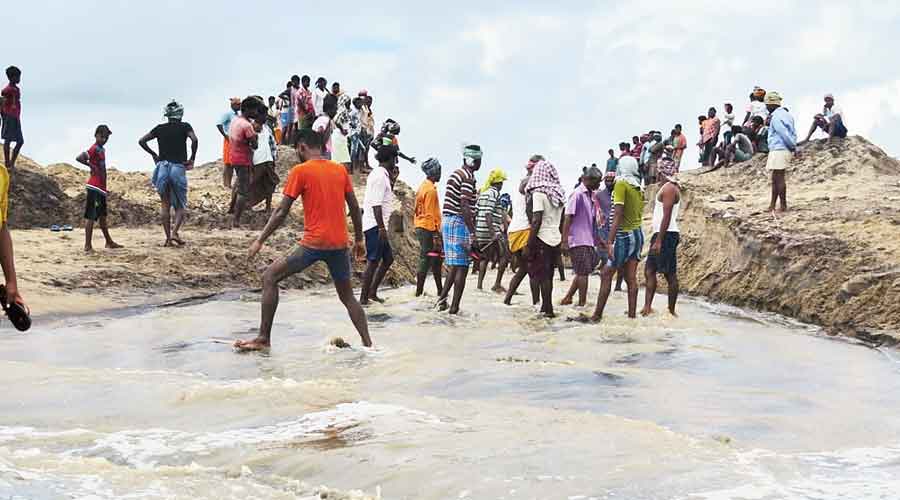 More than a hundred migrant labourers, who had returned to Odisha during the lockdown, joined hands with fellow villagers from around six villages of Ganjam to dig up 200 metres of the Rushikulya river mouth to drain out the water inundating agriculture land following torrential rains recently the influence of a low pressure system in the Bay of Bengal.

Rushikulya flows through southern Odisha districts like Ganjam for the major part of its course.

Residents of villages like Puranabandha, Paliabandha, Sanagaon, Badagaon, Potagarh and Nuagoan under Ganjam block were struggling to drain out the water accumulated in their fields following heavy rains in the past two weeks as the river mouth, nearly 2km from their area, had become choked with silt.

“With no outlet for release of the excess water, flooding had become commonplace in our area. Though we had lodged a complaint with the district administration to desilt the river mouth, there was no action taken. So we decided to dig up a new river mouth to discharge the rainwater ourselves,” said Rabindra Sahu of Purunabandha.

He said the migrant labourers who returned to the village during the lockdown extended a helping hand. “This motivated us to step up our efforts,” he added.

The new river mouth was dug up last Thursday. “But we have started digging it again as it got filled with sand once more. So far we have spent Rs 4 lakh on the work. A major part of the money has been spent on hiring a JCB machine. We generally keep some money for emergency because we may get into trouble in the sea at any time during fishing. When we go out to the sea, we ensure that our emergency funds are safe. Now the funds have come in handy and helped us carry out the digging work. The migrant labourers have done their bit for us,” said Balraju of Sanagaon.

“Thankfully, we have succeeded in opening the river mouth and the water is now being discharged to the sea. Now there is no back flow of water,” said Ganesh Behera, a migrant labourer who had returned to the state in the second week of May along with 30 others from Chennai by hiring a bus. Each one of them had paid Rs 5,000 for the journey.

Behera said, “When we noticed the plight of the villagers we thought of helping them. But we had no money to help them as our income had dried up. There is no work available for us. So when the elders of the affected villages came up with an idea of digging up a new mouth of the river, we put out a message on our WhatsApp group seeking support from all our friends. All of us reached the site and helped the villagers to dig up the new mouth. It was a huge task.”

He said that the old river mouth had not been de-silted for several years.

“Dumping of waste had also choked it, obstructing the release of water from the river into the sea. But now excess water is being easily drained out to the sea through the new mouth. We face no crisis despite continuing rains,” Behera said.

The other advantage of digging up a new river mouth is that the fish now have a free channel to enter the Rushikulya from the sea. “We expect a good catch once the rains subside. There is now free movement of inland and marine fish and crab,” said Rabi Behera.

Ganjam collector Vijay Amruta Kulange told The Telegraph, “ I have sought a report on the development from the sub-collector. Change in the course of the river is a natural phenomenon when it happens due to siltation. Even a cyclone sometimes changes the course of a river following heavy rain. The area comes under a highly eco-sensitive zone. We will seek expert opinion on the new mouth.”