Searches began at 3:30 am involving a total of 300 NIA officials 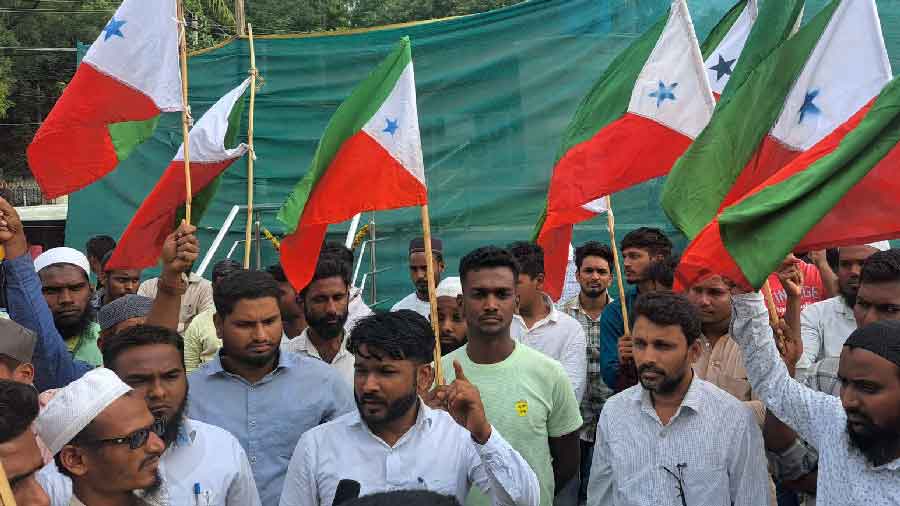 In a massive crackdown on the Popular Front of India (PFI), multi-agency teams spearheaded by the NIA arrested 106 leaders and activists of the radical Islamic outfit on Thursday in near simultaneous raids in 15 states for allegedly supporting terror activities in the country, officials said.

Kerala, where the PFI has some strong pockets, accounted for the maximum number of 22 arrests with its chairman O M A Salam among those picked up, officials said, adding the countrywide arrests were a result of a "largest ever" investigation process against the outfit "till date".

The raids began at 3:30 am and involved a total of 300 NIA officials from its various offices across the country, they added.

The raids sparked an angry response from the PFI which called for a dawn-to-dusk hartal in Kerala on Friday and termed the arrest of its leaders as a part of "state-sponsored terrorism".

Following the mega crackdown, the PFI stares at a possible countrywide ban.

The PFI, formed in 2006, claims to strive for a neo-social movement ostensibly for the empowerment of marginalised sections of India, and is often accused by law enforcement agencies of promoting radical Islam.

During the searches, officials said incriminating documents and sharp edged weapons were found and a large number of digital devices also seized.

The offices of the top brass of the PFI and members were searched in connection with five cases registered by the NIA following continued inputs and evidence against the leaders and cadres for their alleged involvement in funding of terrorism and terrorist activities, organising training camps for providing armed training and radicalising people to join banned organisations, they said.

The 106 arrests were made separately by agencies involved in the operation, with the NIA alone accounting for 45 of them as part of probe in five cases. As on date, the NIA is investigating a total of 19 cases involving the PFI.

As many as 19 accused were arrested by the NIA from Kerala, 11 from Tamil Nadu, 7 from Karnataka, 4 from AP, 2 from Rajasthan, and 1 each from UP and Telangana, the agency said in a statement.

Officials said criminal and violent acts allegedly carried out by the PFI over a period of time -- such as the chopping off the hand of a college professor in Kerala in 2010, cold-blooded killings of people linked with organisations espousing other faiths, collection of explosives to target prominent people and places, support to Islamic State and destruction of public property -- have had a demonstrative effect of striking terror in the minds of the citizens.

As the raids, which began in the early hours of Thursday continued, Union Home Minister Amit Shah held a meeting of top officials, including National Security Advisor Ajit Doval, during which they are believed to have discussed the searches at premises linked to the PFI and action against terror suspects.

The PFI said the raids are taking place at the homes of national, state and local leaders of the outfit and that the state committee office in Kerala is also being raided.

"We strongly protest the fascist regime's moves to use agencies to silence dissenting voices," it said in a statement.

A hartal will be observed in Kerala on September 23 against the "RSS-controlled government's attempt to silence dissenting voices using the central agencies," A Abdul Sathar, PFI's state general secretary, said.

However, the Kerala unit of the BJP termed the proposed hartal as "unnecessary" and urged the state government to take stringent action against those involved in this action.

Alleging that all the previous hartals called by the PFI had ended in riots, BJP state chief K Surendran said the state authorities should be ready to ensure adequate security for people's life and property.

Several Muslim organisations appealed to the youth from the community to remain patient on the action taken by the law enforcement agencies against the PFI.

The organisations said they have faith in the judicial system, law and Constitution of the country, according to a tweet in Hindi by the Muslim Students' Organisation of India (MSO), an apex students and youths body of Muslims working on promotion of Sufism and inclusive India.

Congress leader Rahul Gandhi, who is on a 'Bharat-jodo' yatra, said "all forms of communalism regardless where they come from should be combated."

The ED has been investigating the PFI's alleged "financial links" in connection with charges of fuelling the anti-Citizenship (Amendment) Act protests in the country, the 2020 Delhi riots, alleged conspiracy in Hathras in Uttar Pradesh over alleged gang-rape and death of a Dalit woman, and a few other incidents.

The probe agency has filed two charge sheets against the PFI and its office-bearers before a special PMLA court in Lucknow.

The ATS has registered four offences in Mumbai, Nashik, Aurangabad and Nanded under various Indian Penal Code Sections including 153-A (wantonly giving provocation with intent to cause riots), 121A (conspiring to commit certain offences against the State) and 120B (criminal conspiracy), and provisions of the stringent Unlawful Activities (Prevention) Act (UAPA), he said.

As the offices were being raided, many Muslim youth gathered and raised 'NIA go back' slogans at some places.

They also tried to hinder the raids at some locations, but the police thwarted their attempt by taking them into preventive custody.