Finally, farmers get permission to protest in Delhi’s Burari 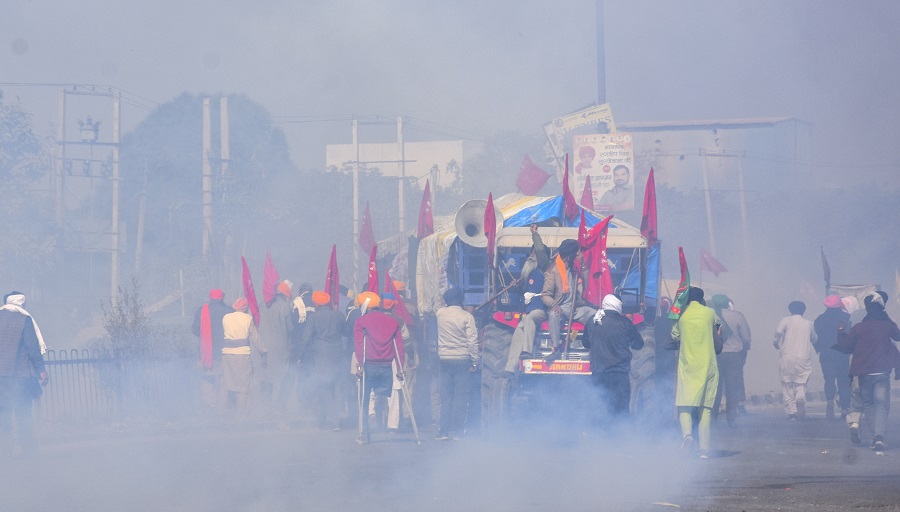 The Centre has allowed farmers to enter Delhi and permitted them to hold their agitation at the Burari ground, claimed Punjab’s agricultural outfits that are protesting against the central farm laws on Friday.

He claimed that Union home ministry officials had permitted them a place in Delhi’s Burari to carry out their agitation.

Confirming the news, Delhi Police PRO Eish Singhal said, "After holding discussion with farmer leaders, the protesting farmers have been permitted inside Delhi to hold peaceful protest at Nirankari Ground in Burari. We appeal to all farmers to maintain peace,"

Bharatiya Kisan Union (Rajewal) president Balbir Singh Rajewal informed that the protesters were on their way to the destination.

At the Tikri border, farmers were escorted by police personnel amid tight security around 3 pm and taken towards the Nirankari Ground, one of the biggest in the city.

But those gathered at the Singhu border, one of the main routes used to access the city from Punjab, had not entered the city till evening.

Earlier, farmers had demanded that they be allowed to hold their protest at the Ramlila ground but the Delhi Police had denied the request.

The Delhi Police has enhanced deployment of security personnel, stationed sand-laden trucks and water cannons and used barbed wire for fencing at the Singhu and Tikri border points (Delhi-Haryana border) to prevent the protesters from entering the city.

Delhi police used tear gas shells in the morning on Friday to disperse a group of farmers who had reached the Singhu border as part of their “Dilli Chalo” march to protest against the Centre's new farm laws, a senior police officer said.

The shells were fired at the border point at Narela which connects Delhi with Haryana.

The might of the State was unleashed to prevent protesting farmers entering Delhi on Friday, triggering a political slugfest and calls for intensification of the agitation against the new farm laws.

On Thursday, Haryana police used heavy construction equipment to position boulders as protection for their barricades and employed crowd-control vehicles to prevent the farmers approaching Delhi. This, after drenching the marching farmers from Punjab with water cannons on a cold and bleak Wednesday.

The Haryana police action attracted more publicity for the agitation, the sight of farmers drenched with water cannons drawing sympathy even from the chattering classes who are generally unmoved by such issues.

By Friday morning, heavy police deployment was in place at Singhu border, a possible entry point for farmers coming from Punjab and Haryana can enter the city. Five sand-laden trucks, barricades with barbed wire and three water cannons had been stationed to stop tractors being driven by the protesters. Also, drones had been deployed to keep a tight vigil to maintain law and order, police said.

Another officer said barbed wire fencing was used at the Singhu border near the first barricade so that the protesters do not break the barricades put up by security personnel.

By Friday morning, traffic had been diverted at several places along the national capital's border in view of the protest. Checking of vehicles has also been intensified at the Delhi-Gurgaon border leading to heavy traffic jams.

CISF personnel have also been deployed on the Delhi-Gurgaon border.

"In view of the rally/ march/protest by All India Kishan Sangharsh co-ordination committee, the traffic police is diverting traffic from Mukarba Chowk & GTK road. Traffic is very heavy in this area," it said.

It further requested commuters to avoid Mukraba Chowk Delhi as there is diversion and vehicles are not being allowed towards Singhu border. However, inter-state vehicles are suggested to take Western/Eastern peripheral expressway.

"Tikri Border is completely closed for traffic movement by local police. Traffic intending to go towards Haryana is also closed. All motorists are advised to avoid this route in view of the protest by Kishan Sangharsh committee," the Delhi Traffic Police said in another tweet.

The Delhi Police has also sought permission from the AAP government to use the city's nine stadiums as temporary jails in view of the protest, government sources said.

Metro commuters in the city faced inconvenience as the Delhi Metro announced the closure of exit and entry gates at six metro stations on the Green Line in view of the 'Delhi Chalo' march.

Farmers' bodies said they will hold a dharna wherever they are stopped from moving towards the national capital.

Punjab farmers are demanding the repeal of the new farm laws, which, they said, should be replaced with another set of legislations framed after wider consultation with the stakeholders. They also want a guarantee on the minimum support prices.