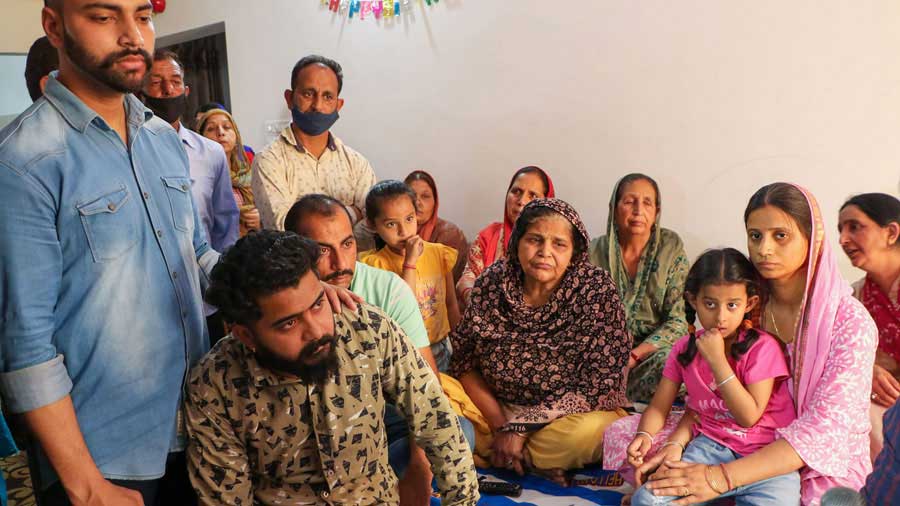 Family members of CRPF commando Rakeshwar Singh Manhas, who is missing from the site of encounter with the naxals in Chhattisgarh, at their residence in Jammu on Monday.
PTI
Imran Ahmed Siddiqui, Muzaffar Raina   |   Srinagar, New Delhi   |   Published 08.04.21, 02:02 AM

Maoists on Wednesday released a photo purportedly of the missing jawan of the CRPF’s elite CoBRA unit and said the commando was safe in captivity.

The picture shows a man in battle fatigues sitting on a piece of blue tarpaulin in what appears to be a tent made from dried leaves and bamboo poles. It was sent by the Maoists to local journalists in Chhattisgarh over WhatsApp.

The CRPF has officially not commented on the photo said to be of Rakeshwar Singh Manhas, missing since Saturday’s Maoist ambush in Chhattisgarh’s Bijapur district. A CRPF official said the jawan’s colleagues had said the photo looked old and he seemed to have no injury either.

The Maoists had on Tuesday signalled they were ready to negotiate the release of the jawan. In a statement signed by its spokesperson Vikalp, the banned Communist Party of India (Marxist) on Tuesday evening asked the government to decide on a mediator for the talks.

In the two-page letter, the Maoists said over 2,000 policemen had entered the Chhattisgarh village to kill their cadres, following which there was a counter-response. The “police jawans” were not their enemies, the Maoists said, adding that they were against the “anti-people” policies of the Narendra Modi government.

Twenty-four security personnel had died in Saturday’s encounter and over 31 had been injured, the statement said. It added that four Maoists had been killed. The Maoists also claimed to have seized 14 firearms and over 2,000 cartridges belonging to the security personnel.

In Jammu, the hometown of Manhas, the jawan’s family and scores of other residents hit the streets, wielding the Tricolour and shouting slogans, to press for his release.

“We felt compelled to come here (to protest). The government is doing nothing. For four days we have no clue where he is,” a woman who identified herself as Manhas’s mother and was among the protesters, told reporters in Jammu.

Meenu told the BBC it was the government’s responsibility to bring Manhas back.

Manhas’s brother said: “We appeal to the government not to waste time. Already four days have been wasted. He is in our country. In India, not in some other country....”