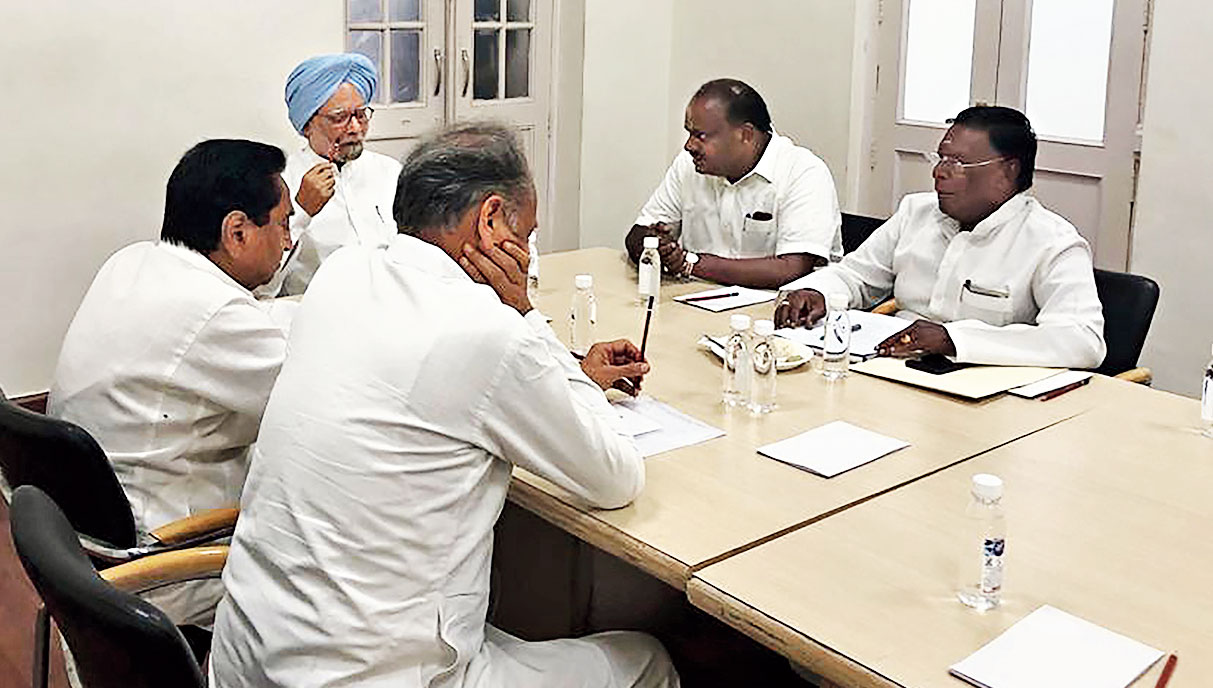 Congress chief ministers on Saturday laid stress on the need for a better approach by the Centre towards farm production and marketing to ameliorate the plight of farmers across the country.

Participating in the first Niti Aayog meeting after Prime Minister Narendra Modi won a second term, the Congress chief ministers said agriculture was going through a grave crisis for want of an adequate support system and structural reforms in marketing. They also demanded a sensitive policy in tribal areas, instead of encouraging reckless exploitation of resources.

The Congress chief ministers were briefed by former Prime Minister Manmohan Singh before the Niti Aayog meeting. Karnataka chief minister H.D. Kumaraswamy, along with chief ministers from the Congress, attended the meeting called by Manmohan, signalling a commitment to the alliance amid recurring differences between the partners.

Although Punjab chief minister Amarinder Singh could not come to Delhi as he is unwell, the chief ministers of Madhya Pradesh, Rajasthan, Chhattisgarh and Puducherry discussed the issues of their states, possible solutions and policy initiatives with the former Prime Minister. Manmohan guided them on the issues to be raised at the Niti Aayog meeting.

Sources said the topics discussed at the meeting with the former Prime Minister included greater commitment to address agrarian distress with innovative measures in marketing and storage facilities, revival of rivers and water bodies, amendments to the Forest Act to check displacement of tribal people and efforts to bring investments in Maoist-affected areas. The chief ministers also raised state-specific concerns.

Later, Madhya Pradesh chief minister Kamal Nath said at the Niti Aayog meeting that all states should reform agriculture marketing to ensure farmers get fair and remunerative prices for their produce. He suggested amendments to the Agriculture Produce Marketing Committee Act, improvement in e-payment system, grievance redress mechanisms and the need for adopting a seamless system through which import and export of farm commodities is streamlined to benefit the farmers.

Nath outlined the steps being taken by his government for rain-harvesting and drought management. Karnataka chief minister Kumaraswamy asked the Centre to extend the GST compensation beyond five years, saying that the state will face a severe financial crunch after the recompense period ends in 2022.

“While the revenue gap is being bridged by the assured compensation till 2022, the state has limited scope to mobilise additional revenue thereafter. It is evident that at the end of 2022-23, there will be a steep fall in revenues of the state as compared to the protected revenue of 2021-22 which would have accrued to the state due to the constitutionally guaranteed compensation. This would adversely impact development and other infrastructure projects in states,” Kumaraswamy said.

Rajasthan chief minister Ashok Gehlot called on finance minister Nirmala Sithararam and complained that states were facing several financial issues with the Centre over the past few years. He said: “To ensure no dearth of funds for various development projects, the states should be allowed to take loans up to 4 per cent instead of 3 per cent of the Gross State Domestic Product. The Centre should make the procedure easier for the states to take loans from the open markets.”

He said the delay on part of the Centre to give approval for taking loans was hampering ongoing development projects.