Advertisement
Home / India / 'Mandal versus Kamandal' politics to play out in big way in Bihar after Nitish's switch: Political analysts

'Mandal versus Kamandal' politics to play out in big way in Bihar after Nitish's switch: Political analysts

Return of the plank set to return 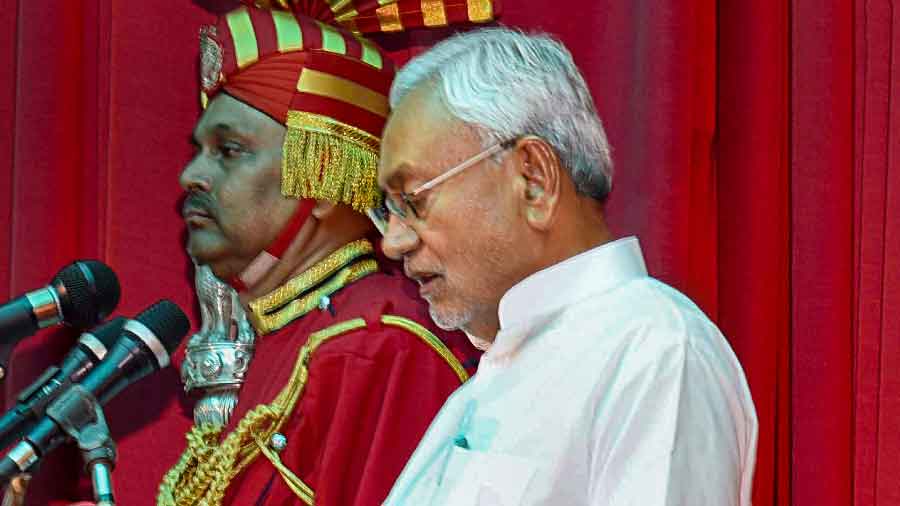 With Nitish Kumar forming the Mahagathbandhan 2.0 government after dumping the BJP in Bihar, political observers on Wednesday said the 'Mandal versus Kamandal' politics is likely to play out in a big way in the politically crucial state ahead of the 2024 general elections.

The term 'Mandal-Kamandal' gained centrality in the mid-90s in the complex political landscape of two Hindi heartlands --Uttar Pradesh and Bihar--and has been used by regional parties, which mainly stuck to caste-based politics, and the BJP, which strongly followed the Hindutva ideology.

'Mandal' is a term often referred to politics involving Other Backward Classes (OBCs) and Scheduled Castes. It has its origins in the Mandal Commission which was established in 1979 by the Janata Party government to "identify the socially or educationally backward classes" of India. 'Kamandal', a water pot often used by spiritual leaders, has over the years become a metaphor for Hindutva politics.

Congress MP from Bihar's Kishanganj Mohammad Jawaid said the BJP's juggernaut has always been stopped in Bihar as the people of the state are intellectually and politically very aware and they understand that communal forces cannot be potent in governance and do not have a development-oriented agenda.

Asserting that the political development in Bihar is likely to have wider implications nationally, he said regional parties are here to stay.

"During the Independence movement, it was in Champaran that the movement got impetus and people of Bihar were very active in Quit India movement as well, so Bihar has always shown the way to the country," he told PTI.

He also referred to BJP chief J P Nadda's reported comments on regional parties recently and said such parties were here to stay and there is space for everyone in India's political landscape as it is a country that is huge and diverse.

Sanjay Kumar, political commentator and a professor at the Centre for the Study of Developing Societies, said the 'Mandal versus Kamandal' politics will be back in focus to a great extent in Bihar.

However, he said the 'Mahagathbandhan' will be clever not to use the 'Mandal' or its social coalition as a plank for the 2024 Lok Sabha polls.

"The axis would be pro-Modi and anti-Modi and around that narrative, they (Mahagathbandhan constituents) will try to mobilise the OBCs. This will be Mandal 2.0. It will be different from Mandal 1.0 which involved aggressive OBC mobilisation. They will try to keep this at a low level and try to use larger narratives to counter Narendra Modi," Kumar told PTI.

Asked whether there is also a message in the developments in Bihar that the regional parties are here to stay and it will not be easy for the BJP to do what it did in Uttar Pradesh by trumping regional rivals, he said this will only be answered by what happens in 2024.

"But at the moment, yes, the regional parties have sent out a strong message that what happened in Maharashtra cannot be done in Bihar. That message has been sent out very clearly," he said.

The Maha Vikas Aghadi government comprising Shiv Sena, the Nationalist Congress Party and the Congress was brought down and was replaced by a government of Shiv Sena breakaway faction led by Eknath Shinde and the BJP.

Manindra Nath Thakur, an Associate Professor at the Jawaharlal Nehru University's Centre for Political Studies, said the 'Mandal versus Kamandal' politics will come back in a big way.

"Definitely the RJD and the JD(U) will emphasise this issue. Mandal is very important for them," he told PTI.

However, he also said that in the last 10-15 years things have changed a lot as BJP has made some inroads into OBC and Dalit population, so it will not be so easy for RJD-JD(U).

He also said that the developments in Bihar also show that the notion that regional parties will be wiped out is not correct.

"They are here to stay. BJP should also learn that ignoring pre-poll partners is not a great idea," Thakur said and added that Bihar has always stopped BJP's juggernaut.

Thakur also said the BJP's plank of organising Hindus together also does not work in some areas in Bihar areas because of the caste configuration there.

Observing that the developments in Bihar will have national implications, political commentator Rasheed Kidwai said,"if the alliance meets its logical conclusion, Tejashwi Yadav could take over in Bihar and Nitish could be the Opposition's choice for 2024. What seemed like a one-horse race could become interesting."

On Tuesday, a day filled with high political drama, Chief Minister Nitish Kumar severed ties with ally BJP and embraced the Mahagathbandhan or grand alliance, bringing the spotlight on the complex matrix of politics in Bihar.

Kumar took oath as the Chief Minister of Bihar for the eighth time along with RJD's Tejashwi Yadav, who is set to be designated his deputy.

The development came five years after Kumar had exited the Mahagathbandhan and formed the government with the BJP in 2017. Kumar came back to power in the 2020 polls with the BJP as an alliance partner.